It is no secret that we are fans of Jeri Smith-Ready. She has blogged with us before and Ana recently fell in love with her YA novel Shade (reviewed here). And to celebrate the UK release of Shade -out now – we invited the author to talk about Inspirations, Influences and the music behind the book. 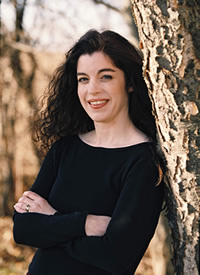 So, please y’all, give it up for Jeri!

Disclaimer to Book Smugglers’ Readers: The more I care about a topic, the less coherently I can write about it, because I get all intimidated. This month I set out to pen the world’s most inspirational post about music and writing—because, you know, THAT’s a specific, achievable goal—but ended up focusing on what I knew best: me, my books, and my drooling fandom over the bands I love.

Yet many of us can’t resist. Most of my all-time favorite books feature music, including some lovely YA novels from the last few years: I WANNA BE YOUR JOEY RAMONE by Stephanie Kuehnert, FRETS & STRUTS by Jon Skovron, IF I STAY by Gayle Forman, THE SKY IS EVERYWHERE by Jandy Nelson, and NICK & NORAH’S INFINITE PLAYLIST by Ruth Cohn and David Levithan.

Each of my own urban fantasies has a musical focus, whether it’s classical (REQUIEM FOR THE DEVIL), punk/indie (the SHADE series), or various eras of rock ‘n’ roll (the WVMP RADIO series). I can’t help it. Writers are always told to “write what you know.” But I say, write what you love.

Even authors who don’t write about music are inspired by it. It makes sense, because some of the best music tells a story—a love found, a heart broken, a hero fallen. So it automatically puts us in a story-telling frame of mind.

Music also works at a deeper level, forcing us to focus on our feelings. When I sit down to write, my mind is scattered in a million directions: Did I mail that prize yet? Is my cat’s medicine working? Who’ll win the big game on Sunday? (And most important: are there any bagels left?)

But the perfect song can drop me right into a character’s struggles. It goads me to dig deep and not gloss over their pain with an easy joke or a stale cliché. Music, even more than mere words on a page, can slice our guts with the right turn of phrase.

So for my I&I post, it made sense to talk about some of the music that has influenced my writing. (It was either that or soap operas.) The hard part was figuring out where to start. Which bands? Which novels?

But since my YA debut, SHADE, just came out in the UK on 2 September, I decided to focus on three bands with a British or Irish connection, and by doing so, trace the progression of SHADE from idea to novel to series. 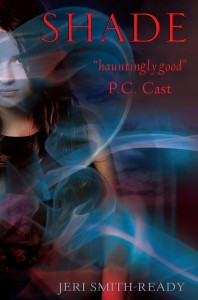 In the beginning, there was Flogging Molly….

Soon after I got the original idea for SHADE, I decided that the main character (Aura)’s soon-to-be-dead boyfriend Logan would be in a band. (Figuring out a story’s connection to music is usually when the idea goes from hmm-maybe vague to OMG-must-write-now specific.)

Since I’d just discovered the magic of modern Irish punk rock, I modeled Logan’s band, the Keeley Brothers, after Flogging Molly (who are technically American, but their lead singer is Irish, so I’ve decided they count). As I wrote the first few chapters, I watched their videos again and again, hoping to capture their amazing energy and reproduce it on the page. Like this video, of their performance of “Seven Deadly Sins”:

In writing the concert sequences, I wanted readers to feel like they were there in the middle of the crowd. (Insider tip? It’s really hard to write about a concert without overusing the word “crowd.”)

Most of my novels have a particular band that helps shape the story and mood, a band I consider the “patron saint” of that book. For Shade, it was Northern Ireland’s Snow Patrol.

One day early in the novel-writing process, I heard “Chasing Cars” over the PA system at a local store. I’d heard it many times before (it was a pretty big hit at one point), but for some reason that day its haunting notes literally stopped me in my tracks. I knew right then that the song would sum up Aura and Logan’s relationship, especially after he died. I even wrote it down on the back of my receipt so I wouldn’t forget.

As I finished writing each draft of the book, I played Snow Patrol’s last three CDs on infinite repeat. This way I’d keep the focus where it belonged: on the feelings of hope and love in the face of a horrible loss. Plus, their lyrics reminded me to search for simple, original, eloquent ways to describe those feelings.

Here’s the video, although personally this is a song I like to hear and not see. It’s a song for staring off into the distance. But hey, it’s up to you.

I first heard of the London band Mumford & Sons from a reader, Karen, who runs the book blog For What It’s Worth. She told me that the music on their debut release, SIGH NO MORE, made her think of Logan. Not just one song, but the entire album’s mood, attitude, and themes.

(By the way, nothing warms this author’s heart more than hearing that a song reminds someone of a character. It blows me away that my fake people can live in a reader’s head and heart long enough to form connections to things outside the book.)

So of course I had to see what she was talking about. Immediately I could tell that Mumford & Sons was no casual background listen. Their music reached down my throat, yanked out my heart, and proceeded to gnaw on it, snarling and licking its chops. For several weeks, I couldn’t even give the CD a second listen. I was not “emotionally equipped,” as they say.

But I knew when I would need it. Karen had deemed M&S to be Logan’s band, so who else would I listen to when writing his own short story? SHADE and its sequel SHIFT are told from the point-of-view of Logan’s girlfriend Aura, but now I had to get inside his head. I had to imagine what it would be like to lose everything. To see and hear your loved ones but never touch them. To be invisible.

So when I opened up my computer to start the story, I played SIGH NO MORE. And played it. And played it. Probably five or six times a day as I wrote about Logan’s attempt to communicate with the older brother who couldn’t hear or see him. The brother whose guilt and anger over Logan’s death was driving him near suicide.

The entire CD is magnificent and beautiful, but its lead single, “Little Lion Man” brings the brothers’ relationship to life (painfully, of course, but there’s beauty in pain).

(Speaking of explicit lyrics, I love the way Londoners drop the f-bomb, adding three or four f’s to the beginning of the word. They really mean it!)

As a bonus, here’s Mumford & Sons playing the song that makes me cry EVERY time, “White Blank Page,” during one of their very cool Bookshop sessions.

While I don’t need music to form sentences, build a plot, and create characters, I think that without it, my books would be emotional duds. That’s why today I’ve submitted this as the dedication appearing in the front of SHIFT:

To those who make music.
Many books—many lives—would be impossible without you.

So there, I’ve tried, flailingly, to talk about music and writing. I have another file with several pages worth of paragraphs I’ve deleted from this post. They’ll probably show up someday in an eloquent, encyclopedic book entitled MUSIC AND WRITING: SOME STUFF ABOUT THEM.

Visit the SHADE music page on my website to hear the full soundtrack to the novel. You can follow me on the new iTunes social network Ping (where my username, shockingly, is “Jeri Smith-Ready”) to see what I’m listening to, purchasing, and currently loving. Or follow me on Twitter (http://twitter.com), because I’m almost always there, and always looking for new music.

We have FOUR COPIES of Shade to give away! The contest is open to EVERYONE and will run until Saturday, September 18, 11:59PM (PST). To enter, leave a comment here telling us about your favourite band or favourite song. We will randomly select the winner and will announce it this Sunday in our weekly Smugglers’ Stash. ONE entry per person please – multiple entries from the same ISP will be disqualified. Good luck!

The Magnificent 12 Blog Tour Clue #8: Meet Xiao of The Trap