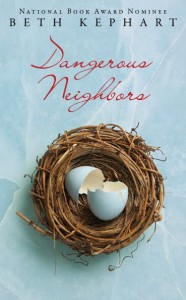 Could any two sisters be more tightly bound together than the twins, Katherine and Anna? Yet love and fate intervene to tear them apart. Katherine’s guilt and sense of betrayal leaves her longing for death, until a surprise encounter and another near catastrophe rescue her from a tragic end. Set against the magical kaleidoscope of the Philadelphia Centennial fair of 1876, National Book Award nominee Beth Kephart’s book conjures the sweep and scope of a moment in history in which the glowing future of a nation is on display to the disillusioned gaze of a girl who has determined that she no longer has a future. The tale is a pulse by pulse portrait of a young heroine’s crisis of faith and salvation in the face of unbearable loss.

Why did I read this book: I heard nothing but praise for Beth Kephart’s books and I saw this post by Amy on The Beth Effect and thought it was about time to read one of her books and when I got a copy of this book in the post, I was more than happy to give it a go.

Dangerous Neighbors is my first Beth Kephart book and it I thought it was a lovely, albeit short, introduction to the author’s exquisite writing. It’s a historical novel, set in Philadelphia, during the 1876 Centennial Exhibition where Katherine goes to say goodbye to the world, or perhaps even more, goodbye to her late sister.

The story is an exploration of grief from the perfective of Katherine after her twin sister Anna has died and it deals with the aftermath of her death and the feelings of loneliness, loss and guilt as well as flashbacks to Anna and Katherine’s relationship in the months before the tragedy occurs. The two always had a tight bond but once Anna falls in love with a baker boy, the sisters start to grow apart and it is in this elusive world of the “growing apart” that the majority of the story takes place both when Anna was alive and ultimately after she is dead as Katherine examines the past and the bleak future.

I loved, since I love this type of narrative, how Katherine’s is a bit of an unreliable narrator because the story is of course, tempered by her view of the world, by her deep love for her sister, and how she perceives their relationship to be. Where does their difference lie? Anna although gone when the story starts and present only in flashbacks from Katherine’s point of view is as much as an in-depth character as it can be: but is Anna really how Katherine paints her to be or is she someone that is just deeply different from her sister, perhaps more adaptable and more modern?

Dangerous Neighbors is a novel of grief – so sad and so fraught with unimaginable fear as well, because even though Katherine can’t see her life without her sister, she actually does love living, perhaps in a different way than Anna did. It is a novel about the dichotomy between the old and the new which is deftly explored in the relationship between their mother (a suffragist) and their father (who is afraid of “dangerous neighbours”) , in the setting of the world of wonders that was the Centennial fair and in the new reality of Katherine’s life now without the security of her bond with her sister, which was a bond of love but also of self-imposed duty.

It is a beautiful, so beautiful, story of one’s unravelling, of sour realisation and self-awareness: it begins with a fragmented Katherine and ends with a Katherine in the way to putting the pieces back together (although not all pieces).

This is a precious little gem, and I loved it.

That night Katherine gave up trying to talk sense into Anna. That night she did not try to argue her twin sister out of her gargantuan joy; she did not try to save her. It was on New Year’s Eve that Katherine decided to begin to look the other way on purpose, but this time without anger, without the intent to prove a point. She decided to stop protecting Anna, so that she might love her more truly.

Verdict: I feel that Dangerous Neighbors was a great introduction to Beth Kephart’s writing: it is a lovely gem, full of in-depth characters, an exploration of grief which is of course, as some of the best books about grief, a book about life. Very Good.

Reading Next: The Disreputable History of Frankie Laundau-Banks by E. Lochart