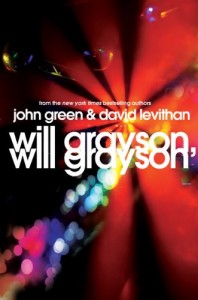 One cold night, in a most unlikely corner of Chicago, two teens—both named Will Grayson—are about to cross paths. As their worlds collide and intertwine, the Will Graysons find their lives going in new and unexpected directions, building toward romantic turns-of-heart and the epic production of history’s most fabulous high school musical.

Hilarious, poignant, and deeply insightful, John Green and David Levithan’s collaborative novel is brimming with a double helping of the heart and humor that have won both them legions of faithful fans.

Why did I read this book: Because I loved the book I read by John Green – An Abundance of Katherines and I wanted to see about David Levithan

How did I get the book: I requested a review copy

This is the tale of two Will Graysons.

One Will Grayson is the teen who lives with his mother, he is depressed, poor, and friendless, except for a girl named Maura. He is also a closeted gay currently in love with a guy named Isaac whom he met online and chats with, everyday.

The Other Will Grayson is the son of absent (due to their work as doctors) yet loving parents; his best friend is Tiny Cooper, the most flamboyant gay ever. This Will lives by his two rules: 1) don’t care too much, and 2) shut up.

The One Will Grayson sounds like this – never in capital letters:

i am constantly torn between killing myself and killing everyone around me.

those seem to be the two choices. everything else is just killing time.
right now i’m walking through the kitchen to get to the back door.

mom: have some breakfast.

Will Grayson, Will Grayson has a lot going for it. The concept of the two guys with the same name with stories running in parallel, until they converge briefly only to diverge again, is great. The two writers have different writing styles which are evident by the obviously different voices making the characters sound nothing alike. Then there are the characters:

On one side: you have John Green’s Will Grayson, the geeky, dorky type with his absurd rules of engagement (or lack of) . I have only ever read one John Green book before (the awesome An Abundance of Katherines) but I can already sense a pattern with JG’s boys: in behaviour, in wanting the girl, in having the overwhelming best- friend- who-steals-the- scene. This Will Grayson is typical – typical John Green which means: he is a typical teenager who might have good or bad reasons to behave as he does but whose coming of age and change of heart is there in the end. And when I say typical, I am not attaching any negative connotations because, if there is one thing that John Green can write is the typical teen.

On the other side, David Levithan’s Will Grayson is less typical. There is his struggle with his depression and the self-awareness that he might be broken inside and with only his pills to make him stable. He is also, the more interesting of the two Will Graysons. He was the one I connected with, the one who made me cry – in one particular scene I wanted to scream with him and add my voice to his stress.

Ultimately though, and you will have to excuse the cheesiness, this is a book about love in all its forms: about falling in love and falling out of love; about loving your family – and the families are mostly normal families with supportive parents – and your friends; about realising that love does not equal sex and it is ok to love platonically; it is about acceptance: love for oneself, even if you are depressed, gay, fat. As a coming of age story for both Will Graysons, it is definitely a strong, perfectly enjoyable read. It carries a beautiful message delivered with a lot of quirky humour and it works for the better part.

However. There is the not so tiny, Tiny Cooper. I have no doubt that most of the reactions to Will Grayson, Will Grayson will be directly connected to the reader’s connection or not, with Tiny Cooper. He is the character who steals loads of scenes because he just is: larger than life, interesting, and arguably, the best character in the entire book. But he is also the epitome of how you can have too much of a good thing.

He is undoubtedly the catalyst for both Will Graysons’ epiphanies. When the two stories converge, it is Tiny Cooper who connects the two narratives, rather than having the two Will Graysons interacting with each other. He is the voice of reason who gets through to Gay Will Grasyon for example. Tiny is also totally self-centred and egotistical and yet still completely, absolutely lovable. He is master at dealing with hearbreak because he has had so many. He can see through people especially the two Will Graysons but he has a problem letting people see through him. And most of the plot revolves around a musical extravaganza he is about to stage at school about….Tiny Cooper. And his love life. And how he is so awesome.

And this is where things get rough: the ending of the book, which is largely about the high school musical to end all high school musicals, is completely, impossibly over the top, cheesy and unrealistic. It is a love- it or hate- it kind of ending. Part of me loves it because of its OTT cheesy grandeur. But for a book that deals – and deals well – with important issues like depression, coming out, acceptance and love in a thought-provoking and heartfelt way, the not-so-believable ending for me, sort of robs the book a shot to be one of the Great Ones.

Notable Quotes/Parts: One of the Will Graysons’ first kiss with a boy:

tiny: I never kiss on the first date.

i look at him with total incomprehension, and the he adds.

so now my shock from before is turning into a different kind of shock, and it’s a charged shock, because at that moment, even though he’s enourmous, and even though he doesn’t know me at all, and even though he’s taking up roughly three times more of the bench than I am, tiny cooper is suprisingly, undeniable attractive. yeah, his skin is smooth, his smile is gentle, and most of all his eyes – his eyes have this crazy hope and crazy longing and ridiculous giddiness in them, and even though i think it’s completely stupid and even though i am never going to feel the things that he feels, at the very least i don’t mind the idea of kissing him and seeing what happens. he is starting to blush from what he’s said and he’s actually too shy to lean down to me, so i find myself lifting to kiss, keeping my eyes open because i want to see his suprirse and see his happiness because there’s no way for me to see or even feel my own.

Verdict: A lovely, well-written story of two kids named Will Grayson with very real, believable issues including how to deal with one’s homossexuality and depression. Despite its over the top cheesetastic ending, I really loved Will Grayson, Will Grayson.

Rating: 7 – Very Good (just short of being a 8 because of the ending but I think that is definitely a matter of taste)

Reading Next: The Summer of You by Kate Noble

Over at Kirkus: Courting Magic by Stephanie Burgis

Over at Kirkus – THE SEVENTH BRIDE by T. Kingfisher