We have a very special giveaway today. To celebrate the recent release of Pleasure of a Dark Prince by Kresley Cole, the newest in her Immortal After Dark series, we are proud to announce that Simon and Schuster are giving away TWENTY copies of the novel especially to our readers!

Here is the rundown. 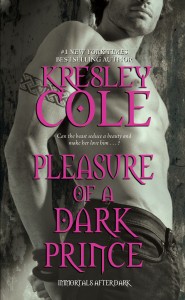 Pleasure of a Dark Prince

Stand alone or series: Installment 9 in the Immortals After Dark series

#1 New York Times bestselling author Kresley Cole enraptures again with this seductive tale of a fierce werewolf prince who will stop at nothing to protect the lovely archer he covets from afar.

Lucia the Huntress: as mysterious as she is exquisite, she harbors secrets that threaten to destroy her — and those she loves.

Garreth MacRieve, Prince of the Lykae: the brutal Highland warrior who burns to finally claim this maddeningly sensual creature as his own.

THAT LEAD TO A PLEASURE SO WICKED….

From the shadows, Garreth has long watched over Lucia. Now, the only way to keep the proud huntress safe from harm is to convince her to accept him as her guardian. To do this, Garreth will ruthlessly exploit Lucia’s greatest weakness — her wanton desire for him.

Before becoming a writer, Kresley Cole was a world-ranked athlete and Master’s grad. Since her first novel was published in 2003, she has sold a total of fifteen books and two novellas in two different subgenres, and has seen her releases translated into ten foreign languages.

Cole followed her highly acclaimed Sutherland Series historicals with the bestselling MacCarrick Brothers Series, a trilogy of Highlander historical romances, as well as the continuing Immortals After Dark Series, a RITA award-winning paranormal romance collection, all with Pocket Books.

In January 2009, Cole became a #1 New York Times and Publishers Weekly bestseller with her sixth IAD installment, Kiss of a Demon King.

She lives in Florida with her husband and far, far too many dogs.

We have 20 copies up for grabs! To enter, simply leave a comment here tellings us which Immortal After Dark book is your favorite . Contest is open to all and runs till the end of the day today, March 6th, 11:59 (PST). Only ONE comment per person! Multiple entries will be automatically disqualified. Good luck!