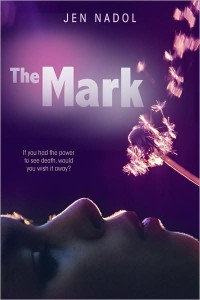 Stand alone or series: Book one in a planned series.

Cassandra Renfield has always seen the mark—a glow around certain people reminiscent of candlelight. But the one time she mentioned it, it was dismissed as a trick of the light. Until the day she watches a man awash in the mark die. After searching her memories, Cassie realizes she can see a person’s imminent death. Not how or where, only when: today.

Armed with a vague understanding of the light, Cassie begins to explore her “gift,” seeking those marked for death and probing the line between decision and destiny. Though she’s careful to hide her secret—even from her new philosophy-obsessed boyfriend—with each impending death comes the temptation to test fate. But so many questions remain. How does the mark work? Why is she the only one who sees it? And finally, the most important of all: If you know today is someone’s last, should you tell them?

Why did I read this book: The idea of being able to predict death, the age-old question of fate versus free will, destiny versus choice – it’s a juxtaposition that has sparked debate throughout human history. When I read the blurb for Jen Nadol’s debut effort, I was instantly intrigued – Ms. Nadol attempts to take on this question head-on with her young adult novel, and I had to see how it all would play out.

When Cassandra was six, she saw it for the first time. A steady glow, surrounding a group of children on the school playground. By the end of the day, all those children were dead – killed in a fatal bus accident. Since that day, Cassie has seen the telltale mark a few times over the course of her young life, ignoring it and refusing to believe in what it may signify. When she turns sixteen, however, Cassie faces undeniable evidence of the mark’s true meaning. She follows a man on the bus bearing the glow, and watches his gruesome demise in a street accident. Unable to ignore her “gift” any longer, Cassie must face her incredible ability and decide if she can (or if she should) try to change the future. When she is sent to stay with her last living relative for the summer, Cassie turns to the past for answers. She researches her own parents’ deaths (both were killed in a car accident when Cassie was just two-years old), and audits the local university’s introduction to philosophy course. And what Cassie discovers, about herself, her past, and her gift holds deeper implications than she ever could have imagined.

The Mark is Jen Nadol’s debut novel, and she certainly makes a memorable first impression. Though the actual premise isn’t anything particularly groundbreaking, Ms. Nadol’s take on the age-old debate between predestination and choice is gripping stuff. Even better, Ms. Nadol goes beyond the gimmick of knowing when someone will die – she makes her protagonist, young Cassie, confront the actual moral issues involved, too. The result is a much more comprehensive picture: beyond the surface-level question, “Can I prevent this death from happening?” Cass asks herself the more thoughtful and ambiguous question, “If I can prevent it from happening, should I do it?” I loved the idea that a teen heroine when faced with this incredible gift/curse would want to understand all of the moral implications of her actions, and enroll in a college-level philosophy class – not to mention, the class is a very clever way for Ms. Nadol to explain different philosophical schools of thought without data dumping (or relying on some terrible, contrived google search/library research scene – you know the kind I’m talking about. In movies, for example, when the intrepid heroine runs a search for “Springfield Farmhouse Dead Girl Cold One” or opens a random old book in the library and magically finds a specific chapter titled, “Farmhouses Under Gypsy Curse And How To Break Said Curse.” But I digress…). In terms of writing, Ms. Nadol’s style is simple and direct, making a quick read of The Mark‘s 240 pages. Though there’s a lot of predictability to certain elements of the story from very early on, the strength of the characters and the underlying moral issues are more than enough to make up for any shortcomings in terms of finesse or subtlety in plot.

Cassandra (a dead giveaway kind of name) is a fantastic heroine. She’s quiet, thoughtful, intelligent but still very much the uncertain teen coping with an impossible ability that is so much larger than herself. Cassie comes to informed decisions on her own and doesn’t take crap, even though she’s not especially assertive – making her all the more admirable as a heroine. I especially appreciated that there is no enduring truest of true love relationships tied to her supernatural ability. Cassie does have a romantic relationship with her T.A. – the nineteen-year old Lucas, and I really liked the way Ms. Nadol handled this aspect of the story. Cassie, in her first real serious relationship is the sixteen-year old pretending to be two years older (which I’m sure many female readers can empathize with!), and her relationship with Lucas feels incredibly genuine (and familiar) – not idealized or candy-coated in any way. I love how grounded and real all the relationships were, for that matter, be it between Cass and Lucas or Cass and her estranged, workaholic aunt. No sparkles, no contrived heart to heart confessionals, just…reality. It’s incredibly refreshing.

And then, there’s the actual thing that got me picking up this book in the first place: the Great Dilemma, Fate versus Free Will. The very existence of the titled mark holds numerous implications, and raises many intriguing questions, implicitly. Is everything predestined? Is the timing of a person’s death fixed, ever unchanging? Or is what Cassie sees a mere signifier and something she can change? And, of course, if that is the case and Cassie can change a person’s destiny, should she do it? And at what cost?

I will not spoil you, dear readers, but rest assured that all of these questions are addressed, and they are very, very interestingly handled. The Mark‘s last third is truly incredible stuff, and the implications of that final revelation, those last 30 pages or so, is made. of. awesome. Even if it wasn’t set up very well, I loved the direction Ms. Nadol took the ending of the story in. The implications this final revelation holds for future books in this series has me salivating. I can only hope that a sequel is underway, and will be available very soon. And by soon, I mean NOW.

There is nothing like the gut-hollowing experience of watching someone die, especially when you know it’s coming.

I saw the man with the mark at the bus stop on Wilson Boulevard when I crossed Butter Lane, as I did walking to school every day. I wanted to look away, pretend he wasn’t there and run for the safety of algebra and honors English, but I didn’t. I had promised myself. So I turned right and walked two blocks to the Plexiglas shelter, where we stood silently. It was a misty March day, the chill of winter still in the air. I slid my hand into the outer pocket of my book bag and felt for the change that always jangled around in there. I was counting out eighty-five cents for the ride when he asked, “You know when the B3 comes?”

His skin was smooth and his dark hair threaded with the slightest of gray. He was younger than I’d expected, than I’d have hoped. It limited the possibilities in an unpleasant way. I looked down, trying to ignore the hazy light that surrounded him.

Additional Thoughts: Make sure to stick around, as later today we interview Jen Nadol about her debut novel!

Verdict: No silly fluff here, Ms. Nadol’s debut novel grapples with some heavy issues, and I loved every second of it. The Mark is a book to be savored by deep-thinking readers…and I’m already eagerly awaiting the next installment in the series.

Reading Next: Unknown by Rachel Caine