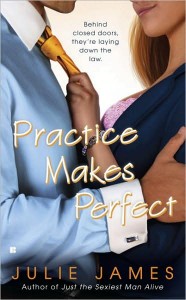 Summary: (from amazon.com)
When it comes to the laws of attraction, there are no rules The battle between the sexes is about to make these two lawyers hot under the collar. Opposites collide when two lawyers try to make partner at the same firm. Payton Kendall is a feminist to the bone. Cocky J.D. Jameson was born privileged. But when they’re asked to join forces on a major case, they gain a newfound awareness of each other’s personal assets. The partnership spot will be offered to only one of them, though. The competition heats up. Sparks fly. Let the games begin.

I’m always a little leery of starting a romance novel.

Don’t get me wrong – I love a little romance as much as the next person. But, more often than not, my forays into the romance genre for books have ended in disappointment. True, there are the outstanding Diana Gabaldons, Lisa Kleypases, and Loretta Chases of the world – but if we’re being perfectly frank, I find myself much rather preferring romance as a subplot; something ancillary to a more dominant storyline. So, it was with trepidation that I began Practice Makes Perfect…

The story is straightforward: Payton Kendall is a senior associate at one of the most prestigious law firms in Chicago. After slaving away, billing thousands of hours over eight years as a litigator, Payton is finally up for her hard-earned partnership – but there’s a catch. Because of a recent suit aimed at law firms for discrimination against their older partners (forcing them out of jobs to make cap room for younger associates), the firm has decided that it can only justify making ONE litigator a partner. For Payton, this means she has just come into direct, head-to-head competition with J.D. Jameson – a gorgeous, infuriating, silver spoon-in-his-mouth, bentley-driving, super-republican, old-money, squash-playing type. As J.D. is a workhorse (just like Payton), has never lost a case (just like Payton), and is one of the best attourneys in the nation (just like Payton), the competition becomes intense. When both J.D. and Payton are assigned on the same big-time anti-discrimination case, the two are thrown into close quarters, only intensifying the tension between them. After witty banter, intentional and unintentional stunts, and a whole lot of unresolved sexual tension, you can guess what happens next.

As I mentioned earlier, I was a little nervous going into Practice Makes Perfect – but from the first page of this delightful book, I found myself immersed and entertained. Ms. James’ novel is romantic comedy at its finest, featuring the always entertaining “enemies” falling in love storyline. Yes, there is a degree of safety and predictability in terms of plot, but when the banter is this much fun, it’s easy to put cynicism aside and allow yourself to get caught up in the happy-ever-after magic. If the plotting is somewhat straightforward and the characters cliched (the feminist/idealist female from the public school system versus the old money/legal legacy Ivy Leaguer male), the relationship that sparks between them is genuine and – did I mention? – oh so fun. The greatest strength of the novel lies in this spark between J.D. and Payton, and Ms. James shines with her quick, sharp dialogue – the witty repartee, if you will, between her two main characters. As top litigators, Payton and J.D. exchange some pretty good verbal barbs and engage in a number of entertaining power struggles. For example, my favorite scene would have to be in the law library, shortly after both discover that only one of them will get the partner gig. Observe:

“Are you saying that I don’t deserve this?” he demanded. “I’ve billed over twenty-nine hundred hours for the past eight years!”

Payton whipped around. “So have I! And the only difference between you and me is that statistics say you’re more likely to keep it up. The firm doesn’t worry that one day you’ll decide you want to leave at five to kiss your kids good night.”

J.D. stepped closer to her. Then closer again, literally trapping her against the bookshelves.

“Spare me the feminist rant, Payton. It’s getting a little tired. I’ve had to work my ass off to get where I am, while you had your ticket written form the minute you stepped into this firm.”

Payton felt her face flush with anger. “Really? Well, you know what I think, J.D.?” She jabbed his chest with one of her fingers. “I think that you are an uptight, pony-owning, trickle-down-economics-loving, Scotch-on-the-rocks-drinking, my-wife-better-take-my-last-name sexist jerk!”

J.D. grabbed her hand and pulled it away. “Well, at least I’m not a stubborn, button-pushing, Prius-driving, chip-on-your-shoulder-holding, ‘stay-at-home-mom’-is-the-eighth-dirty-word-thinking feminist!”

Witty, intense, and fun stuff. The ‘I-hate-you-but-I-like-you-but-you-make-me-so-ANGRY’ dynamic charges every scene between these two characters, and it’s delightful. Additionally, Payton and J.D.’s thoughts are revealed throughout the novel to the reader, and there are many scenes involving their inner dialogues – in which they refuse to admit, even to themselves, that they are falling in love with the competition. And all of these scenes are delectable good fun.

Furthermore, there’s a decided lack of mush in this book, which was an immense relief. The number one turnoff to romance novels for me is the uncomfortable level of mushiness. Well, that and the gratuitous, embarrassing, play-by-play sex scenes. Thankfully, neither of these are present in Practice Makes Perfect. There’s a healthy dose of sexual tension, attraction, and build-up – and when the sex does happen (which, inevitably, it does), it’s tasteful and non-cringe inducing. Ms. James balances romance with realism, which makes the novel even more effective.

Speaking of realism, it’s also worth mentioning that Ms. James captures the life of an associate in the legal profession in a completely convincing manner – and considering she is a former attorney and alumnus of the University of Illinois School of Law (as is her protagonist Payton), it’s no surprise that she writes with such authority.

In short, Practice Makes Perfect is a sweet, traditional rom-com, and one that will undoubtably have readers grinning as the pages fly by. I highly enjoyed it, and certainly recommend it to romance readers, and reluctant romance readers alike.

Notable Quotes/Parts: You can read an official excerpt from Chapter 2 online at Julie James’ website, HERE.

Additional Thoughts: Ana LOVED this book, and we’ve had author Julie James over for a number of guest posts. Check out her post about her Inspirations & Influences for Practice Makes Perfect, or her Smugglivus Guest Post for more information!

Verdict: Fun, witty, escapist entertainment at its best. I definitely enjoyed Practice Makes Perfect, against my own biases and prejudices! Julie James is a romance author that, to this reluctant romance reader, has just made the publication watch list.

Reading Next: Moonseed by Stephen Baxter