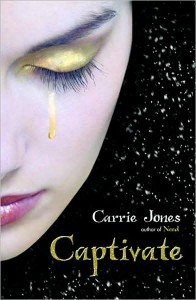 Zara and her friends knew they hadn’t solved the pixie problem for good. Far from it. The king’s needs grow deeper every day he’s stuck in captivity, while his control over his people gets weaker. It’s made him vulnerable. And now there’s a new king in town.

A turf war is imminent, since the new pixie king, Astley, is moving in quickly. Nick nearly killed him in the woods on day one, but Zara came to his rescue. Astley swears that he and Zara are destined to be together, that he’s one of the good guys. Nick isn’t buying it, though Zara isn’t as sure — despite herself, she wants to trust the new king. But it’s a lot more than her relationship with Nick that is at stake. It’s her life — and his.

Stand alone or series: Book 2 in the ongoing “Need” series

Why did I read this book: I truly, honestly enjoyed Need, book 1 in the series, despite some questionable character motivations and plot inconsistencies. In spite of these problems, I found myself eagerly reaching for Captivate, hungry for more from Ms. Jones.

**PLEASE NOTE: This review contains spoilers for Book 1, Need. If you have not read Need or do not wish to be spoiled, YOU HAVE BEEN WARNED!**

Well, I can safely say that Captivate outdoes Need – in a very good way. After successfully entrapping all the pixies, including her biological father, deep in the surrounding woods, Zara and her friends have a brief respite from constant danger. But every day, Zara knows they are living peacefully on borrowed time – as her father, the Pixie King, weakens further, the Pixies grow more violent and desperate. And then more pixies begin to show up, including another Pixie King, named Astley. Zara’s boyfriend, the werewolf Nick manages to injure the newcomer pixie, leaving him for dead and bound in iron – but Zara, pacifist and humanitarian to the core, stumbles across him in the woods and decides to free him before he is taken away by a mysterious, fierce woman-creature that calls herself a Valkyrie. Zara feels an inexplicable connection to Astley, and though she might not trust him, she starts to listen when he says that not all pixies are twisted and evil, and that he comes to preserve balance before another, darker, sadistic Pixie King attempts to take over. Torn in indecision, soon Zara finds herself in the middle of a war; and she must make a choice if she is to save all those she holds dear.

While Need had some sizable holes, Captivate goes a long way in resolving a lot of these general plot and nonsensical issues. Some of the criticisms and questions I was left with finishing book 1 (i.e. why didn’t weres Nick and Devyn smell out the pixies at school?) were addressed here, rounding out and adding a level of cohesion to the overarching story and world. Even cooler, however, is that Captivate takes a dramatic turn and develops a clear direction for the series. A whole lot happens in this second novel, and it feels much more planned and fleshed out than its predecessor. I loved that a war is brewing (actually, there are two wars brewing, with the Valkyries dragging slain warriors off to Valhalla to fight with Odin in Ragnarök – to be examined in book 3, hopefully), and that the simple solution of imprisonment presented in Need has dire consequences in Captivate. There’s also one very shocking turn of events in this book that I did not see coming – frankly, few authors in any genre have the gall to go where Ms. Jones does, especially not so early in a series – and all I can say is: ME LIKEY.

As the plotting has improved in Captivate, so too have the characters. If you read the review Ana and I wrote for Need, you might have picked up on my annoyance with Zara and her TSTL tendencies. In this second book, I finally felt like I was able to connect with Zara as a character – she manages to stand up for herself in a way that resonated with me – I loved this pivotal scene with her friends:

[Gram] whirls on me and Issie. “I can’t believe you two did that. You cannot trust pixies.”

“You’re not a pixie. You’re human.” She snaps her medical kit shut.

“Right. So that’s why my skin is blue.” My stomach threatens to knock a hole through my skin and leave my body in protest.

“Zara…” Nick’s voice is a warning.

“They are mood altering,” Devyn agrees.

“I am not snippy. I’m mad because nobody is listening to me.” My hands ball into fists. “What? Just because you don’t want to believe it, Nick, doesn’t mean it isn’t true. I remember how you acted when you found out who my father is. I remember you running away, okay? I know how you totally hate pixies and if I’m a pixie that obviously means that you -”

His arms reach out to me, but his hands are fists. “Zara -”

“Just. Don’t. Say. Anything.” I stare at all of them, take a step back. “Nobody say anything. This is not your problem. This is my problem. Mine. I’m the freak here. Me.”

I loved that all of the characters in this book are challenged and grow – for better or for worse. Nick and Zara’s relationship is disgustingly sappy (they are THAT couple – you know the ones, you remember them, the PDA-aholics from high school), but it’s believable sap. Even when they call each other “baby” and “sweetheart,” it rings as genuine as they are two characters in the throes of young, first love. I loved that Nick is bossy and domineering and an alpha-jerk at times, because it’s in his nature as a lone were and as a dude with an enormous ego and hero complex. Even better, I love that Zara recognizes this, calls him out on it, and yet loves him for it anyway. There’s a lot of the ridiculous in this book, but the characters are self-aware of this ridiculousness (which makes it if not completely ok, at least more permissible).

To be completely honest, more than Zara, Nick, Isi or Devyn, I found myself absolutely loving the two new additions to the cast – a classmate named Cassidy, and the new Pixie King Astley. Astley especially. Yeah, he marks the beginning of another dreaded Love Triangle (gaah!), but I really liked him. Heck, stupid name aside (and Astley is a shockingly bad name) I prefer him to Nick! I loved the dimension of doubt and moral ambiguity that Astley brought to this book – it’s so easy to assume that ALL pixies are evil, but he humanizes them, which is disturbing for Zara (and especially for Nick). Rather than a blanket statement that pixies = evil, Ms. Jones uses this new King to question their most basic assumption. Like humans, or any other creature, Pixies have the capability to be good, bad, or occupy that murky gray area in between. And that’s really cool.

While there’s a lot to love about Captivate, I should mention that it still suffers from some not-overlookable problems. This second book departs from the phobias that characterized Need so beautifully, instead relying on a schloky “How to Survive A Pixie Attack” gimmick to introduce chapters (ex: “10. Think pixies are like Tinkerbell? You think wrong,” or “9. Pixies do not hang out with Peter Pan”). These Pixie hints felt cheesy and silly to me, and incongruous with the overall tone of the book. There’s also a lot of storming out angry emo huffiness (annoying), and the books first act plods along a tad slowly (though it heats up brilliantly by the second half). The only other big niggle for me was how much of a challenge it was to suspend disbelief in some instances – in particular, in any scene involving Zara fighting pixies. Zara as a human girl is a fast runner but not exactly coordinated, nor is she a “fighter” (her pacifist mindset pretty much prevents this). Thus, seeing her take down a few superhumanly strong, extremely vicious pixies with her physical prowess was a little hard to swallow. Also, pixies (apparently only when confronting Zara) have a tendency to monologue like bad b-movie villains. It is again, silly. If Zara is such a threat, why wouldn’t ANY pixie simply kiss her? Or kill her? Especially given her tendency to go outdoors alone and get herself into life-threatening situations?

Despite having its share of annoying scenes, however, Captivate is in fact captivating. Better than Need, and with a dramatic cliffhanger of an ending, I cannot wait for the next book in the series.

I have the emotional maturity of a two-year-old. I know this! I know, but it doesn’t make me stop trying to escape my grandmother and friends and their pity eyes and Nick’s eyes… the eyes I suddenly can’t read.
So, I run as best I can through the sloshy snow and mud. My feet take me far enough into the woods so that I don’t hear cars any more. I don’t hear anything. No wind blows through the high up branches of the spruce and pine trees. Their thin, pale brown trunks don’t creak with the weight of snow and ice. No birds sing. No squirrels chitter and squeak and make all those noises that squirrels make.

I’ve seen what happens then. Jay Dahlberg was tortured and bled and bitten when I found him in an upstairs bedroom at my father’s pixie mansion home. Jay doesn’t remember any of it. I do. I remember his body shaking as I tried to help him down the long flight of marble stairs. I remember the smell of his fear permeating everything.

Additional Thoughts: There’s a pretty sweet giveaway opportunity going on at author Carrie Jones’ website! Up for grabs are:

Make sure to enter by May 31, 2010 by filling out the online form. Five winners will be picked, so get over there for a chance at the goodies! Also, if you’re in California, Washington or Tennessee, Carrie Jones will be in town on her book tour! We’ll keep you posted with details as they are available. Finally, check out the book trailer for Captivate:

Not a huge fan of the John Mayer-pixie-dust-disney-special combo, but that’s just me! I do, however, love the covers for both books. Pretty gold eyeshadow…

Verdict: Highly enjoyable sequel, I really enjoyed Captivate. I hope Ms. Jones can keep it up and deliver a knockout with the next book in the series!