Today’s Guest: Harry Markov of the awesome/fantastic/phenomenal speculative fiction review blog Temple Library Reviews! Harry and the two of us Smugglers form an unholy trinity – we love having him over for guest blogs, reviews, etc and of COURSE had to have him here for Smugglivus.

Please give it up for Harry, folks!

Ah, it’s December. The year rolls into a retirement home on a wheelchair and it’s time to turn back to all the neatly crossed calendar boxes and wonder: “Where the heck did another year go and was I in a comma locked in a bunker to have missed it?” Yes, always the profound questions with me.

I was busy. D’oh. That much I know, but not all has been reading books and landscaping imaginary scenery for my writing. Making through 2009 on a personal level has been my biggest feat and I certainly hope that I get a break from very bad years, because 2008 wasn’t that good a year either. I did lose some sanity along the way, but found some extra pounds I was quite sure I would never see again. This reflected on my reading bit and as homemade stats show I have managed to read just above forty novels.

But I have it all covered for next year. I have actually given my TBR list to imported Swizz architects and they are constructing my very own Babylon Tower. Construction is supposed to finish never and for labor force we plan to enslave Europe. Apart from performed badly in the reading department I also had way too many hiatus posts on my blog as well as not having written as much as I could have, but I am all optimistic about this year.

The tendency as you may have noticed is for my plans to deflate, collapse and deform like a spectacular disaster movie plot line, but there were some good moments through the whole bit you know. For starters I started this improvised feature called “Reviewer Time”, where I set out to interview review bloggers and showcase the hard work they have put into their sites and its content. The idea popped up during my Blog Anniversary, which I celebrated low key, and the central idea was to show people the people behind the reviews, network, make new friends and yes, get a few thousand hits from it as well. It worked, sort of. Now I have gained more people as friends, which have made blogging way more fun. I also proved to myself that I can pull off an eight-month long feature on a regular basis.

But sentimentality aside, the year without books would have been empty and desolate and I consider myself lucky for the opportunity to read and review the following novels in 2009:

“Slights” by Kaaron Warren: This book scared me witless, kept me intrigued and induced an infinite long string of nail-biting “Oh no, no, no” moments. Staring at the screen to read has never been so tense for me before. It’s good to see Kaaron nominated for an Aurealis in best horror category. 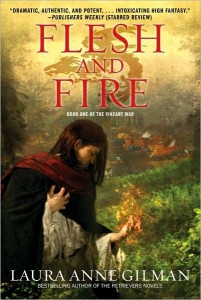 “Flesh and Fire” by Laura Anne Gilman: I am a huge wine lover. Not an expert, but hand me a bottle and I shall drink, even if it’s cheap and utter vinegar. I’m also a spell junkie, so when those two mix into an inviting world with compelling characters only good can emerge and to be frank, Gilman make me feel more like a newbie, impressionable and all, and not like the jaded reader I am. 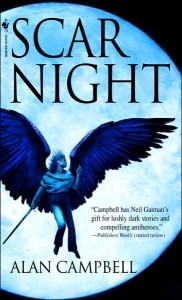 “Scar Night” by Alan Campbell: Great cover art, spectacular premise, steampunk, assassins and murders and a city hanging on chains over an abyss. What is there not to like? I know I’m cheating since this is not a 2009 release, but stuck with me as a novel I didn’t want to finish, because I would be back to the real world again.

“The Light of Burning Shadows” by Chris Evans: It’s rare for a book to completely bewitch me, install a rare sense of wonder and make me chuckle. Chris Evans has done that for me, for which I am grateful. I loved the grander battles, more magic and atmospheric scenery. 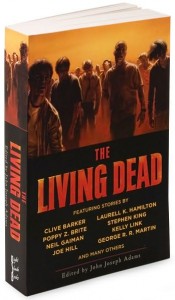 “The Living Dead” anthology: I am a huge zombie fan, so there was no way I was going to miss adding this to my top reads of the year. I am guilty of stretching this read for more than half a year, but boy did it rock my world.

I am a dreamer, so I usually find myself with bright pick glasses of positivity, when the New Year is about to debut and this year is no exception guys. What you will hear is aiming at the moon with a bow and arrow set, but as a good friend always says, “Always aim for the moon and even if you miss, you will land among the stars”.

For starters I hope to get a job by then, start revisions on that urban fantasy novel, which now is promising, and with the money I earn feed my habit. There are no particular titles I’m giddy to see released for I am giddy for all wonderful books. I also would hope to land a freelance gig, for which I am preparing as we speak. Come January I will query the big publishers again to see whether they would consider me again after having stuck on the scenery for almost two years. Fresh start and everything. I’ve enough books as it is, but I am more or less aiming for contacts rather than the free books. If all goes according to vague plans, hopes and pure luck I will also move “Temple Library Reviews” on a separate website with a professional design and looks and all everything.

But let’s move onto more grounded goals, which depend on my own organizational skills and iron will. January is going to be a themed month over at “Temple Library Reviews” and the topic is Western comic books and graphic novels. Apart from reviews, which will pop every day and cover past, ongoing and limited series I envision guest posts from reviewers, comic book enthusiasts and interviews with comic book creators, printed and online. In reality I can see a train wreck in slow motion with the causes, which lead to it, but I think I can manage it along with my exam session.

Come February “Reviewer Time” will come with a new season. Brand new review bloggers, new design, new PR approach and new ways to entice people to pay attention to the feature, because after all I need to keep my media-addicted attention whore alter ego in check. I got me a vague idea who the reviewers will be and what I want the design to look like, so I am all good for now.

I would also be relieved to find a contributor that would have a post a week ready and keep the blog running, even when I lose control over my life and the activities within I can have a constant in the equation.

Next on Smugglivus: Sarah of Alert Nerd

Smugglivus 2010 Book Review: When You Reach Me by Rebecca Stead