Today’s Guest #2: Erin Galloway, Publicist for Berkley and NAL (two of Penguin’s imprints) with a list of upcoming titles: 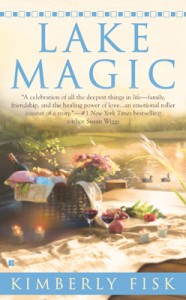 • In this heartwarming debut novel, Jenny Beckinsdale is facing the loss of her business after the death of her fiancé, Steven. She plans to convince Steven’s sexy, cynical best friend and fellow Navy pilot to help save the business…and the two lost souls may find they’re saving each other.

• The second in Shalvis’ sexy baseball romance series, follows Wade O’Riley, a bad boy whose image is about to be cleaned up by sassy publicist Samantha McNead.

• In this hot new romantic suspense Navajo journalist Katherine James and park ranger Gabriel Rossiter team up to investigate why someone wants Native Americans off sacred land and find out that their passion for the truth— and each other—makes them targets for those desperate enough to kill.

Something About You by Julie James 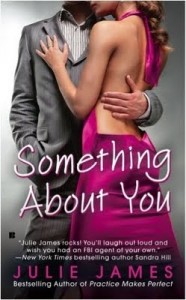 • After being jilted at the altar, librarian Faith West goes on her Italian honeymoon solo, but doesn’t stay that way for long. And though her sexy rebound man has ulterior motives, feelings surface that neither of them are prepared for.

• The next in a series of Amish-set novels in which a woman’s close- knit community helps her through challenging times.

Savor the Moment by Nora Roberts 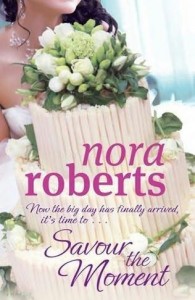 • Roberts’ Vision in White and Bed of Roses were runaway hits in 2009, both hitting #1 on the New York Times bestseller list. The third in the Bride Quartet series, which will follow the courtship of caterer Laurel McBane and lawyer Delaney Brown, is sure to be just as big a hit with readers.

Ravishing in Red by Madeline Hunter 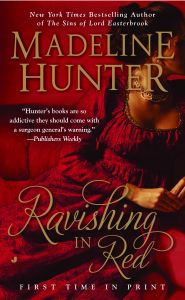 • The first in the exciting new Rarest Blooms quartet about a group of independent young women living on the fringes of London society who are about to become the talk of ton.

• In the second book in the Rarest Blooms quartet Verity Thompson must face Grayson Bridlington, the Earl of Hawkeswell. Two years ago she fled from him on their wedding night, but now when he kisses her, she doesn’t want to escape.

Mistress of Rome by Kate Quinn 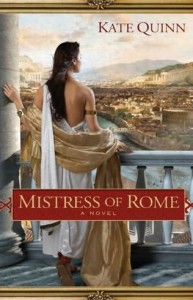 • This debut novel from a bright, new talent is not for the faint of heart. It’s a dark, gritty exploration of a concubine who must defy an empire to find love.

A Tapestry of Spells by Lynn Kurland

•The compelling start of a new fantasy romance trilogy set in the world of the Nine Kingdoms, from New York Times bestselling author Lynn Kurland 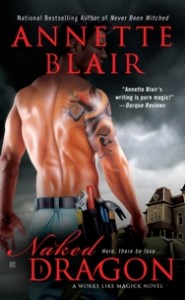 •The first in a new series about a shape shifting dragon hero finds employment using the services of a magical employment agency.

•The next installment in the Otherworld series after Demon Mistress.

• In the fifth book in the Atlantis series, Poseidon’s warriors have learned that the battle to protect humanity produces unexpected enemies—and alliances. But none more unexpected than the bond between a cursed Atlantean warrior and a woman whose sight surpasses any lie. 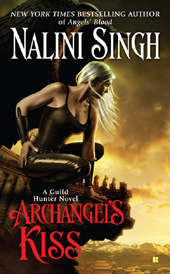 • The second in the Guild Hunter series where lethal, beautiful archangels hold sway over immortals and mortals both, with the Guild Hunters caught in between, tasked with retrieving vampires who break contracts with their angelic masters. 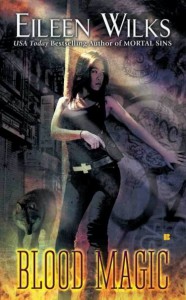 • As they plan their wedding, Lily Yu and lupus prince Rule Turner face not only the tension from their families, but a new, powerful and undying nemesis who wants to certain San Diego into a feeding ground….

•The fifth book in the nationally bestselling, hilarious series about the adventures of Glory St. Clair, an older-than-dirt female vampire with a weight problem, and Jeremiah, her on-again, off-again hunky Scottish vampire lover.

Master of Fire by Angela Knight

•Knight returns to the wildly popular Mageverse series with the story of brilliant chemist Giada Shepherd, an immortal witch charged with saving the life of Logan MacRoy, the moral son of a vampire.

• In the third book in the #1 New York Times bestselling leopard series, shifter Connor Vega carries the scent of a wild animal in its prime, and bears the soul-crushing sins of past betrayals. Isabeau Chandler’s never forgiven him—or forgotten him. The mating urge is still with her, and hotter than ever. Dangerously hot…

Line of Fire by Jo Davis

• In the fourth book in her sexy Fire Station Five series, the youngest member of the crew, Tommy Skyler gets his story.

• Western historical romance
• Anderson returns to the beginning, introducing Matthew Coulter, ancestor to the contemporary Coulter family of Anderson’s bestselling series. When Matthew spots Eden Paxton, who’s been kidnapped by a band of murderous outlaws, he will do anything to save her.

Lessons from a Scarlet Lady by Emma Wildes

•Regency-set romance
•When the Duke of Rolthven’s new wife, Brianna, reads a courtesan’s book of lessons for the boudoir and astonishes her husband with her seductive powers. Following a courtesan’s advice might lead to trouble—but will it lead to Brianna’s ultimate desire: winning her husband’s love?

•Historical non-fiction
•An intimate tour inside the royal unions from the twelfth century to the present, bringing to life the good, the bad, and the ugly particulars of marriage with the kings and queens of Europe.

The Golden Season by Connie Brockway

•Regency-set romance
•Brockway returns to Regency romance with the story of Lady Lydia Eastlake and Captain Ned Lockton, two people desperate to marry for money—neither realizing the other has none!

Promise Me Tonight by Sara Lindsey

•Regency-set romance
•Debut author Lindsey is a stunningly fresh voice whose charming historical is sure to appeal to fans of Julia Quinn. James Sheffield is determined never to fall in love, but when he discovers the girl next door is all grown up and has turned into a sensual beauty, he just might have to change his mind….

In Bed With the Duke by Christina Dodd

•Demure lady’s companion Emma Chegwidden never defies society’s rules. Until the night she runs straight into the arms of the mysterious and menacing Reaper…a man who rides the night-shadowed countryside and conceals his identity behind a mask. His goal is justice…or is it vengeance? 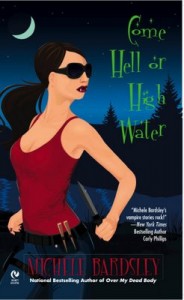 •Light paranormal romance
•Everybody in the town of Broken Heart has made mistakes. Unfortunately, vampire Phoebe Allen’s mistakes resulted in her being mated to a half-demon. Somehow her undead heart just can’t resist a demon bad boy with issues…

•In the newest book in the GhostWalker series, Mack McKinley and his team are on a mission when he comes face-to-face with the woman who stole heart. Against all odds, she’s hooking up with Mack one more time to take on an enemy that could destroy them both, or bring them back together in one hot, no-holds barred adrenaline rush.

•Steampunk romance
•When one Jack Fletcher’s nanoelectromechanical system experiments is jostled in his lab, the resulting explosion sends him into the world of his favorite novel—a seemingly Victorian-era world of steampower, aether guns, corsets, and goggles. A world where the lovely and intrepid Octavia Pye captains her airship straight into his heart…

Lover Mine by J. R. Ward

•Kick-ass paranormal romance
•This #1 New York Times bestselling author gives us what we’ve all been waiting for: John Matthew’s story. Now fully a member of the brotherhood, John Matthew must claim his heritage and find a way to save the only woman he will ever love. As with every Ward book, it promises to be filled with action, surprises, and a steamy love story.

•Dark paranormal romance
•An exciting blend of urban fantasy and paranormal, this is the third book in Butcher’s exciting Sentinel War series. Lexi Johns has learned to fear the sentinels, especially Zach, the one who’s been tracking yet. She’s determined not to tie herself to a monster, though when he kisses her he certainly doesn’t seem like one.

•Dark paranormal romance
•This is the second book in her Kyndred series, set in a world where scientific meddling has created genetically-enhanced heroes and heroines. 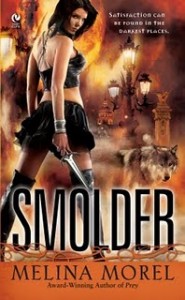 Forged of Shadows by Jessa Slade

•Urban fantasy romance
•The second book in the Marked Souls series where warriors possessed by demons must fight to save humanity in the ultimate battle between good and evil.

•Urban fantasy romance
•In the third book in The Dark Forgotten series, monster-killer Ashe Carver takes a job at the public library to prove to her daughter she can be as a good a mother as she is a hunter. Unfortunately, the lovelorn vampires haunting the library and smoking hot man who just had his soul stolen are going to make that very difficult….

Also in store for readers is a special new trilogy from Jayne Ann Krentz and her alter egos Amanda Quick and Jayne Castle. The release of Krentz’s January 2010 book Fired Up isn’t just a new Arcane Society novel, but also the first book in the new Dreamlight trilogy. What’s exciting is that second and third books in the trilogy aren’t going to be books by Jayne Ann Krentz—instead, Amanda Quick will be the author of the second book, The Burning Lamp (April 2010), and the third book will be by Jayne Castle. So to sum up, the series will have a romantic suspense, a historical, and conclude with a paranormal romance. All the books will be connected by the dangerous and coveted Burning Lamp plot element, and the overall story arc won’t be resolved until the last book. Readers are in for a treat!

Love edgy, sexy romances? Don’t miss these by some of our fantastic authors:

May
Hers for the Evening by Jasmine Haynes
Vampire Mistress by Joey W. Hill
Seducing the Highlander by Emma Wildes

July
Nauti and Wild by Lora Leigh and Jaci Burton