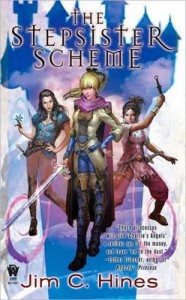 Stand alone or series: First in the Princess Novels series.

Why did I read the book: Kaz Mahoney pointed it to me when we were visiting our favourite book store (that would be Forbidden Planet) and I just had to buy it.

Summary: Cinderella–whose real name is Danielle Whiteshore (nee Danielle de Glas)–does marry Prince Armand. And if you can ignore the pigeon incident, their wedding is a dream come true.

Review: What happened after the Happily Ever After – IF there was ever one?

I love Fairytale retellings and the more different from the originals, the better and when I saw this book in the store, I knew I had to have it. But what I did not know, or what I did not expect was how much I would enjoy The Stepsister Scheme and its sequel, The Mermaid’s Madness. The cartoonish covers may indicate a cutesy (thanks to Thea for the choice of word) read but what is inside is anything but. Instead we get a somewhat dark take on known fairytales, good Fantasy writing, with strong, female characters as protagonists and yes, a good dose of humour.

The Stepsister Scheme is the first in a new series which follows a trio of fairytale princesses: Cinderella, Snow White and Sleeping Beauty. This first book is centred on Cinderella or Danielle de Glas as she settles down on her married life to Prince Armand, heir to the throne of Lorindar. It’s only been four months but the stories are already circulating about how she was a slave to her evil stepfamily and how she fell in love with the prince after sneaking into the Ball; how with the help of a magical influence (not a fairy godmother though – but actually the spirit of her mother), she got a beautiful dress and glass slippers and then one night she left one slipper behind and the besotted prince went around the reign looking for her. The rumours are mostly correct although the version that includes a magic pumpkin is a gross fabrication.

The story starts as Danielle is attacked by Charlotte, one of her stepsisters, who doesn’t seem to have gotten over the loss of Princess Charming. Crippled by her own mother (who tried to cut her foot to fit in the Glass Slipper) a resentful Charlotte tries to kill Danielle with the help of an undisclosed Magic source only to be thwarted by one of the Danielle’s servants, Talia.

Talia proves to be a good fighter, yet Charlotte escapes but not before revealing that Prince Armand has gone missing. Danielle is then confronted with the fact that her husband has been captured and that her mother-in-law, Queen Beatrice has a special force in charge of dealing with problems that can’t be solved with diplomacy and politics. Talia is one of them and to Danielle’s surprise she is the princess everybody knows as Sleeping Beauty. Snow White is the other. The three of them are entrusted with the task to go searching for Armand, a quest that eventually leads them to Fairytown (there is a diplomatic treaty prevents Queen Bea from using official channels to rescue her son) , where Danielle learns that her unborn baby is a most wanted commodity and where all three of them must face their worst nightmares.

The Stepsister Scheme is a fast-paced read ( I was done in one afternoon) and it was so much fun! Starting with the twists to the well-known fairytales: Sleeping Beauty did sleep for 100 years cursed by the fairies only to wake up in pain, giving birth to children born of rape by the grandson of a man who killed her entire family and usurped her throne; Snow White on the other hand fell in love with the hunter sent to kill her and they lived together in the woods until her mother, dressed as an old lady fed her a poisoned apple. Both women turned killers and had to escape their respective kingdoms and hide in Lorindar. Talia uses the gifts the fairies granted her to be a most skilled martial arts fighter and Snow has inherited her mother’s skills with magic Mirrors and became a sorcerer (and just wait till you learn what exactly are the seven dwarves and how they come into play in the story).

My one and only grippe with this book is how very plot centric it is – I tend to prefer character-driven stories or at least to have some character development. As this story is exclusively from Cinderella’s point of view – the one character that truly did get her happily ever after, married to a loving, passionate prince – and there isn’t a lot in the way of character’s growth (except for going from mostly passive to quite active) , I felt that there was something missing. And that something was the point of view of the characters I loved the most – Talia and Snow. We get only but a peek at how they are still suffering the consequences of their tragic pasts (Talia can’t sleep for example and hates fairies for all the “gifts” they gave her) in TheStepsister Scheme and I wished for more.

Although there are other interesting secondary characters (the Duchess is one I wish to see again) they are even less flesh-out than the three protagonists. But even if less fleshed-out than I hoped these three are strong characters and strong women. I loved how loyal and determined they all were and I revelled in the fact that Cinderella was the one to do the rescuing of her prince this time. And I absolutely adored how we find out that Talia has feelings for Snow.

Although for the most part, the book is a light read with a definite resolution of this particular story, both the repercussions of the princess’ pasts and the prospect of darkness in their future are great overreaching threads that I hope will come back in future instalments.

Bottom line is this: I finished reading The Stepsister Scheme and immediately opened the sequel, The Mermaid’s Madness.

Notable Quotes/ Parts: I have several favourite parts: from Talia and Snow’s bickering to the kiss of love (I am purposely cryptic) ; from the revelation of the villain to their adventures in fairy town (including the pixie bar) .

Additional Thoughts: I recently read another retelling of Cinderella which I loved: Ash by Malinda Lo. 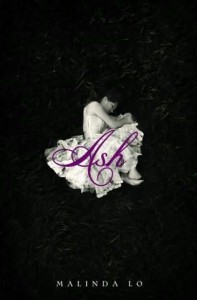 Ash is a beautiful tale of a girl who suffers of depression after the death of her father and becomes obsessed with the world of fairies; and who ultimately, actively seeks to free herself from her stepfamily and then finds happiness in the arms of another girl, the King’s Huntress.

Verdict: The Stepsister Scheme is a fun read, with great Fantasy elements and three great protagonists. If you like fairytale retellings and strong female characters, look out for this one.

Reading Next: The Mermaid’s Madness by Jim C. Hines