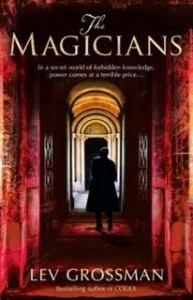 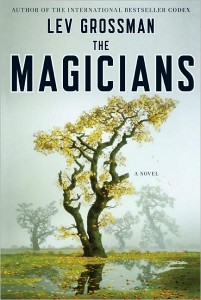 Stand Alone or series: Stand alone with rumours of a sequel

Why did I read the book: I have wanted to read the book since it first came out and after so many positive reviews. A lot of reviewers mention this as one of the best of the year.

How did I get the book: Bought it.

Summary: Quentin Coldwater is brilliant but miserable. He’s a senior in high school, and a certifiable genius, but he’s still secretly obsessed with a series of fantasy novels he read as a kid, about the adventures of five children in a magical land called Fillory. Compared to that, anything in his real life just seems gray and colorless.

Everything changes when Quentin finds himself unexpectedly admitted to a very secret, very exclusive college of magic in upstate New York, where he receives a thorough and rigorous education in the practice of modern sorcery. He also discovers all the other things people learn in college: friendship, love, sex, booze, and boredom. But something is still missing. Magic doesn’t bring Quentin the happiness and adventure he thought it would.

Then, after graduation, he and his friends make a stunning discovery: Fillory is real.

Review: I have wanted to read this book for months now. We were supposed to write a joint review and I keep sending weekly emails to Thea asking “so, when can we read The Magicians” – but other reading commitments kept us from finally getting to it. With the end of the year upon us, I felt the urgency even more so I just went ahead and read it. I kind of expected The Magicians to knock my socks off and maybe even make my top 10 of 2009.

Boy, was I wrong. Delusional. The experience of reading this book turned out to be one of the strangest experiences of my reading life. From the very first pages, I felt a mix of anger and downright revulsion towards the book and its main character Quentin; I had the weirdest, most negative reaction and the only reason I kept reading till the end was so that I could have all the information necessary to write this review.

The easiest route to summarise The Magicians is perhaps to say what a lot of reviews already said: this is what Harry Potter or Narnia would be like if their characters were on drugs , or drunk or both. But I would go further: The Magicians is like every Fantasy novel if they were stripped of any warmth, sense of wonder, heroism and replacing it all with what can be interpreted as a dose of “reality”.

Basically, the plot follows the main character, a depressed (god only knows why) guy called Quentin who is a smart, handsome, 17 year old, as he learns that there is real magic in world, just like in the books he loves. Instead of going to Princeton as he was supposed to, he is invited to attend a school of magic, ‘Brakebills College for Magical Pedagogy’ and the story follows his days at the school until he graduates, then has to go back to the real world and then to Fillory, an alternate world out of children’s books.

“Real” is very much the key word here and the fundamental theme of the book: what would happen if there was magic but not a “big bad” to fight? What if there was a hidden world of wonders, of people who had these abilities? What would be the point?

Well, obviously, people would get drunk, take drugs and have sex. Duh. Because there is NOTHING else in the entire wide world that you could possibly do. Because you see, magic is HARD.

The clear attempt of taking the Fantasy and making it less fantastic by adding an element of “reality” to it, in order to tell us that hey, “life is in shades of grey people, there is no black and white” is as trite and lacking subtlety as if the author was trying to do just the opposite. In trying, too hard in my opinion, to infuse this Fantasy with bleakness and edginess, the author removes any and all chance of me, ever connecting with his characters or with the plot.

Going even further with that, I am left wondering about certain aspects of the story. For example: in order to enter the school, all these kids, are taken from their world, without a moment’s notice, to take a test, and should they pass, they get to attend this school which is hidden from the regular world. None of them even blinks when that happens. Later down the road, they get to visit Fillory, a world which up to that point they thought was fictional but they take that in stride and are ready to jump into it and live the stories they read as children.

The assumption made is that since they all like to read Fantasy novels, this new reality comes so easily to them because they are used to the idea of Fantasy – and that to me, was so freaking insulting as a Fantasy reader, I can’t even express myself coherently. It is as though, Fantasy readers can’t tell reality from fantasy and are so immersed in their escapism that well, if ever confronted with the imaginary world, turned real, not one would ever think about it for two seconds. I am left with a very sour taste in my mouth, one that comes from feeling like I was being mocked by the author. Maybe that was not his intent. Maybe he tried to criticise the genre and I am totally missing the point. Given the universal praise this book received it might well be. I do know that it didn’t work for me.

That this book has a “message” is clear to me, though. Even more so when every single aspect of the Fantasy world is unoriginal and lifted from other Fantasy novels. The school is Harry Potter’s Hogwarts; Fillory and its mythology is Narnia down to a “t”. It is as though Lev Grossman didn’t even try to come up with a Fantasy world of his own because he was more interested in a message than in storytelling. This message is more important than everything else that some things are completely glossed over: there is a student who dies in the middle of a lesson and nothing ever comes out of it. The students are at one point transformed into geese and foxes but again, very little comes from this experience; they are completely pointless and there for shocking effect, especially their time as foxes .

The bottom line is this: I absolutely HATE to read books that try this hard to tell me something. Especially when they try to tell me that life is hard. I am alive. I KNOW that. Tell me a story in shades of grey but do so in a less blatant way, please.

Regarding the characters: Taking it a step further from the questions asked above, if a young man is unhappy in his life, what would it take to make him happy? Would living his dream do it? Would discovering that the world he thought was fictional was actually real make any difference? The answer according to The Magicians is, no.

And this is essentially IT: Quentin is a depressed guy, a guy who struggles to find a place in the world, a guy who is full of resentment but who has a sense of entitlement; who is granted his heart’s desire and still, he can’t be happy. And so page after page, we read about this guy in school, with his friends, with his girlfriend whining about how miserable he is. Even when he finds out that the world of Fillory, the world from the books he loves to read is REAL and THERE for him, still he manages to make a mess out of it. Does that make him a flawed, real character? Yes, it does. Do I want to read about him? Hell, noes. He is a total tool.

Because frankly, there is nothing I hate more than to read about a privileged kid (rich, handsome, ultra smart and powerful. Hey, Marty Sue!) constantly whining about his life.

And THIS, THIS is what made me so repulsed. Quentin is my worst nightmare coming to haunt me: he is Holden Caulfield all over again. I have no sympathy for Holden as I have no sympathy for Quentin. From the moment I realised that, The Magicians had no chance with me – this review is every bit a reflection about me as a reader and what I like or don’t like. Catcher in the Rye is one of my least favourite books ever. And The Magicians reminds me a lot of it.

I feel so strongly about Quentin that I almost wished that he was actually suffering from medical depression in which case he could be treated with anti-depressants. I almost wished that everything in this book was happening inside his head. Almost, because really, I couldn’t.Care.Less .

As for the secondary characters, I only really liked Alice, Quentin’s love interest; in fact she might be my favourite character in the book. Flawed, strong, driven Alice, she is ironically, the only one to have called Quentin on his bullshit.

The rest was only there to fill pages with required stereotypes. And I have a huge problem with Elliot, one of Quentin’s friends. You see, Elliot is gay. So then, obviously, he likes to dress up really well, loves to cook and has S/M tendencies and I find that insulting as hell. Not to mention, lazy characterisation.

Having said that: the book is completely readable; I did enjoy his writing and there were turns of phrase that I did really like. And I am happy that I stuck to it and finished the book because toward the end, there is a revelation that makes the story, at least, bearable. Just. But ultimately, and rather unfortunately, The Magicians did not live up to my expectations, and that is to put it very mildly.

He had done it. Magic was real, and he could do it.

And now that he could, my God, there was so much of it to do. The glass marble would be Quentin’s constant companion for the rest of the semester. It was the cold, pitiless glass heart of Professor March’s approach to magical pedagoy. Every lecture, every exercise, every demonstrantion was concerned with how to manipulate and transform it using magic. For the next four months Quentin was required to carry his marble everywhere. He fingered his marble under the table at dinner. It nestled in the inside pockets of his Brakebills jacket. When he showered, he tucked it in the soap dish. He took it to bed with him, and on those rare occasions when he slept he dreamed about it.

Verdict: The good writing is not enough to make me like a book that comes with such a blatant, bleak message. The Fantasy world is unoriginal and the main character is unappealing.

Book Review: If you Dare

Over at Kirkus: The Man from Primrose Lane by James Renner