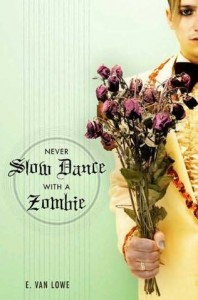 Why did I read the Book: It is a YA Zombie book. Given my love for YA books, and my new-found appreciation for the Zombie , I thought “why not”

How did I get the book: It was a gift from Graeme

Rule #1: While in the halls, walk slowly and wear a vacant expression on your face. Zombies won’t attack other zombies.

Rule #3: If a zombie should attack, do not run. Instead, throw raw steak at to him. Zombies love raw meat. This display of kindness will go a long way.

On the night of her middle school graduation, Margot Jean Johnson wrote a high school manifesto detailing her goals for what she was sure would be a most excellent high school career. She and her best friend, Sybil, would be popular and, most important, have boyfriends. Three years later, they haven’t accomplished a thing!

Then Margot and Sybil arrive at school one day to find that most of the student body has been turned into flesh-eating zombies. When kooky Principal Taft asks the girls to coexist with the zombies until the end of the semester, they realize that this is the perfect opportunity to live out their high school dreams. All they have to do is stay alive….

Review: Margot Jean Johnson is a nobody. She does not belong in any of her high school’s cliques. She is neither a cheerleader, a Goth nor a geek. She goes through life, with her best friend Sybil wishing for things she does not have, dreaming about having a boyfriend and becoming as popular as her nemesis, Amanda Culpepper as per the manifesto she wrote before starting high school. None of it has come to fruition so far and Margot feels like a failure.

Then, at the night of the school’s Carnival something happens. All the students that were in attendance – that would be everybody except for Margot and Sybil, which just goes to show how much of a nobody they both are – became zombies. Slow moving, dim-witted, flesh-eating zombies who… still attend school and go about their daily lives as before, mimicking what once was. Margot and Sybil are at first completely terrified and want to do something, to report the case to the authorities but then Principal Taff makes them an offer they can’t refuse: to hang on at least till the end of the semester (when he is set to become district supervisor) and by doing that, they basically have free reign of the school as long as they pretend they are zombies too.

All of a sudden, all of Margot’s dreams become a reality: she becomes Chairman of the Homecoming Committee, Chairman of the Prom Committee, of the Yearbook Committee, Head Cheerleader , etc, etc. All is fine, for the first time in Margot Jean Johnson’s life and by god, she will enjoy it. She embraces the new school order and so what that other kids have become zombies and don’t really know that she is miss popular now? So what if her best friend hasn’t got as many titles as she did. Hey, she can EVEN have a boyfriend and a date for the prom, if she manages to train zombie Dirk Conrad not to eat her when they are slow dancing.

But then they find out that a couple of geeks have not turned into zombies either – and that includes Baron, the guy who has a crush on Margot – and are looking for an antidote. Will Margot help or hinder their efforts?

There are two ways to look at this book and I am not sure in which camp I fall. Never Slow Dance with a Zombie is either a crap fiesta or a work of genius. It is so completely over the top that I found myself alternating between being thoroughly amused or totally detached.

The premise is quite quirky and if you accept it, I think there is fun to be had. Margot’s arc is interesting in which she goes to a very dark place throughout the story, somewhere between Denial and Crazy. It sort of reminded me of Heathers, with its brand of black comedy.

I do think that in order to fully appreciate the book, and really get into it, the reader has to accept far too much. We have to accept that not a single parent has realised that their kids has turned into a zombie. That none of the teacher’s wives or husbands have either. I understand that this can be seen as social commentary and criticism but I think it takes the idea that zombies replicate what they did when alive and extrapolates way too much. I am supposed to accept for example that Dirk’s mother has not noticed that her husband has turned into a zombie only because he is sitting in front of the TV as he always did. I GET the criticism but come on: he is green. He eats only raw meat. He does not speak. At some points, I felt like the author expected too much of me and I found out that I didn’t have it in me to give it back. Like for example, how the two geeks assumed the whole thing was a virus and tried to use DNA to create an antidote. Hummmm okay. How. Exactly?

I nearly put the book down several times but I kept going because I wanted to see the how and the why. The book picks up towards the end when the villainous villain explain The Plan and Margot has to flee the zombies around the school as song from the 80’s play in the speakers and do you see what I mean? Over the top and camp and yet, somewhat amusing. I can’t help but to digress about ideas and how they would work if they had been exercised in a different medium: I rather think that if Never Slow Dance With a Zombie were a movie with say, Amanda Bynes, or an episode of Buffy, it would actually be pretty damn cool.

Having said that, the book is framed by two letters, one that opens the book and another that closes it that may or may not point towards an unreliable narrator. I guess it rather depends on the reader, which is actually what I want to say in this review: your level of enjoyment reading this book is completely up to you and what you are willing to put up with. How is that for helpful?

“I sat alone in my room contemplating the future. The darkness lounging in my soul was happy my classmates were all zombies. It told me there was nothing anyone could do about it. We have to get on with our lives. It promised me a new life where I was no longer the girl on the sidelines passing the time, observing the good life from the outside instead of living it. I was about to become the queen bee of Salesian High.
It told me to enjoy it.”

Verdict: Totally Silly and camp but with some social commentary as any good Zombie tale ought to be. I don’t think this is a book for everybody though, as a lot of suspencion of disbelief is required. Even though I was ok with the premise (otherwise I wouldn’t have picked it up) ,there was a lot more to it that I did not like.

Rating: 4 – bad but not without some merit (I guess I do know which camp I fall into.)

Reading Next: Taste of Tenderloin by Gene O’Neil.

Book Review: Nothing by Janne Teller