A while back – last Christmas, to be exact – I got my buddy Kyle a book.

Kyle is a burgeoning reader; when I first met him, he’d just started to read the Twilight books by Stephenie Meyer (in fact, he now has my old copies of the books). And since then, he’s been on the lookout for reading recommendations, mostly of the young adult persuasion. So, after lending him a few of my favorite titles (Life As We Knew It by Susan Beth Pfeffer, Mara, Daughter of the Nile by Eloise Jarvis McGraw – which I still think he has…Kyle??) I decided a great Christmas present would be The Book Thief by Markus Zusak. It’s a young adult novel, but off the beaten path of YA paranormals. In turn Kyle offered to review the book for us here, as an honorary Smuggler – of course Ana and I were thrilled at the prospect! But, as the year carried on, we all kind of forgot about it. Then, a couple of weeks back, Kyle told me he had finished the book and LOVED it. So, naturally, we were back on.

Without further ado, ladies and gents, please give it up for Mr. Kyle Quon and his guest review of The Book Thief!! 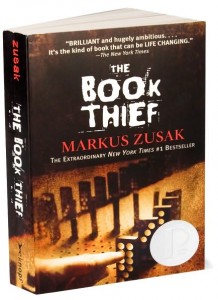 Summary: Liesel Meminger is The Book Thief; a 9 year old girl growing up in 1930’s Nazi Germany. Through her stealing of books, she helps support her family and friends, and in the process of doing so discovers the horrors and beauty of human nature.

Before I can begin even reviewing the content of the book, I need to place into perspective. The Book Thief is told from the first person narrative of Death. Yes, the Grim Reaper. I must also mention that the book has a very unorthodox style of categorization. On the very first page and throughout, there are facts, reactions, announcements and general clarification by the narrator in bold type on the page. **HERE IS A FACT: ZUSAK IS A CRAFTSMAN OF A WRITER** More than just a literary novel, this is the composition of a story- similar to how a parent tells a personal story to their child. Death as a narrator treats the reader to the story of a girl that touched his very existence, so much that an average way of telling her life would be just that: average. Perhaps the most surprising and non disturbing in the least is that our narrator has a conscience, however apathetic it may be.

Death literally takes us by the hand and drops the reader off at the beginning scene of the book; a snowy railroad track. Liesel standing by her mother who has her dead younger brother in her arms and has died from the bitter cold. The train guards bring the family back onto the train once they decide that the dead body is none of their responsibility, and force them off the train at the next stop to have the Memingers figure out what to do with the body. A small yet central theme of The Book Thief is the consequences of responsibility or lack thereof. What we eventually learn is that some of the characters in the book live and die because of what they should or should not have been doing. At the cemetery where they bury her brother’s cold and lifeless body is where The Book Thief gains her namesake. As one of the grave diggers begins to bury the body, a small black book falls out of the digger’s pocket. Haunted by the image of her dead brother, she clings for any material thing to hold onto him by and seizes her first book: The Grave Diggers Handbook.

We learn the reason for their train ride was that Liesel’s mother was on her way to placing her and her brother into a foster home. After Liesel is pulled from her mother, she is taken to a small town called Molching, an small rural town. She is taken to the home of Hans and Rosa Hubermann, a set of experienced foster parents with their own set of issues, not the least of which is that they are somewhat poor. Rosa is an abrasive, cussing, “squat” figure. Hans, a warm hearted, quiet, nurturing father. Thanks to The Book Thief, I can now swear with aplomb with words like “arschloch” (exactly what it sounds like- asshole. ) and “Saumensch” (female pig), common words out of Rosa Hubermann’s mouth. As you might imagine by their character traits, Liesel immediately takes to her father and is put to work by her stern mother, helping with washing clothes for others in the town. After Hans discovers Liesel’s treasured book, but that she does not know how to read, he begins to teach her through the use of painting (his profession) letters and the corresponding objects that start with the letter.

The Book Thief‘s world begins to evolve from a forlorn child into some realm of normalcy. She becomes friends with her neighbor Rudy Steiner; a child much as your typical kid next door. As her life develops within her home, school and circle of friends; the one thing she has for herself are books. Her father trades cigarettes for books as her christmas gift, and she begins to get better at reading- going through her books sometimes dozens of times.

When all seems to be going normally for Liesel and the Hubermanns (well, as normal as a country gearing up for war can be), an old favor is redeemed. In the first world war, Hans was selected to help his Captain write a few letters while the rest of his company went to battle- of which none returned. His best friend in the army was Erik Vandenburg, who like Hans was more into cigarettes and cards than war and guns. Erik taught Hans to play the accordion, and when he returned from war, met with Erik’s widow and his infant son, Max. Hans promises that should they ever need something, he would help to the best of his ablilty. Now as the second world war is looming, Max has grown up (a Jew) and while others are being sent to concentration camps, Max tries to flee. With nowhere to go, he asks Hans Hubermann to hide him in his basement. It is this part of the story where we learn the human faces of Nazi Germany: Max- one of sadness yet hope; and that of the Fuhrer (German for leader / Hitler)- one of hate and anger. It seems that Liesel and the Hubermanns are of the few in their town that see past simple looks and do not hate the Jews.

Rather than give away the whole book, i’d like to focus on 2 things in particular that I was particularly touched by. The first is that this unconventionally written book also has pictures. Much as I previously mentioned, this is a story. For her twelfth birthday, her parents give her a book. It is at this point in The Book Thief that Max and Liesel begin to become very close. He has nothing to give her, though he promises himself to give her something for her birthday. He rips pages out of Hitler’s Mein Kampf and paints over them to form blank pages. From these, he fashions his first gift to her- a book called The Standover Man. Essentially a story within a story, The Standover Man incorporates pictures along with a short story that Max writes for Liesel about his own life. The crux of his story is that he has always had men standing over him. First his father when he is born, then when he is growing up the children that would beat him up in the schoolyard fights. The “Standover Men” continually change to his friend who hides him in his basement from the Nazi’s, and then the most important “Standover Man” of all is actually a female; Liesel. She who stood over and watched him when he was sick and on the verge of dying after catching a severe cold. After reading this part of the story, I literally turned the pages back and reread it a few times. Zusak’s integration of drawings add another level of realism and depth to The Book Thief. This is precisely the type of imagery that make this book amazing.

As you may imagine, books are a large symbol in The Book Thief. More so than simply things that she steals, books represent a much broader ideal for Liesel Meminger and for the reader. Books are nothing except for a collection of words. It is the choice of words, the placement and formulation of words that do so many things: express feelings, remind us of the past, and explain our lives. It is words that brought Germany to arms, and eventually to its knees. Words of hate and intolerance, words that placed a race of people in the scope of another and made our narrator, Death, carry away millions of souls. Words can hurt, and conversely as we find out from The Book Thief; they have the capacity to heal and give way to hope.

I would highly recommend The Book Thief, if not for its entertaining twists; for the depth in which its ideas are presented. The Book Thief is complex in its intertwining of symbols, thoughts and messages it offers. My only caution would be that it begins fairly slowly- I had to tread through about 60 pages before I was pulled in. Also getting used to the voice and candor of Death, the narrator took some getting used to. However by the end of the story the narration spoiled me. It made me wish that all books I read had a voice, one that reasoned and revealed. There is even a discussion prompt in the back, apparently they market the book to even younger readers. Regardless of its intentions, this was a story that anyone can get something out of. The Book Thief goes past a simple “feel good reading” and illustrates the bleak and beautiful things we each are capable of.

Thank you Kyle for the wonderful, thorough review! Hopefully we’ll see more of Kyle around these parts in the future…