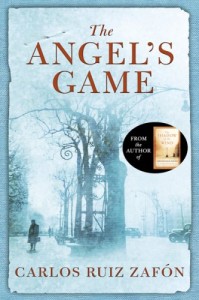 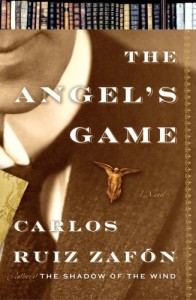 Stand Alone/ Series: Can be read as a stand alone but has connections with another book by the author: The Shadow of the Wind

Summary:In an abandoned mansion at the heart of Barcelona, a young man, David Martín, makes his living by writing sensationalist novels under a pseudonym. The survivor of a troubled childhood, he has taken refuge in the world of books, and spends his nights spinning baroque tales about the city’s underworld. But perhaps his dark imaginings are not as strange as they seem, for in a locked room deep within the house lie photographs and letters hinting at the mysterious death of the previous owner.

Like a slow poison, the history of the place seeps into his bones as he struggles with an impossible love. Close to despair, David receives a letter from a reclusive French editor, Andreas Corelli, who makes him the offer of a lifetime. He is to write a book unlike anything that has existed – a book with the power to change hearts and minds. In return, he will receive a fortune, perhaps more. But as David begins the work, he realises that there is a connection between this haunting book and the shadows that surround his home.

Why did I read the book: The Shadow of the Wind by this same author is simply one of my top 5 favorite books of all time. So yeah. I HAD to read this one which is described as a prequel (of sorts).

The Shadow of the Wind by Carlos Ruiz Zafon is one of my top 5 favourite books of all time. The book was an immense success worldwide and it was no surprise when I heard that the author was going to go back to the same world and write a prequel. I was overwhelmed with jubilation and…..fear. Could another book set in the same world live up to the Great Expectations that would inevitably be attached to it?

The Angel’s Game was released with grand fanfare in Spain and in a matter of days, became the most successful book to ever be published over there. The English translation has just been released here in the UK and in the US and the reviews so far have been extremely positive.

I finally picked up to read it last weekend and was done in a matter of hours. The start of the novel, the first few chapters were everything I could have hoped for: the beautiful, evocative writing (a tremendous translation work by Julia Graves) was there as was that atmospheric feel and gothic quality with a mystery in the works.

The protagonist David Martin, narrates his own story. From his childhood spent in poverty, with a father who was an alcoholic and an absent mother who left them both. The description of the earlier years is brief and yet, effective: the impression of a complicated relationship with the father, the lasting feeling of rejection caused by the mother and the passion for books and reading are all stepping stones to David’s psyche . The hero’s childhood has a Dickensian quality to it, a fact that is not lost to him: Great Expectations is his favorite book and to be a writer like Mr Dickens becomes David’s aspiration.

After the tragic death of his father, David is left all alone in the world until he is sort of adopted by the local newspaper. His mentor and friend, the rich Pedro Vidal is a writer himself and helps David to become a writer of penny dreadful stories. His immediate commercial success does not endear him to his colleagues and David is basically a loner. Then, he gets fired and is hired by another publisher to write gothic novels. His writing becomes his life and he is consumed by it: living to write, not writing to live. He rents an old abandoned tower house and the times go by.

All through this, his success is followed by a mysterious Paris’ publisher, Andreas Corelli who eventually, when David reaches a crossroad from which there is no return, tempts him with an offer he can’t refuse. A Faustian pact in which David has one year to write a book for Andreas. A book that will create a new religion. (yeah. seriously).

But soon enough, his entanglement with the mysterious publisher, the mystery that surrounds his own house and its previous mad owner plus his doomed love affair with a woman named Christina may prove too much for David.

It certainly proved to be too much for the book and the second part of The Angel’s Game ends up being a total and complete mess that never lives up to the excellent build-up of the first few chapters. I mentioned that initially, the writing and the plotting were really good, but even then the characterisations were a letdown. I kept hoping that there would be a moment when a balance between all elements (writing, plot, characterisation) would be achieved but it never happens.

David is not a sympathetic character. He is, for most of the book, oddly detached and there is the recurring thought that David is a spectator of his own life. From the benefactors that help him to survive and who guide and help him to offers he can’t refuse, it seems that David is never an active character of his own story. Weird, strange things happen to him all the time, and he hardly even blinks, never investigates nor does he actively seeks an answer until very late in the book.

He is also a very inconsistent character as at times he is consumed with obsessions and has a dark, brooding, stance and then the next minute he is engaging in witty banter with his assistant, Isabela.

There is a lack of feeling when it comes to David. I believe the readers are supposed to think that David LOVES reading and writing and yet…..he never is shown doing any reading and the writing he does is oddly devoid of passion. It is more like a compulsion. We are told over and over that he loves Christina (a wallpaper character if ever there was one) but the feeling never leaps from the page and quite frankly, I never understood why he loved her or as for that matter, why she loved him back.

Until that is, I found out that there was indeed a game being played – by Zafon and that the joke was on ME. That there may be a reason behind the lack of reaction from David. But when these suspicions appeared that David is not all that of a reliable narrator, it was too late and I didn’t care enough to be bothered. It was too little too late. Add that to the mess of the second half, with the growing mystery and madness and the open-for-interpretation clumsy ending with many of the mysteries of the book never addressed again, I ended up with the feeling that I was reading a beautiful yet empty package.

But it makes me wonder. It makes me think that maybe, just maybe these Great Expectations are a hard and ugly thing to live up to. I can’t help but to think that The Angel’s Game is not the book that Zafon wanted to write. I wonder if these opening words that David utters are coming directly from Zafon’s soul:

“A writer never forgets the first time he accepted a few coins or a word of praise in exchange for a story. He will never forget the sweet poison of vanity in his blood, and the belief that, if he succeeds in not letting anyone discover his lack of talent, the dream of literature will provide him with a roof over his head, a hot meal at the end of the day, and what he covets the most: his name printed on a miserable piece of paper that surely will outlive him. A writer is condemned to remember that moment, because from then on he is doomed and his soul has a price”

Maybe I am going too far when I compare the author with his own character. But given that both Zafon’s own passion for Barcelona and his passion for books are acknowledged aspects of his stories why not this as well? The fact that publishers in the book are described as almost devil-like creatures, ever present and looming over David like harpies, how much of the author is in these pages and how much of this story is his way of exorcising the pressure for a second hit?

This is even clearer to me, by the fact the story seems to be set at a time that would provide connections to Shadow of the Wind and yet it could have been set at any other time. The (loose) connection with the previous book comes from having David visiting the Cemetery of Forgotten Books and being friends with old Sempere of Sempere and Son, the bookshop that is central to that one story.

Did the book crumble under the weight of my own Great Expectations? Maybe. But The Angel’s Game to me, pales in comparison to The Shadow of the Wind simply because it lacks Larger than Life characters to deeply care for and villains to completely abhor. The beautiful writing does not save the emptiness left by the poor characterisations and the confusing plot.

Simple as that. 4 days after reading it and it is already forgotten.

An example of the beautiful writing. Vidal on love and other things:

(…) you may not fall in love, you may not be able to or you may not wish to give your whole life to anyone and, like me, you may turn forty-five one day and realise that you’re no longer young and you have never found a choir of cupids with lyres, or a bed of white roses leading towards the altar. The only revenge left for you then will be to steal from life the pleasure of firm and passionate flesh – a pleasure that evaporates faster than good intentions and is the nearest thing to heaven you will find in this stinking world, where everything decays, beginning with beauty and ending with memory.

Verdict: The first half is almost everything I hoped for: amazing writing and atmosphere and a gripping mystery even if the characters are wallpapery. Unfortunately, the second half is a wreck. In one word: disappointing.

Reading Next: Warbreaker by Brandon Sanderson