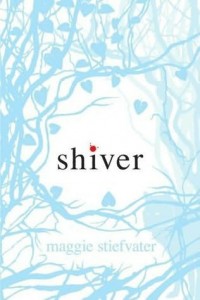 Why did I read this book: Although I wasn’t a huge fan of Ms. Stiefvater’s debut novel, Lament: The Faerie Queen’s Deception (to put it mildly), when I received an advance copy of Shiver I was eager to give the author another shot. A different setting, with different characters, and this time with a new take on werewolves…I was excited. Especially for Young Adult Appreciation Month.

Summary: (from amazon.com)
For years, Grace has watched the wolves in the woods behind her house. One yellow-eyed wolf–her wolf–is a chilling presence she can’t seem to live without. Meanwhile, Sam has lived two lives: In winter, the frozen woods, the protection of the pack, and the silent company of a fearless girl. In summer, a few precious months of being human . . . until the cold makes him shift back again.

Now, Grace meets a yellow-eyed boy whose familiarity takes her breath away. It’s her wolf. It has to be. But as winter nears, Sam must fight to stay human–or risk losing himself, and Grace, forever.

When Grace was a young girl, she was the victim of a freak wolf attack in the woods surrounding her home. She thought she was going to die, when one of the wolves, one with brilliant yellow eyes, fended the others off to protect her. Grace lived, and in the winters ever since her attack, she has always looked into the woods behind her house, always catching a glimpse of those same intense yellow eyes watching her, keeping her safe. Grace has been obsessed with the wolves ever since, always looking for her wolf. When another freak attack occurs in town, and the wolves kill a teenage boy, a hunting party is assembled to shoot the pack in the woods – and Grace is terrified for her wolf. She tries to stop the hunting party, but when she reaches her house she finds a naked, shivering teenage boy on her porch – a naked, shivering teenage boy who has been shot in the shoulder, on her porch. Grace learns that the boy, Sam, is her wolf and that he has been watching her from afar for all these years. Every year during the warm summer, Sam is his human self, but once the temperature drops, Sam turns into a wolf for the winter. And each year, Sam’s summers become shorter and shorter – soon, Sam fears he will turn into a wolf, never to be a human again. Together, Grace and Sam fight to keep him as human, no matter the cost.

So, it’s no secret that I (and Ana!) was not a fan of Lament: The Faerie Queen’s Deception. Most of my dislike stemmed from a simple but undeniably important keystone for a novel: the characters. I find myself in a similar situation with Shiver. The idea and the premise is fascinating – I love Ms. Stiefvater’s take on the mythos of the werewolf, with the gradual transformation from human to wolf forever in winter. I also cannot deny that Ms. Stiefvater’s descriptions are lovely, and her prose evocative.

But that in itself does not a good story make, and I found myself bored with Shiver. The characters never felt real to me, and the plot – what little of it there actually was – felt shabby and cobbled together.

Grace and Sam are in love. Like, CRAZY in love. Like, they’ll do anything to be together forever and ever and ever in love. Similar to Lament, however, I could not for a second believe that these characters had any reason to be so blindly, worshipfully devoted to each other. Just saying that these two characters are in love and then immediately skipping to all the tortured romance stuff does not make for a believable story. While reading I was constantly asking myself, WHY do these characters love each other so much? This felt much more like obsession to me – and it creeped me out.

*NOTE: I should mention that I loathe tortured love stories of the obsessed nature. Take Romeo and Juliet, for example (which I believe Shiver is supposed to mimic, at least in its tone of desperation). It doesn’t do much for me – which probably makes me anathema in girl romance land.*

Youthful obsession masquerading as love…it bothers me. A LOT. Especially in the context of Shiver (which is essentially Twilight. Replace sparkly stalker vampire with yellow eyed werewolf and it’s pretty much the same story. The subsequent plot differences are mere details). Yes, I get that Grace feels a kinship to her childhood savior wolfboy, and that Sam is obsessed with hottie Grace. They certainly are completely co-dependent and obsessed with each other – but this doesn’t strike me as romantic. Rather, it’s creepy. And completely unhealthy. Beyond their unyielding forever love for each other, Grace and Sam had no other defining characteristics that made them human or remotely believable as characters. Sam is – of course – gorgeous, and sensitive, and he writes romantically corny lyrics in his head all the time, and he writes a song for Grace, and he’s protective and charming and shy and modest, and most importantly he has no other purpose in life but to live for Grace. And Grace is…well, besides totally head over heels in love with Sam…*crickets chirping*…apparently, she knows how to cook. Her parents have fun and don’t really take care of themselves or Grace, so it’s up to quiet, everygirl Grace to make Quiche dinners and check that the fridge is stocked. That is the extent of Grace’s character. The secondary cast of characters is negligible and even less fleshed out than these two protagonists. Furthermore, Shiver is written with alternating chapters from Grace and Sam’s point of views. I found this an intriguing concept, and I appreciated the effort to see the thoughts of both characters – but at times it could be confusing to remember whose head I was in, as Grace and Sam tended to sound exactly the same.

While the characters are sketchy at best, there’s the problem of plotting. Shiver revolves around Grace and Sam’s burningly desperate need to KEEP SAM HUMAN OR ELSE! They spend a lot of time heating up the house and heating up the car, and making sure that Sam only ever spends a split second in the cold running from the house to the car or the car to the house. There’s some half cocked story about a jealous she-wolf that wants Sam all for herself, but that rapidly fizzles out into nothing. There’s a subplot about a new werewolf in town, but honestly, I could care less. Then, there’s the ridiculous ending/resolution of the book. Just…no.

So, unfortunately, Shiver did not work for me. From the weak characters to the poor plot and especially the ridiculous obsessed romance that gave me goosebumps from fear as opposed to delight, I couldn’t bring myself to like this book. I didn’t hate Shiver, but I certainly don’t care for it either.

I remember lying in the snow, a small red spot of warm going cold, surrounded by wolves. They were licking me, biting me, worrying at my body, pressing in. Their huddled bodies blocked what little heat the sun offered. Ice glistened on their ruffs and their breath made opaque shapes that hung in the air around us. The musky smell of their coats made me think of wet dog and burning leaves, pleasant and terrifying. Their tongues melted my skin; their careless teeth ripped at my sleeves and snagged through my hair, pushed against my collarbone, the pulse at my neck.

One wolf prodded his nose into my hand and against my cheek, casting a shadow across my face. His yellow eyes looked into mine while the other wolves jerked me this way and that.

I held on to those eyes for as long as I could. Yellow. And, up close, flecked brilliantly with every shade of gold and hazel. I didn’t want him to look away, and he didn’t. I wanted to reach out and grab a hold of his ruff, but my hands stayed curled on my chest, my arms frozen to my body.

I couldn’t remember what it felt like to be warm.

Then he was gone, and without him, the other wolves closed in, too close, suffocating. Something seemed to flutter in my chest.

There was no sun; there was no light. I was dying. I couldn’t remember what the sky looked like.

But I didn’t die. I was lost to a sea of cold, and then I was reborn into a world of warmth.

I remember this: his yellow eyes.

Additional Thoughts: Although I didn’t care much for Shiver, I absolutely love the book trailer that Maggie Stiefvater created herself (from paper cutouts and composed the music too!). Gorgeous.

And here’s the official book trailer, which isn’t bad either:

Verdict: Shiver simply wasn’t for me. The characters didn’t work and I’m uncomfortable with obsession love stories. Certainly Shiver is written well enough, and will appeal to fans of Ms. Stiefvater’s earlier work & to those of the romantic Twilight persuasion – but it’s not the book for me.

For another take on Shiver, I highly encourage all readers to give Angie’s Review (of Angieville) a try.

Rating: 5 Meh, Take it or leave it

Reading Next: Prophecy of the Sisters by Michelle Zink

Over at Kirkus: Harrison Squared by Daryl Gregory