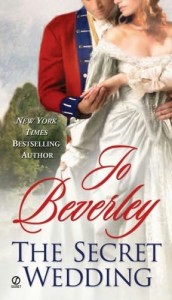 Stand Alone or Series: Book two in the Secrets trilogy. All the books in the series can be read alone but they all share the same premise: meeting of strangers at an inn and involve false names and identities. All of them have an unusual animal: book one had Coquette the papillon dog – and this one has the cat-rabbit of Hesse, Tabby. Plus, the three heroes are friends who vowed not to marry before they are 30 or else they need to pay 1000 Pounds to the most unworthy charity they can think of. So far two of them lost.

The books also have a connection with the Malloren books.

Book 1 A Lady’s Secret has been reviewed here.

Why did I read the book: I love Jo Beberley’s books. My Lady Notorious remains one of my all time favorites.

Summary:He had never intended to marry, but at the age of seventeen Christian Hill impulsively defended a maid’s honor only to be blamed for defaming it, and was coerced into marrying Dorcas Froggatt. But then he left to pursue his military career, putting the surreal event out of his mind. Until someone begins making inquiries about a man named Jack Hill—the alias he used when he wed Dorcas years before.

Christian Hill resolutely walks into an Inn in Yorkshire to stop a wrong-doing against a far too young girl. He is young himself, at 16 years old, fearless and romantic. He has just joined His Majesty Army and is about to go to war against the French in Canada. As a Knight Errant he barges into the bedroom where his fellow from the Army, Lieutenant Moore has taken the girl he eloped with, Dorcas Froggatt. Moore plans to marry her and her money and Christian is aware of his intentions. But he is too late. The girl who had agreed to the elopement has lost her virginity against her will and is down to Christian to defend her honour. He fights Moore and the man ends up dead and people from the inn burst through the door and call murder. Christian is to be taken prisoner but then the girl’s aunt – a veritable force of nature – walks in and says all would be fine if he married the girl. Christian is desperate , he doesn’t want to. He pities the scrawny, small girl but he doesn’t want to get married to a stranger. He has no choice though and has to say yes: but he gives a false name, Jack Hill. Before they know, they are married and a settlement in which he forfeits any rights to her money is signed. No-one expects the marriage to be a true one, the girl really only needs a name to save her reputation, so Christian walks away to war without looking back, being certain of only one thing: Knight Errant no more.

Christian is back in London. The war is over. He is a Major of the Army doing office work and has recently become the Viscount of Grandiston after his father earned a Earldom. Christian is a rake , who enjoys life with his good friends. He also needs to marry money – his family is not very wealthy and as the future heir, he needs to consider the future of his TWELVE siblings. You see, Christian is the product of a very rare specimen: the happy family. His parents love each other, love their kids and above all, love making the kids. They expect him to marry this moneyed widower who would be more than happy to marry a handsome viscount herself. However.

News come that someone is making enquiries about one Jack Hill. At first Christian doesn’t even think much of it, but then the penny drops and he remembers that HE is Jack Hill. He is concerned now. A few years after the wedding , when he was still in Canada he received a letter saying that Dorcas had died. He thought himself free. But what if she is still alive? Or what if someone is enquiring after him in her name – maybe a bastard son? – only because he is now a Viscount? He decides to make a trip up North to investigate, using the name of Grandiston as to not arouse suspicion. He needs to be sure he is free and if he is not, he needs to make right by Dorcas – either by divorcing her, protecting her or whatever she wants to make out of this mess. He has no idea what she looks like.

Up North, Dorcas or Caro Hill as she is known around there is alive and well. Her business is going well and she decides that she wants to marry and have children. She too, received a letter ages ago telling her that her husband had died in the war but she needs to be sure of it. Then, this Grandiston person, who has eyes like those of her husband (the only feature she can remember) shows up and she is concerned that he is Jack Hill’s heir and therefore after her money , or worse: after herself. She pretends to be a dim-witted maid and takes off to visit her lawyers. Christian thinks he should follow her. She is not amused by this and decides to take charge: she is to take control and concocts a plan. She can not let him know who she is, but she pretends to be the wife of a solicitor who had a road accident. Her name is Kat Hunter , an appropriate name for what she intends to do: to seduce the truth out of Christian. She joins him at the INN he is staying at and let the games begin.

All of this happens in the first 100 pages of the book and the hero and heroine are hardly in the same page together. As set up, this is one expertly done.

Caro, as Kat, tries to flirt with Christian, as Grandiston. Neither knows that they are married to each other and of course, the seducer becomes the seduced. Christian is a true rake and one that excels at seducing women. He doesn’t care one bit that she is married (or so he thinks), he takes what is offered, have pleasure, give pleasure and is done with it. But things take a turn to complicated when Caro is accused of stealing the rings of another woman staying at the inn and there is a mob and low and behold: Knight Errant is back. Christian saves her from the angry mob and now The Secret Wedding is a road romance AND a farce with Christian and Caro coming to know each other and falling in love, both thinking they are married to someone else.

And this is only the beginning.

I simply adore Jo Beverley’s books: she excels at setting-up and developing incredibly fun stories without ever missing out on the romance. There are fights, mysteries, false names and identities, good secondary characters (Christian’s friends Thorn and Robin and his family for example, not to mention the omnipresent, omniscient Rothgar. Aw, Rothgar . Oh, and Tabby the cat ) , all encapsulated with rich historical details such as how can a couple get divorced in Georgian times, the cat-rabbits from the South of England (don’t ask) and clothing and mannerisms from the era.

As for her characters: Christian is a true rake. The sort that feels young and enjoys it. Who loves women, laughter, freedom and adventure. Who is a good man but who doesn’t balk at shagging a stranger at an inn and one that walks away without looking back. Why not taken what is freely given? It is also the sort of rake that exactly for all his love of women and for the fact that he knows one day he must marry that he is fully prepared to become faithful. Yes, of course he wishes it would come later rather than sooner. Christian believes in happy marriages because he has seen one – that of his parents.

It is easy to believe that the saying is true when it comes to Christian: reformed rakes make the best husbands. Caro doubts it at first of course, as any self-respecting woman would especially since they know each other (REALLY know each other) for so little time. It is down to Christian to say the right words to convince her and they start with: “I’ve made lifelong friends in an hour, and enemies in less”.

Now, Caro. She longs for safety and for a tame life but all crumbles down when she meets Christian and discover passion. She is from the industrial North, a city woman used to manufacture and with a very practical vein. Someone who has a natural distrust of people from the South, especially aristocrats who throw away money in thoughtless manner. Her practical side – or her Froggatt side – tells her the future is not certain, people and circumstances change. As a woman she can be undermined and left without a penny should her husband decides to spend her hard-earned money. It is clear how , in her mind , their main source of conflict would be therefore her money and there is no dodging here: this is indeed something that comes between them , something that is serious and Jo Beverley NEVER, for a moment, let us forget this. There is no contrived away out of it and I love how Caro came up with a way to feel safe even when she lost her heart.

There are a couple of caveats. Their first sex scene happens and it’s only the after that, in a second almost- sex- scene that Caro remembers her first , unhappy, somewhat violent time, from ten years ago and is fearful. This timeline of events didn’t make sense to me: surely, if it was necessary that she had a reaction it should have come in the first sex scene. I also hoped for a conversation between Caro and Christian about that horrible day ten years ago and for more information as to how Caro recovered from that crisis but alas, there was none. I also wished for more on why Christian didn’t have a close relationship with his family even though there was love all around. Lastly, there is a secondary mystery plot that although doesn’t take too many pages , I thought was unnecessary.

There is still so much to be said about this book (and about all Jo Beverley’s books ).She writes wonderful banter for example and incredibly warm and cheerful heroes . And the tension that builds up toward the moment of revelation that they are married to each other was almost too much to bear. Plus, great believable conflict that can keep her protagonists apart, that is organic and in-tune with who her characters are. Till the end, I believed in what kept Christian and Caro apart, but fear not dear reader: it is true that for the Malloren everything possible. But you see, for the Hills everything always turn out for the best.

More to the point: always trust that The Beverley will show you a good time.

Notable Quotes/ Parts:I will not include the scene here because it’s too long but also because I don’t want to spoil but I DARE you not to laugh out loud when you read about The Rare and Vicious Hessian Fanged Rabbit. It is a delightful scene and it shows how well attuned Christian and Caro can be.

Verdict: You can always trust Jo Beverley for fun and warm love stories that are well-written and well-researched.

Reading Next: Dayhunter by Jocelynn Drake

Over at Kirkus: The Iremonger Trilogy by Edward Carey