Watchmen Weekend: Aboard The Black Freighter

As we discussed yesterday, Alan Moore & Dave Gibbons’s masterpiece Watchmen is a revolutionary work of literature. One of the most beloved aspects of the use of metafiction, the-story-within-the-story of Tales of the Black Freighter. 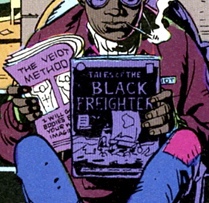 In a world where superheroes are real and public opinion has soured toward them, what would comic books be about? In Moore’s Watchmen, the subject is Pirates. Throughout the book, a young man reads a comic called Tales of the Black Freighter, with a two issue story entitled “Marooned”. A sailor has been marooned on a desert island after his ship was attacked by the titled Black Freighter. As all his shipmates wash ashore, the mariner realizes that he is not in hell, but the only man to survive the attack. He shacks together a raft made of his dead companions’ gas bloated bodies, and desperately makes for his home to warn (or avenge, if he is too late) his family about the terror of the black freighter, eating the gulls that fly close enough to his raft, surviving attacking sharks drawn to the human carrion he floats on, and consumes salt water in order to survive the journey. The mariner loses his sanity, and chooses madness only to discover he has made it home, and immediately goes on a rampage, killing two riders that stumble across his raft on the beach. When he reaches his old home — which he knows now has been commandeered by the Black Freighter pirates — he kills the first person he sees…only to discover it is his wife. Truly alone now, the mariner flees his home in shock and horror, and swims out to sea where the Black Freighter is waiting.

A truly horrific story, Tales of the Black Freighter like so many other components in Watchmen mimics and enhances the overall story in which it is inlaid. And this is just one of the many things I adore about this graphic novel.

For example, the two riders the mariner kills once he reaches the shore occurs in Chapter X of Watchmen, “Two Riders Were Approaching…” in which Rorschach and Nite Owl search to understand who was behind Doctor Manhattan’s outburst and disappearance from Earth. 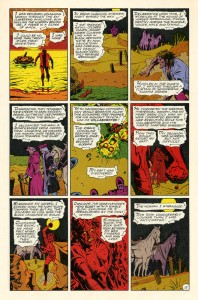 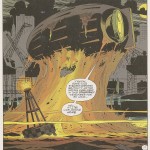 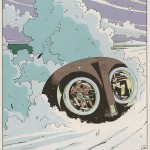 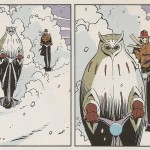 “Outside in the distance a wild cat did growl, two riders were approaching, the wind began to howl.” – All Along the Watchtower by Bob Dylan.

According to Alan Moore, Tales of the Black Freighter is reflective of Ozymandias/Adrian Veidt’s story — his horror at being the only man capable of bringing change to the world and stop chaos and destruction, his slow slide into madness by sacrificing the bodies of his men to achieve his ultimate goal. 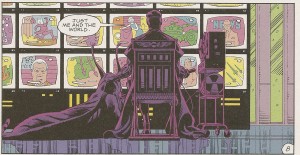 And for all of Veidt’s scheming…it doesn’t seem to matter ultimately, just as the mariner’s harrowing tale ends. 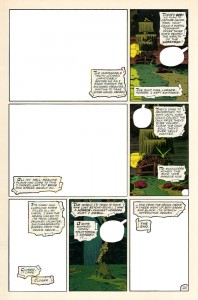 Though I’m saddened that Tales of the Black Freighter will not be featured in the film adaptation of Watchmen, that doesn’t mean Zack Snyder et al have neglected this beautiful subplot. Oh no, dear sailors! 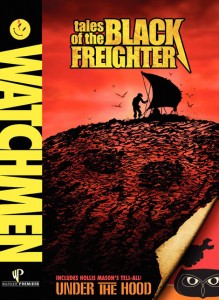 Instead of trying to truncate and cram this into an already long (3 hours long!) film, instead Tales of the Black Freighter will be released separately on DVD March 24, 2009. This animated film will be narrated by Gerard Butler (bonus, the DVD also comes with another feature Under the Hood, in which Nite Owl explains how costumed heroes came into existence). Check it out.

A longer clip and insight into Tales of the Black Freighter:

Any other Black Freighter fans in the house? Are you bummed about this comic within a comic being left out of the movie, or are you excited for the animated feature? Any other thoughts?

*Please note that all Black Freighter scans are from the incredibly hard working efforts of Boredom Festival. Major kudos to this effort to see what Tales would be liked on its own, without Watchmen art or writing in the panels.*

Book Discussion: Why We Didn’t Like Sisters Red by Jackson Pearce