That’s Our Scott and Jean

A couple of days ago we came across an intriguing question posed online — “What’s your Scott and Jean?” 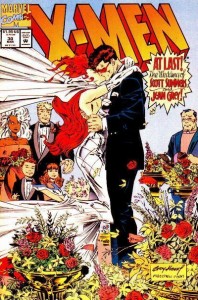 As part of a Mega-Blog Crossover Event, the crew over at Alert Nerd posed the above question to Geeks around the blogosphere. Here’s the basic rundown:

The Background: Such an awesome theme could only have been birthed on Twitter. Simply put, when someone says “that’s my Scott and Jean,” it essentially means “that’s my geek sacred cow.” It’s the issue/coupling/whatever that you pretty much can’t discuss because you are too passionate about it and it makes you too crazy. You might hear perfectly reasonable arguments against said coupling/issue/whatever, but you cannot process them. It’s like That One Thing. It could be something like “Scott Summers and Jean Grey are supposed to be together and that is just how it is.” Or maybe “the new Battlestar Galactica does not exist for me because it is not the old Battlestar Galactica.” Or “The only correct portrayals of Batman are the ones that contain X, Y, and Z.” You get the idea. It’s your nerd mental block. Throughout the day on Monday they will be updating the Master List as the entries go up – you can read what makes people crazy HERE- The Master List

Naturally, we Smugglers were foaming at the mouth when we read this scintillating description. Although we’re really not huge Scott and Jean fans (we far prefer Scott with Emma Frost to be fair, and it’s really ALL about Rogue and Gambit for the X-Men fangirls in us), we can appreciate this theme perfectly.

In fact, when we read this post, we immediately zeroed in on our shared Geek Mindblock — it is, after all, one of the things that brought us together in the first place.

So to answer this very serious question, our “Scott and Jean” is… 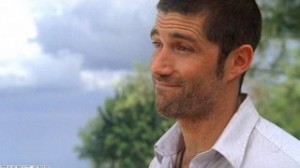 Jack Shephard. The Jacksus. The Chosen Leader. He Who Walks Among Us But Is Not One Of Us. Or, more accurately: The disgustingly hairy, snivelling, episode-hogging pansyass wunderdoktor from LOST.

You know that inky feeling of darkness, that HATE with the entirety of one’s soul for a certain something? (Thea: I have this feeling primairly for sports — especially any team from Boston, i.e. the Celtics and Patriots. And USC football. GO LAKERS! GO BRUINS!) (Ana: I ONLY have this feeling for Jack Shephard. And papayas. I freaking HATE papayas.)

Well, this is exactly how we feel about The Jacksus (Jack Shephard’s true name since, like Jesus, he is the Chosen One and can Do No Wrong). Maybe there are compelling arguments for Jack as a character or as a leader (Thea: If there are, I sure as hell haven’t seen them. *snorts* Good luck trying to make those arguments, Jack-fans) (Ana: I second that) . But honestly, NOTHING could change our opinion of him.

As we’ve mentioned many times before, we met on LOST forums, and really bonded over our shared love for Skate (that’s the Sawyer and Kate ship) — but the glue that really solidified our friendship was our shared loathing and mockage of Teh Jack. Over at our main forum haunt, we even created a Jackshrine; that is, a special subforum, dedicated solely to the Awesomeness that is Jack Shephard (Thea and Ana: *snorts*).

WARNING: If you are a Jack-fan you may want to avert your eyes NOW. Seriously, do not carry on if you love the guy. You may realise you have been living a lie all these years. You have been warned.

Perhaps we should be grateful to the Jacksus. After all, he has taught us so many things…

Things That We’ve Learned From Jack:

How People Respect and Listen To You Better If You Get Right Up In Their Face And Yell At Them:

How To Play Manly Sports By Incorporating Dance Moves:

How To Stalk People:

How To Look Sexy Even When You’ve Forgotten Your Deodorant:

How To Convince People You Are Sooo Not Creepy:

How To Wear Jewelry Effortlessly:

How To Ooze Sexy By Taking Your Shirt Off:

How To Look Seductive In Bed:

How To Make Friends Whilst Travelling:

How To Impersonate A Zombie: 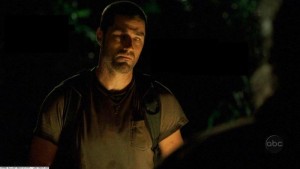 How To Effectively Negotiate For Drugs:

How To Build A Kite:

How To Come Up With Perfect Plans In Times Of Trouble:

How To Cope With A Bad Hair Day:

How To Get Women To Go On A Date With You:

How To Blend In And Not Look Like A Tourist:

How To Make Women Feel Special:

Most Important Of All, Jack Has Taught Us…

How to Cry With Dignity (for absolutely ANY reason):

This little pictorial dedication isn’t all we have for the Jacksus! We also had taken to creating little things called JackFacts to celebrate his greatnes. They’re kind of like Chuck Norris facts only obviously cooler because Jack Shephard is…Jack Shephard.

Jack Shephard challenged God to a contest to see who could gain the most followers. Jack so far has conquered the West Coast of the United States, Australia, and is now working his way through the South Pacific, one soul at a time.

Jack Shephard doesn’t rip the sleeves off of his shirts. All sleeves disintigrate when they come into contact with his deadly python arms.

Jack Shephard doesn’t cry because he’s emotional. He cries because it just hurts that bad to be Jack Shepard.

Most people think Steven Spielberg’s inspiration for Jurassic Park was careful paleontological research. What most people fail to realize is that Spielberg just took a picture of Jack Shephard’s chest, and the movie created itself.

Jack Shephard didn’t fly to Thailand. He swam from Chicago. In 4 hours.

Jack Shephard’s tears are not real. He cries just to fool everyone. His tears are manufactured at the same place where they make the Strawberry flavour for Mcdonalds milkshakes.

Jack Shephard likes toothpicks in his sandwiches because he uses them later to break into banks, steal cars, perform surgery, comb his chest hair and pleasure women.

What came first, the chicken or the egg? Neither. Jack Shephard came first, everything else came after.

If a tree fall in the forrest and no one is around does it make a sound? Yes, but only Jack can hear it.

Jack Shephard invented air. He dares you to disprove it.

The button had nothing to do with electromagnetism. It had to be pushed every 108 minutes in order to safely release the buildup of Jack’s animalistic sexiness.

Jack knows how many licks it takes to get to the center of a Toostie Pop.

Jack’s tears may or may not have caused The Flood in the Bible.

When Jack goes Directly To Jail, he DOES pass Go and he DOES collect 200 dollars.

Next time you see Jack crying, try and collect some of his tears. Pound for pound, they’re worth more than gold.

When Jack made that ‘small incision in Bens kidney sack’, he didn’t use a scalpal, he used his mind.

If Jack Shephard shouts at you, you automatically become preganant. Even if you’re male.

In season one of LOST Jack decided that things were getting a little boring so he built the islands hatches over night. With a toothpick.

Every time Jack Shephard cries, somewhere a new baby is born. Every time he screams, yet another person has developed lung cancer from second hand smoke.

Jack Shephard does not need human interaction, food or water in order to survive. This is because his chest hair is actually a miniature self-sustaining ecosystem.

Jack Shephard does not need female attention for any purpose. He can pleasure himself by stroking his mane of chest hair, and is completely capable of asexual reproduction.

You know that statue on the island of the leg with 4 toes? Jack built it using a large sandbucket, a spade and of course, a toothpick. It took him twenty minutes.

When Jack Shephard plays football, the endzone is just the beginning.

Jack Shephard’s semen is 100% antibacterial. This is the reason no one has died from infection on the island. Every night he mixes a little bit of it in the water supply.

Jack Shephard has the greased lightening reflexes of a mongoose and the feather-light touch of purest cashmere. These skills have allowed him to sleep with everyone on the island, undetected.

The mystery of Sun’s baby-daddy will be revealed when she gives birth to a 25 pound, magical talking baby gorilla. Jack Shephard will immediately decapitate his illegitimate son while crying out to the heavens, “THERE CAN BE ONLY ONE!”

Jack Shepard is powering all the electricity in the Otherville with his raw sexual magnetism. A single pelvic thrust from Jack could power the entire earth for 18 years.

Jack Shephard is the real Man from Tallahassee. He was able to father Locke, screw Sawyer’s mom, and embezzle millions of dollars. From the womb.

Jack Shephard has been the inspiration for many master works throughout the ages. It is rumored that Jack was Homer’s model for Achilles in The Illiad, the wind beneath all our wings to Bette Midler, and it is rumored that Stephen Hawking’s A Brief History of Time is loosely based on Jack’s childhood encounters.

Can you catch a shooting star? Can you tame a wild stallion? NO! Such is Jack Shepard.

A poll made recently revealed that 93% of children (boys and girls) want to become Jack Shepard when they are a grown up, dethroning astronaut and princess.

Jack Shephard took a vow of celibacy upon learning that sperm counts were 5 times higher on the island. Thus saving the island residents from the inevitable tsunami that would occur should he ever reach completion.

Had enough yet? One last gift to you, dear friends. Allow us to present you with the most precious gift of all…

The JackFace
(Play this as a drinking game the next time you watch an episode of LOST. Any time you see Jack pull a JackFace, chug a beer. Merry Christmas.)

Mostly we really just hate that out all of the wonderful, flawed, beautifuly written characters in Lost (such as Locke, Desmond, Sawyer, Sayid,etc) it is Jack Shephard that the writers shove down our throats as the real Hero of the show.

So, there you have it: our Scott and Jean. That ONE subject that makes us go batshit insane. Now you know the full extent of our geekiness and our obsessive passion for Lost.

What about YOU: what is your Scott and Jean, your Geek Sacred Cow, the geeky thing that you are most passionate about?

Disclaimer: The Jack Shrine, JackFacts and JackFaces are collective creations of our wonderful, creative friends at That Place (of which Thea and Ana are contributors). You know who you are: we love you, dudes.