Zombie Appreciation Week: A Brief History of the Zombie

Zombies in film have come a very long way since their inception in the early 1930s–from under the control of diabolical voodoo priests, to infectious shambling swarms, to talking & sentient creatures, to Olympic speed sprinters. With all the variations out there, we thought it would be a good idea to pay homage to them, thus we give you: The evolution of The Zombie. 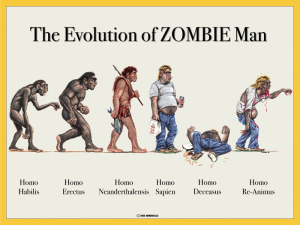 “I will knock down the Gates of the Netherworld,
I will smash the door posts, and leave the doors flat down,
And will let the dead go up to eat the living!
And the dead will outnumber the living!” – Ishtar, The Epic of Gilgamesh

Dating back to the 7th century BCE (and probably before then too), there has been this written record of the undead eaters of the living (see also the Scandinavian Draugr, the Japanese Jikininki, or the Hindu and Buddhist Rakshasa). While there is a global record of eaters of the living, the zombie proper has its origins in Haiti with…

In 1929, William B. Seabrook published The Magic Island, detailing his experiences with Haitians and their cultural belief in zombies–in fact, credit Seabrook with the popularization of the actual term “zombi”, from the West African diety “Nzambi”. Seabrook’s book then inspired the first credited zombie film, the 1932 flick titled White Zombie, starring none other than the movie monster icon himself, Bella Lugosi. This brand of zombie is almost completely unrecognizable from our current definition of the ravenous undead–Lugosi plays a Haitian Voodoo priest that controls a young woman in a nefarious scheme hatched by a jealous lover. Voodoo Zombies are almost always rooted in Haitian culture, as the tenets of “Vodou” (vodou, vaudou, vodoun or vodun) state that the dead can be reanimated by a Vodoun priest (a “bokor”). The reanimated body is completely under the power of the priest, as an unthinking slave. What’s pretty groovy about Haitian zombies is its roots in Haitian history and culture–take for example this guy, Clairvius Narcisse.

Over a family dispute concerning land, Clairvius was taken out of the picture by being sold to a bokor. In 1962, Clairvius was buried “dead”, then unearthed and resurrected as a zombie and sent to work on a sugar plantation for the next two years until his bokor master died. Clairvius would wander Haiti for the next 16 years, until coming across his long lost sister and remembering who she–and who he himself–was. Clairvius’ state of “death” and zombification is hypothesized to have been brought on by the use of two potent toxins, which bokor use to create their “undead” slaves (technically no one is dead, but the drugs supposedly prevent the zombie from thinking, feeling or doing anything outside of its master’s wishes). As it pertains to zombies in films, this whole story might sound somewhat familiar… 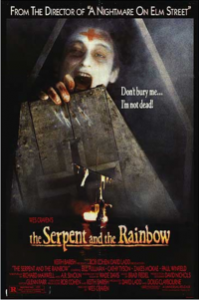 That’s because Clairvius’ story was related by Harvard Ethnobotanist Wade Davis in his doctoral dissertation, and then later popularized in Wes Craven’s film adaptation The Serpent and the Rainbow (which, by the way is one of Craven’s more underrated films–I’m a big fan. I mean, it stars Bill Pullman! Come on!).

Other notable applications of the “reanimated” sorcerer type of zombie can be seen in the works of Mary Shelley’s Frankenstein and H.P. Lovecraft, most especially in his story Herbert West–Reanimator. Later this would be made into the classic film by Stuart Gordon, Re-animator.

Zombies remained empty vessels, mindless slaves to their bokor masters in film until 1968, when a team of aspiring young filmmakers decided to bring the dead back to hungry, shambling life in the rural Pennsylvania countryside. Night of the Living Dead is probably one of the most (if not THE most) important horror movies ever made, effortlessly redefining not only the Zombie and laying the groundwork for our own interpretation of the monster today, but revolutionizing an entire genre of film. 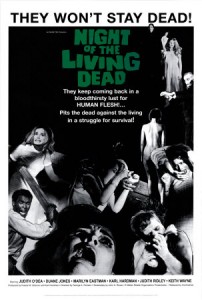 Instead of being slaves to their voodoo masters, zombies became creatures driven by a singular desire–human flesh. When a space probe explodes in Earth’s atmosphere, the dead inexplicably rise from their graves and are overcome with their only imperative of finding and devouring mankind. Being corpses, zombies stumble and move jerkily, without any known thinking patterns (yet) other than very basic instincts to feed. They cannot open doors or fire weapons, but they know where their next meal is and they swarm, surrounding a group of survivors trapped in a country home. (On an interesting trivia note–the term “zombie” is never used in Night of the Living Dead; the newscasters call the undead “ghouls”. It’s not until Dawn of the Dead that Romero actually uses the z-word)

The beauty of George A. Romero is that his films aren’t really about zombies, but are about people. As comics author Robert Kirkman writes Rick in the closing lines of his Walking Dead “The Heart’s Desire” storyarc: 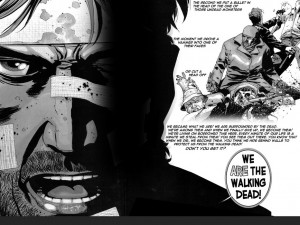 Romero’s films are layered, not just with the shock value of naked, vicious zombies munching on intestines (but who doesn’t love that!), but with messages about politics, about racism and the inherent flaws of the human condition. Just take a look at the dynamic between Cooper and Ben in Night of the Living Dead, or later in Dawn of the Dead with that ultimate scene of the raiding, looting, human mob. Or later again with the brutality of the military in Day of the Dead or the corruption and perversion of wealth and power in Land of the Dead.

On a more basic level, Romero also laid the ground rules for zombies, which are:

1. All dead people become zombies.
2. All zombies hunger only for human flesh.
3. Zombies are undead, therefore are slow and uncoordinated.
4. If one is scratched or bitten by a zombie, that person has been infected and will soon die and reanimate as a zombie.
5. To kill a zombie, you must sever or destroy the brain.

These rules of course would be tweaked, even applied further by Romero himself (see Phase IV.b).

Lesser known is that Romero had a writing partner on Night of the Living Dead–John Russo actually wrote the novel of the same name, which inspired the film. After finishing the movie together, Russo retained the rights to films with “Living Dead” in the title, and by the time the 1980s rolled around he gave the green light to Dan O’Brannon to rewrite and direct this new script…and what a difference.

This is the birth of the fast zombie, and the origin of the battle cry for the gooshy gray matter: 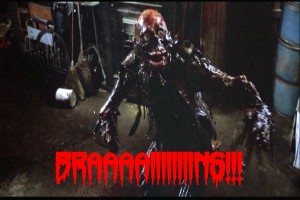 A top secret military gas called Trioxin had an accidental leak in a VA morgue, and six corpses reanimated as a result. The military quickly covered it up by freezing the corpses in sealed drums, shipping them to remote storage facilities…unfortunately, one drum spouts a leak, the corpse (tar man, above) gets out and hell is unleashed.

Unlike Romero’s zombies, there’s no way to “kill” these undead minions. Chop ’em up into tiny pieces, they’ll still wiggle around and bite. Burn the bodies and…well, we know how great that turns out. Something else new about this remarkable entry to the zombie cannon: zombies can be pretty damn funny.

One major video game franchise led to a new imagining of zombies: Resident Evil. With the popularity of these Capcom games, zombies got another face lift–this time, with zombiism as an infectious disease. While Return of the Living Dead used a government gas as the agent that inadvertently reanimated the dead, the Resident Evil games take a private monstrous entity with the Umbrella Corporation and an escaped deadly gas virus that creates zombies out of people, animals, and even some mutated undead creations courtesy of the Umbrella Corporation’s experimentation. The popularity of the games spawned the successful film franchise (well, minus that terrible second film). Also it brought along a hot, ass-kicking heroine slaying the undead left and right (although there had been heroines in zombie flicks earlier, none of them had been quite so dominant as dear Alice). 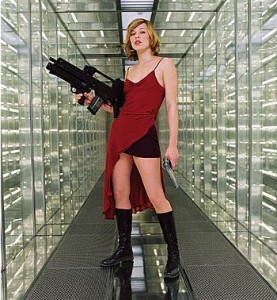 Speaking of infections, there’s also the reimagining of speedy zombies with Danny Boyle’s 28 Days Later. Technically, yeah they aren’t zombies (they are not undead), but they are infected creatures with an insatiable desire to kill and maim every living creature, spreading infection instantaneously through vomiting blood. While anyone who has been around this site for long enough knows that I’m not a huge fan of the film (its not original, as its avid supporters are convinced; it also suffers from an identity crisis as it’s not sure if it is a gore fest or a sort of pale imitation of a Romero political commentary), it is an important addition to the zombie genre if for the mere fact that it was popular and critically well received.

Other infectious plague types of almost zombies: the more recent release of I Am Legend (although they are supposed to be vampires in Matheson’s book), the fantastic Slither alien consciousness creatures, the alternate reality Fido, the Evil Dead deadites, or Grindhouse Presents: Planet Terror.

Opposed to the progression of speed or biochemical weapon enhanced zombies, there’s the more purist route. In the later Romero movies Day of the Dead and Land of the Dead, zombies start to evolve and change. They remember things from their past lives, how to play instruments, use machines, how to even think and lead an undead revolution. The two harbingers of this change? Bub the zombie, and Big Daddy. 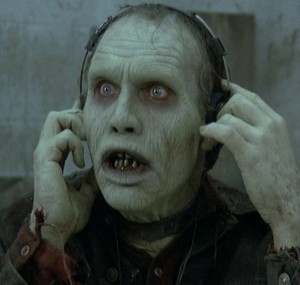 While thinking and talking zombies did occur earlier with Return of the Living Dead (“Send….more….paramedics!”), this is a more serious take on zombies. They learn, they remember things, ghosts of their prior lives. It seems like a natural extrapolation should zombies stay alive–err, undead–for long enough. More often this is taking a role in fiction too: from wonderful books like Ryan Mecum’s Zombie Haiku and Daniel Waters’ Generation Dead (both to be reviewed this week), the pretty damn good Cell by Stephen King, or even the lamentable entries of Brian Keene’s series (seriously, these books are shoddy, but it’s worth a mention).

Phase V: The Beyond…

So…what is next for zombies? Where do we go from here? Do zombies get faster? Develop superpowers? Or do they gain some of their lost humanity with remembrance of their lives? Is there a “cure” for zombiism, offsetting the zombie apocalypse? Can zombies be trained and reintegrated into society a la Fido or Shaun of the Dead? What say you?

For more on zombie books and movies (this post is by no means a comprehensive list, just a few of the films that I personally believe changed the genre), check out the older essentials post from Zombie Day during Halloween Week.

And just for fun, if you haven’t tried this site yet, you really should.

The Outbreak – Would You Survive the Zombie Apocalypse?