Last month we had Graeme from Graeme’s Fantasy Book Review over to review Neil Gaiman’s first installment to his epic Sandman series, Preludes and Nocturnes. This month we decided to pick on ask Kristen over, who runs one of the best fantasy review blogs out there with Fantasy Cafe. Since Kristen is new to the world of female protagonist centered Urban Fantasy–one of our favorite genres–we decided to start her off with one of the very best authors in the game right now: Kim Harrison. With the newest volume of her Hollows series coming out this month, what better place to start than with book one, Dead Witch Walking?

Kristen, as with Graeme before her, has been cheeky in turn, Daring us to go over to her blog and write a review for one of her favorite novels from last year, Sarah Monette’s Melusine. Make sure to stop by and say hi to us over at her spot and check out our thoughts on Melusine! 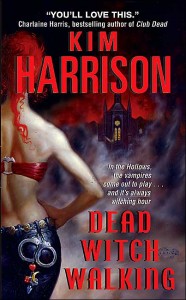 Stand alone or series: First novel in The Hollows (Rachel Morgan) series, which is soon to be 7 volumes strong!

Why did we RECOMMEND this book: The Hollows is Thea’s favorite female-protagonist centered Urban Fantasy series currently running. So, it goes without saying, when Kristen was looking for an introduction to the genre, we naturally recommended this fantastic series by Kim Harrison.

Summary: (from Amazon.com)
All the creatures of the night gather in “the Hollows” of Cincinnati, to hide, to prowl, to party … and to feed.

Vampires rule the darkness in a predator-eat-predator world rife with dangers beyond imagining — and it’s Rachel Morgan’s job to keep that world civilized.

A bounty hunter and witch with serious sex appeal and an attitude, she’ll bring ’em back alive, dead … or undead.

Ladies and gents, we give you Kristen!

Dead Witch Walking is the first book in The Hollows series by Kim Harrison. Since I have read very little urban fantasy and none of the female protagonist centered urban fantasies heavy on vampire/werewolf lore that are popular right now, this was my dare book (also because it is one of Thea’s favorite series). I have always been hesitant to read stories featuring vampires as a part of everyday life, never understanding the appeal of a pasty white guy who leeches onto someone and sucks their blood. Fortunately, although vampires were present in Dead Witch Walking, they were not the only paranormal race and they were not appallingly cheesy. In fact, this supernatural mystery was a lot of fun to read and kept me turning the pages when I should have been writing reviews or cleaning.

The novel is set in modern day Cincinnati but with a twist. After DNA was discovered genetic manipulation became widespread – as did the T4 Angel virus that infects modified tomatoes and is deadly to humans. The virus killed a large percentage of the world’s population, resulting in so few humans that their numbers were approximately equal to the Inderlanders (vampires, werewolves, pixies, witches, fairies, leprechauns, etc.) that had always lived among them. After this, these supernatural races made their presence known and lived openly with the humans, creating an alternate world – and a great fear of genetic engineering and tomatoes by humans.

Rachel Morgan, an earth witch, is a runner for Inderlander Security (I.S.), which enforces the law alongside its human-run counterpart the Federal Inderlander Bureau (F.I.B.). Rachel has come to really hate her job, which has recently gone from solving cases involving ATM thefts and the black market to apprehending college kids using charms to steal cable. Unfortunately, quitting is not an option: the last person who absolved his contract with the I.S. died under mysterious circumstances. At least, it’s not viable until Rachel captures a leprechaun wanted for tax fraud who is accused of “fabricating a rainbow for the purpose of misrepresenting the income generated from said rainbow, failure to file the appropriate requisition forms for said rainbow, failure to notify the Rainbow Authority of said rainbow’s end.” Leprechauns can grant three wishes and this leprechaun is willing to do so in return for her freedom.

Rachel agrees to this deal, thinking she can wish not to get caught for letting the leprechaun go and not to get killed by the I.S. for breaking her contract. However, her plans go awry when two of her coworkers, a vampire named Ivy and a pixy named Jenks, ask to each get one wish and join her as freelancers. She complies but only gets her first wish, figuring she’s not important enough to the I.S. for them to put a price on her head anyway. As she suspected, Rachel’s boss is not sorry to see her go but is livid when Ivy quits with her and vows to get revenge for the loss of his star runner. Now Rachel must find a way to pay off her contract – if she can survive the onslaught of assassins after her long enough to do so.

Dead Witch Walking certainly feels like the first book in a series since it seems to be establishing who the characters are, how they relate to each other, and how they came together to form a new company. Although the main storyline is wrapped up and there is a satisfying end, there is plenty of room left for sequels and many unanswered questions that make you look forward to finding out more in the next books. I look forwarding to reading more about what Trent is, if Ivy is hiding anything, and Nick’s story.

What I have read about magic so far is intriguing and I particularly liked that black magic required the sacrifice of an animal or person instead of just being a simple mixture of ingredients like the white magic practiced by Rachel. One has to be truly callous or have great motivation to engage in darker magic practices. There is also a form of magic that involves drawing upon a ley line, a source of energy. Rachel finds a ley line in the back yard of the church she and Ivy live in and it makes her nervous since her father’s death involved one and she has known people who seem to have been negatively influenced by their use. Ley lines can enhance power but Rachel is convinced that their use darkens the soul.

The book is told in first person point of view from Rachel’s perspective, which started out feeling a bit forced but got better as the book went on. Rachel is a promising character – not particularly well developed yet, but with potential considering this is only the first book in a series. She regards life highly, is smart-mouthed and tough yet capable of kindness, and willing to take big risks.

As I mentioned earlier, the vampire myth has never appealed to me, which is why I tend to stay away from these books. Although the main character is a spellcaster, the living vampire Ivy is one of the secondary characters with a strong role in the story. I did enjoy Ivy’s character, as the reliable runner who always had to have a plan – and a backup plan, to the great chagrin of the more free-spirited Rachel. It did weird me out a little when Ivy “went vampy” (as Rachel referred to her vampiric tendencies), but Ivy did fight her nature instead of giving in to the desire for blood so it did not bother me too much, especially since there was a lot more to the story than this. Also, vampire saliva contained a substance that turned the pain of their bite into pleasure, which is at least a better explanation for their appeal than simply finding someone with fangs and bloodlust alluring.

One complaint I had about this book was not the story itself but that it needed some editing. There were errors that drove me nuts, such as one page that alternated between spelling one character’s name as “Frances” and “Francis”. I also noticed that “Jinks” was sometimes written as “Jenks.” They were minor errors, but I tend to pick up on those things so it did keep jarring me out of the story.

Dead Witch Walking was very enjoyable with a fast pace, an intriguing world history, an entertaining story, and some humorous situations and dialogue. I had a lot of fun reading it and have already ordered the next three books.

———-
Thanks, Kristen for the the fabulous review and we’re stoked that you liked Rachel Morgan! (Thea’s especially stoked that you’ve already purchased the next few books in the series–trust when she says that these books only keep getting better!)

Next up on the Dare is AnimeJune from the wonderful blog Gossamer Obsessions. AnimeJune admitted that she hadn’t read much of the Science Fiction Romance genre–so of course we had to pimp one of our favorite SFR authors, Linnea Sinclair! Next month, AnimeJune will be giving us her opinion of Linnea’s Games of Command (one of Ana’s favorites). 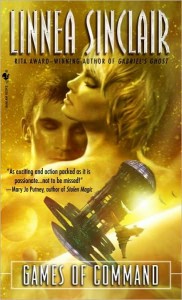 Until then, see you later folks! And make sure to stop by Kristen’s blog to see our thoughts on Melusine!