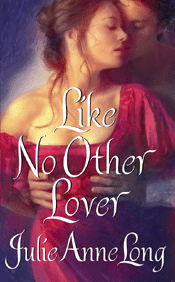 Stand Alone or Series: Book 2 in the Pennyroyal series but can be read as a stand- alone (I know I did and I had no problems)

Why did I read the book: I have seen mixed reviews of this book but then I read Stacy’s review and I just HAD to read it.

Summary: It’s the last chance for Cynthia Brightly, the ton’s most bewitching belle. Driven out of London by a secret scandal, she must find a grand husband at the Redmonds’ house party before word of her downfall spreads all over England. Unfortunately, someone at Pennyroyal Green is already privy to the whispers of broken engagements and dueling lovers: Miles Redmond, renowned explorer and—thanks to his brother’s disappearance—heir to the family’s enormous fortune.

Miles set his sights on Cynthia once, at a time when the ambitious beauty thought herself too good for a second son. But now he’s heir apparent, relishing his control. He strikes a bargain with her: he’ll keep Cynthia’s steamy secrets and help her find a husband among the guests—in exchange for a single kiss.

What could be the harm in a simple kiss? Cynthia is about to discover that it’s enough to unleash fierce passion—and that Miles Redmond is most certainly like no other lover in the world.

Once upon a time there was this man and he was all about sense and logic. Miles Redmond was his name and he was a renowned scientist and explorer, eager for knowledge and who was able to rationalize every single thing until he catches a glimpse of Cynthia Brightly, the girl that was all the rage of the Season :

She’s altogether too shiny for a woman, he decided, and began to turn away.
Which was when she tipped her face up into the light.
Everything stopped. The beat of his heart, the pump of his lungs, the march of time.
Seconds later, thankfully, it all resumed. Much more violently than previously.
And then absurd notions roman-candled in his mind.
His palms ached to cradle her face – it was a kitten’s face, broad and fair at the brow, stubborn at the chin. She had kitten’s eyes, too: large and a bit titled and surely they weren’t actually the azure of calm southern seas? Surely he, Miles Redmond, hadn’t entertained such a florid thought? Her eyebrows were wicked: fine, slanted, very dark. Her hair was probably brown, but it was a though he’d never learned the word “brown”.
Burnished. Silk. Copper.Azure.Delicate.Angel.Hallelujah. Suddenly these were the only words he knew.

and all his rationalization efforts go down the drain and for the first time he feels something he suspects is akin to love. He tries to make a move but before he reaches her, he overhears Cynthia speaking to a friend about her prospects and it is as clear as water that she knows she is a hit for all her beauty and wits and charm and she knows she can have anyone she wants and why would she settle for a second son like…Miles Redmond. Lesson learned Miles turns around and carries on with his life.

It’s one year later and their situation has changed completely. Miles’ older brother Lyon is missing and he has become the heir; their father, to whom Miles is a huge disappointment (or so it seems) wants him to marry Georgina, his childhood friend and neighbour which he agrees to – it is the right thing to do and it will also bring the money he needs to finance his next expedition. Cynthia , on the other hand, has been dumped by her fiancée, the Earl of Courtland, and scandal has chased her out of London to the country. Before it reaches her here, she needs to get a new fiancée because Cynthia may have charm and wits and beauty but she has no family and no money. And now, now she wants Miles Redmond.

But upon arriving at the house party, at his country estate, invited by Miles’s sister Violet, Cynthia learns the man is not as gullible as she had hoped him to be – after cautious and deep observation, Miles just “got” her. As soon as he can, he is very sincere and to the point: he is out of the question for her, but for a kiss (what? A kiss? “What on earth was he doing?”) he will tell her all about the other men attending the party. Of course this kiss is not merely a kiss – it never is. It opens up the door for a myriad of feelings that are not supposed to happen – they never are – and while Cynthia tries to win the affections of the other men in the party and Miles the affection of his intended fiancée, they remain continuously aware of each other as much as they don’t want to. And there is jealousy, confusion, and at first Miles can certainly come across as a judgmental prig for being somewhat disgusted by how cold Cynthia can be about her future. But Cynthia is doing nothing that he is not doing himself: marrying for money. Simple as that. Cynthia is one of those great heroines that have a sense of her own worth that instead of relying on others will try anything to do better for herself, non-apologetically. I greatly admired her even if I did not admire her actions.

Miles and Cynthia are two completely strong, self-aware and self-absorbed characters and what is good, what is really good about Like No Other Lover is this discovery of each other that ends up leading to a self-discovery of other facets of their personalities that humanised both characters not only in the eyes of the readers but in the eyes of the other characters as well – case in hand, Miles relationship with his sister’s Violet, who in the end was SURPRISED when she realises that her brother has a heart.

This, in my opinion, is one of the best types of love stories – when two already strong protagonists become stronger – because of their love for each other. Miles for example finds out that there are things he does not need and that he can face his father if he needs to. Or how they developed traits they did not had – Miles finds himself thinking in poetry while Cynthia finds herself becoming increasingly fond of insects and spiders , so dear to Miles; ,all of this happening naturally , as their love grew and as they exchanged looks and barbs all through the duration of the house party.

Her dress was a deep shining green, cut simply: a rectangle neckline and short untrimmed sleeves. It would have in fact been surprisingly severe but for the overlay of mist-fine net in which little sparks seemed to be caught. Miles was not a modiste. He couldn’t have said precisely what caused the little sparks. He could, however, say quite definitely that the effect was like watching the mist pull back from the Sussex downs in the morning in response to the first rays of the sun and oh dear God he was thinking again in poetry.

She hadn’t been born a Redmond, or any sort of aristocrat. And when she thought of how far she’d come entirely on her own, fleas came to mind: how their tiny bodies could leap astonishing distances, distances equivalent to miles beyond their size. She was merely resting between leaps, she told herself.
Why on earth did all of her metaphors suddenly include insects?

There is plenty of humour to go by in this book to make any fans of say, Julia Quinn, happy. There were a plethora of laugh- out- loud moments from whimsical situations involving Cynthia potential suitors to the sometimes fantastic dialogue but this does not mean that Like No Other Lover is devoid of emotional substance. Quite the contrary – one of the greatest strengthens of the novel lies in the balance between humour and emotion.

Not all is good though. I have one HUGE grippe with the novel. Miles is described as big, quiet, wearing glasses, he is not particularly handsome or attractive being, as he likes to think to himself, almost invisible. I would have loved for Miles to have been the male equivalent to a wallflower and defy romance conventions by being another one of those delectable virgin heroes or one with little sexual experience. But noooooooooooooo. Miles as incredible as it may sound and going almost against the writer’s description of the man himself, has this incredible, insatiable sexual appetite and is the best guarded secret of the widows of the ton (4.times.in.one.night). Of course. It would have been funny if it wasn’t incredibly boring and predictable.

Another point for consideration is how exactly did Cynthia become the talk of the ton and the fiancée of an Earl without any connections, family, chaperone or money? It boggles the mind.

At the end of the day although it has to be said that the characters themselves and the situation they were thrown in were not the most original I have read, and despite the two major grippes I just described, Like No Other Lover has this degree of excellence that makes reading it quite an unique experience. And if you have been paying any attention to this review you can guess what it is: because there is just something about Julie Anne Long’s writing that made this journey utterly captivating and I was engrossed every step of the way – Like No Other Lover was my first book by her and will most certainly not be my last.

Notable Quotes/ Parts: There are so many quote-worthy parts in the book: like for example, when Cynthia tells Miles she never had a pet or anything that belonged to her and he gives her a kitten. It is beyond a doubt one of the most adorable, cutest and romantic scenes I ever read. Then, there are all the comedic sequences like the drinking game – where a group of guests drink every time Georgina says “Mr Redmond! How very Interesting” – and they all get absurdly drunk. Or the most emotional scene of them all, when Miles and Cynthia are quietly sitting together and they quietly, silently acknowledge their love for each other by holding hands. It is so sad and beautiful. A small passage from said scene:

They sat in a little pocket of silent surprise, these two people who’d been so certain love was unnecessary when they set out to get what they wanted. How peculiar it was that this moment of realization and total happiness should be indistinguishable from anguish.

Additional Thoughts: Like No Other Lover reminded me of another book I read recently. If you are looking for a similar character to Miles look no further than to Not Quite a Lady by Loretta Chase – Darius Carsington is a scientist who studies animal’s mating behaviour and who does not believe in love, just like Miles. Of course, there comes a woman and yada yada yada, the rest, as they say, is history. And honestly, you can do no wrong by reading a Loretta Chase. 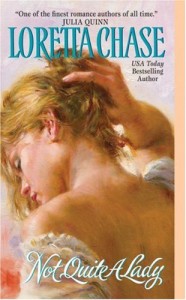 Verdict: Fabulous writing and adorable characters make up for the not-so-original plot.