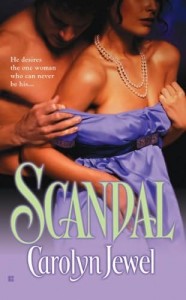 Why did I read this novel: I got one copy from Katiebabs who highly recommended it. I got another copy from my contact at the publishers. The only thing I have to say to both of them is: THANK YOU, THANK YOU SO MUCH.

Summary: The earl of Banallt is no stranger to scandal. But when he meets Sophie Evans, the young wife of a fellow libertine, even he is shocked by his reaction. This unconventional and intelligent woman proves to be far more than an amusing distraction– she threatens to drive him to distraction. Unlike the women who usually fall at Banallt’s feet, and into his bed, Sophie refuses to be seduced. And soon Banallt desires her more than ever– and for more than an illicit affair.
Years later, the widowed Sophie is free, and Banallt is determined to win the woman he still loves. Unfortunately, she doesn’t believe his declaration of love and chivalrous offer of marriage– her heart has already been broken by her scoundrel of a husband. And yet, Sophie is tempted to indulge in the torrid affair she’s always fantasized about. Caught between her logical mind and her long-denied desire, Sophie must thwart Banallt’s seduction– or risk being consumed by the one man she should avoid at all costs… .

I am at heart, a simple person. I can fully appreciate intricate and complex stories, especially when it comes to fantasy/paranormal books but with regards to romance, especially historical novels, the simpler the better. Scandal is one such book, in which a man falls madly, intensely, completely in love with a woman – over the years, no less, slowly progressing from lust to friendship to a love that shapes the man that he becomes.

And here I stand: madly, intensely, completely in love with this book – to say that if you are a romance reader and if you have a preference for historical novels with a hero to die for, you should get this book as soon as you possibly can. Now, let’s get to the review:

“The First Thing Gwilym, Earl of Banallt, Noticed when he rounded the drive was Sophie perched on the ledge of a low fountain. Surely, he thought, some other explanation existed for the hard, slow thud of his heart against his ribs. After all, he hadn’t seen her in well over a year, and they had not parted on the best of terms. He ought to be over her by now. And yet the jolt of seeing her again shot straight through to his soul.
He was dismayed beyond words”

Thus, Carolyn Jewel opens her novel: this sentence is the very first of the book. This is how we are introduced to the Earl of Banallt with the first chapter being from his point of view as he walks back into the life of Sophie Evans, the woman he loves and has loved for years.

This first chapter encompasses everything we need to know about their story: that they met a number of times over the years, that they both used to be married and are now both widowed, that Sophie was married to a no-gooder of a husband, Tommy Evans who spent his time whoring and gambling while she wasted away in the country and when he died he left her destitute and that now she lives with her brother John; that the Earl of Banallt was his closest chap and the man Tommy aspired to be and that somehow Sophie and Banallt became friends until something happened that made him go to Paris. Now , he is back to ask her to marry him. To which she says no: she can never., ever trust Banallt. Her heart has been broken by her scoundrel of a husband and she, quite understandably, cannot allow that to happen again, because we are talking about real misery and unhappiness here.

And this is basically the conflict in Scandal: at one side, the Earl of Banallt who, we the readers KNOW from the get go is a reformed rake, who adores Sophie and wants to marry her and is prepared to keep his vows this time, trying to convince her that he is changed. And then, Sophie who has absolutely no way of believing this, given his past, her past and the scandals that surround both of them.

But there is so much more. There are so many things that are so GOOD about this book, I don’t even know where to begin. The mere fact that it opens with an already reformed rake – and reformed rake stories are admittedly my favourite romance trope – gives me the warm fuzzies from page one. I am reading the first page and I KNOW.

Then, the format itself hits all the right notes, as the writer alternates between the present with Banallt’s attempts at wooing Sophie and Sophie’s other prospective suitors (yes, there are others on the run, as there are other on the run for Banallt as well – not that he wants it) and the past with their encounters over the years .We learn what happened between them, and we have a measure of Banallt’s past as a rake, a walking scandal who had more lovers than he could count and who cared nothing for his wedding vows even though he loved his wife and his daughter. A man who one day accompanied his friend Tommy to his country home and met his wife Sophie and became intrigued with her against all odds – she is nothing like his expectations or anything like the women he has ever liked. He at first, wants her because he simply desires her. Then because he admires her and then because he loves her. They become friends as he continues to visit – he keeps on trying to become her lover but she never gives in – Sophie truly loves her husband, even if part of her wonders about Banallt (and who wouldn’t, really) . Until tragedy strikes, Banallt does something hurtful and they are apart until they are free (not for very long though and nothing in the book proper, thank very much).

And this is another thing of note: the author does not shy away from true tragedy. People hit rock bottom so that they can emerge from ashes. From them main characters to the secondary ones. There is even the required secondary love story but when I thought the author was going in one direction she did something that left me awestruck and completely surprised. Kudos to Carolyn Jewel for having guts.

Then there is a historical context that plays an important role in the novel: Napoleon has escaped Elba and is going to Paris and all the men including Banallt are worried about the events to come and what would happen. I admired the way the author incorporated this important event to the happenings of the book all around and to the resolution of the novel in particular – it added verisimilitude and a realistically tone to the proceedings.

But if you want a sprinkle of fairy tale, you will also find it: what about the fact that Sophie has dreamt since she was little about the Earl of Banallt and his castle (who was near her childhood property) and that he was her knight in shining armour. She then fell in love with Tommy Evans , eloped with him and then one day, the Earl of Banallt walks into her life. Spooky. Plus, Sophie has always had a creative mind, and because of that she was able to write sensation novels which were what kept her and her husband afloat when he was spending money right and left in London. It was her secret and one she shared only with Banallt, who destiny has it, was already a fan before meeting her.

What I like the most about reformed rake stories is that generally speaking a rake is a man that has everything: power, money, women, a title, beauty, freedom, living the high life. Then there comes one woman and he is suddenly, completely power-less. His happiness hangs in the balance of one word: yes.

In Scandal, Sophie is left destitute twice (I will not elaborate on that, as it contains more spoilers that I should give) hence being completely powerless when it came to her life, her means of bare survival. So, even though at times I may have been impatient with her for her inability to see past her prejudice again Banallt , I also understood that the ONLY power and the ONLY control that she did have was of her own heart – and having Banallt’s heart twisted even more by protecting herself.

In the end, Sophie needs to relinquish this control, and realise that this power she has struggled to maintain over her own feelings is keeping herself prisoner of the past. And by doing so, she has much more to gain than to lose. And when she does so…..it is beautiful.

Notable Quotes/ Parts: A quote from the first chapter – a taste of Banallt’s thoughts:

“She was still dainty. Still slender. Still with eyes that made a man think of nothing but looking into them a moment longer . Still wary and reserved. He knew her as he had never come to know any other woman. He knew she longed for love and that her life up to now had not been one to make her think she would ever have it. He still wanted to take her into his his arms and swear she would never want for anything again. “

Verdict: I am in love with this book. Simple as that.

I have one copy of Scandal to giveaway – I like it so much, I need to spread the love. The contest is open to everyone and will run until Sunday February 8th at Noon (PST). To enter, simply leave a comment saying who is your favourite reformed rake? (mine is easy: Sebastian St Vincent from Devil in Winter by Lisa Kleypas. )