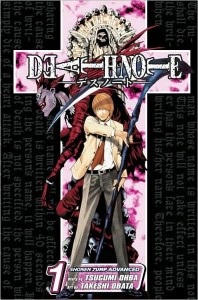 Summary: (from Amazon.com)
Light Yagami is an ace student with great prospects – and bored out of his mind! But all that changes when he finds the Death Note, and notebook dropped by a rougue shinigami death god. Any human whose name is written in the notebook dies, and now Light has vowed to use the power of the Death Note to rid the world of evil. But when criminals begin dropping dead, the authorities send the legendary detective L to track down the killer. With L hot on his heels, will Light lose sight of his noble goal… or his life?

Why did I read this book: It was a complete impulse buy while waiting in a very long line at my local Borders. I saw the manga on the table next to me, thought the premise looked pretty cool, and I hadn’t tried any manga so…what the heck!

Light Yagami is a brilliant young high school student who appears very serious and focused on his studies, getting ready to take his college entry exams (after already pretesting as the highest score in Japan). The only problem is that Light is completely, utterly bored. That is, until one day a mysterious notebook falls into his path. Emblazoned on the front of the book are the words “Death Note”. Intrigued, Light picks up the notebook and studies it in the privacy of his room, opening it to find some very rudimentary instructions:

How to use it
I

At first, Light thinks the notebook is a joke–would someone really die if he writes their name in the book? Once he begins experimenting, however, Light discovers that the Death Note is the real deal. With so much power at his fingertips, the very intelligent Light decides that he wants to recreate the world in his image, as a god that will preside over a new-found utopia–and he begins to systematically kill the unjust, prisoners and criminals whose names and crimes he has seen on the news and researched online. Each criminal Light targets dies 40 seconds later of a heart attack.

As it turns out, the Death Note is a tool of the shinigami, or literally translated “death god”. Each shinigami has a Death Note, in which they write the names of humans who will die. Occasionally, a shinigami will lose his Death Note, or allow it to be picked up by a human. Such is the case with Ryuk, the shinigami that owns the Death Note that Light has found. As Light soon learns, those who touch the Death Note can see its shinigami owner though no one else can–and Ryuk and Light become strange acquaintances as Light provides Ryuk with incredible entertainment. As Ryuk says to Light, “Humans are…a RIOT!”

Soon, the rash of mysterious deaths catches the eye of the International Police Organization (Interpol), who believe all the criminal deaths are related–and dub the murderer “Kira” (the Japanese katakana letters ?? and pronunciation of “Killer”). Interpol pulls its Ace-in-the-hole by setting their top agent, the mysterious, faceless and nameless man known only as “L”, on the case. Though Light’s murders are the ultimate untraceable crime, he is soon locked in a battle of wits, with L closing in on his trail, while Ryuk observes these interesting human behaviors with his shinigami eyes.

Death Note is a trip. It is at once a horror story and a black comedy, and also a police thriller/suspense book with supernatural elements. What would a human of above average intelligence do with the key to limitless destructive power? In Light’s case, he decides to remake the world according to how best he sees fit. It’s very Ozymandias of The Watchmen, punishing the unjust and sacrificing the few for the good of mankind. Of course, the problem inherent with such thinking remains the same: who should be entrusted with such power? Who watches those who make the decisions who should live and who should die? Light’s predicament is not a groundbreaking new plot device, but the many stipulations of the Death Note makes for an interesting twist on this theme of absolute power. The moral questions the Death Note raises are also interesting, if a bit simplistic.

What I loved most about Death Note was in how damn likable Light was. He is, by definition, an anti-hero. His actions result in the cold blooded murder of hundreds of men (criminals or no, it is still murder), and at some points in the novel he considers the possibility that should any of his family members find the Death Note, he would be forced to kill them as well. Despite this icy-seeming demeanor, as the narrative follows Light and his schemes for utopia, I couldn’t help but admire his intricate plans and traps. With L on his heels, Light expertly plays Interpol, the FBI, and local Japanese authorities against each other, thwarting L’s attempts to unmask Kira at every turn. It’s all very thrilling and psychological, a Criminal Mastermind versus Detective Genius in a Moriarty-Holmes, Joker-Batman sort of way…that is, if you were actually rooting for Moriarty or the Joker (Hmm, perhaps a The Devil’s Rejects, or an Ocean’s Eleven comparison is more apt). Light is determined and of course intelligent, but he has both the good looks and the charm to draw classmates to him (he also happens to be the class stud)–and similarly, he draws in the reader with his enthusiasm and zeal to beat the system. At least, he won me over. In many ways he is like Alan Moore’s Ozymandias–charismatic and ingenious, with a plan to make the world a better place at any cost. Even his name, “Light”, embodies the Adrian Veidt persona perfectly–believing themselves to be the shining beacons of hope for Mankind…as misleading as that classification may be. 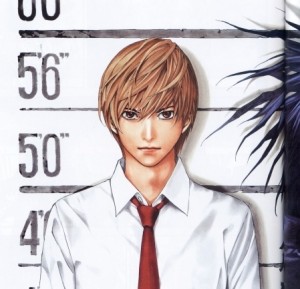 The other character the reader gets to know intimately is Ryuk, the shinigami owner of Light’s Death Note. Ryuk is a vision with his glassy eyes, his punk rock hair, tight leather, and dark lips pulled back from razor sharp teeth. Ryuk’s predicament is simple–as a shinigami, he and the others of his kind take life from humans and in turn live forever (sort of), and because of their godlike status, they have grown bored and complacent. Ryuk is seen as an outsider by his fellow death gods because he wants to spend his time on Earth with humans. He’s a mischievous character, revealing unwritten rules to Light late in the game, and clearly on neither L nor Light’s side (though he does find Light very entertaining). Ryuk also is hilarious in a darkly comedic sort of way. He follows Light around like a demonic shadow, and he looks terrifying–there are a number of closeups on Ryuk’s very offsetting face–but his reaction’s to Light’s ingenious schemes, and in particular in one memorable last page of the manga, make him a dangerous, yet funny sidekick (although there is no doubt in my mind that at some point in the future, Ryuk will be Light’s undoing). The interactions between Light and Ryuk, with Light not even batting an eyelash to the nightmarish figure and Ryuk’s growing amusement to the whole situation, are priceless. 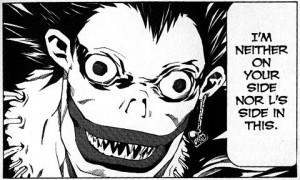 The only quibble I have with Death Note lies in some of the translation. Some of the humor and the phrases are very direct and literal translations from the Japanese, and while I didn’t have a problem with it (I read and speak a little), it might strike some as strange. Other than this negligible nitpick, what’s not to love? The art is wonderfully clean in the traditional black and white manga style. The plot is engaging and delightful in its absurdity, and I love the black comedy that fills the pages of Death Note. The question now is, how do I finance purchasing the next twelve volumes of the manga without breaking the bank?

Notable Quotes/Parts: I loved the final page of this volume, from an additional strip, originally published in Weekly Shonen Jump Volume 4-5 in 2005…

Light: Merry Christmas, Ryukie.
Ryuk: Ryukie…?
Light: So Ryukie, what do you want for your Christmas present?
Ryuk: Hmm? Can I have anything I want? The thing I want most right now…is…you know.
Light: [to himself] My…soul?
Ryuk: The Game Boy Advance SP. The Silver version.
Light: [falls over]
Ryuk: ADVANCE SP, ADVANCE SP, I WANT MY SILVER ADVANCE SP

Additional Thoughts: Death Note‘s success as a hit manga series has led to adaptations across numerous media. In 2006, an anime version aired in Japan, comprised of 37 twenty-minute episodes, now available in the USA–amazon link here. Then, two live action Death Note films were released in 2006 (with a 2008 spinoff film also available)–these films are available in English dvd here (bonus, the kid that plays Light is noneother than the kid that played Shuya in Battle Royale!). 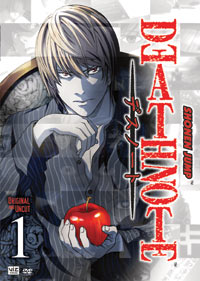 The icing on the cake? Hollywood is in the process of creating an American remake of Death Note! This could be a good or bad thing…considering many J-horror/Asian Horror remakes are flat out shit–see The Eye, Shutter, or The Grudge 2. (Although on the flip side, one could look at the excellent remakes of The Ring and the pretty decent Dark Water for good examples of J-horror brought to American cinema).

In any case, I’m excited to get my hands on the anime and Japanese live action dvds! Here’s the first part of the first anime episode:

Verdict: Death Note is an engrossing, deliciously fun dark horror comedy, and one I could not put down. I eagerly await continuing in the adventures of Light and Ryuk in the remaining manga! Definitely recommended for those who don’t mind a bit of morbidity with their humor.

Reading Next: Goth by Otsuichi