Book Review: At The Bride Hunt Ball by Olivia Parker

Title: At The Bride Hunt Ball 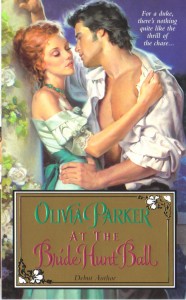 To Gabriel Devine, Duke of Wolverest, the bonds of marriage are nothing more than shackles. But if he’s to remain a lifelong bachelor, that leaves only his younger brother to carry on the family name. Inviting the ton’s most eligible ladies to an elegant ball, Gabriel is certain any one of them would be all too eager to become the next duchess and provide an heir—leaving Gabriel to continue his ecstatic pursuit of pleasure.

Her social-climbing stepmother would give anything to have Madelyn Haywood betrothed to a future duke. But Madelyn believes the brothers Devine to be nothing more than heartless rogues—especially Gabriel, whose rakish reputation precedes him. He is nothing more than a slave to passion, and she will not be conquered by his caresses­—and yet his wicked ways tempt her so . . .

Why Did I Read The Book: I bought it a few months ago when Julia Quinn recommended it. I read it now, because I am trying to make a dent on my TBR pile!

The brooding, collected, perfectionist Gabriel Devine, Duke of Wolverest is searching for the perfect wife. For his brother. Gabriel, plagued with memories of his unhappy mother whose marriage to his father was a failure, decides, as a principled guy, he shall never marry so that the he won’t subject his wife to his impossible perfectionism and make her miserable. But being a Duke and all, he needs to think of heirs and the such and decides his younger brother should be the one getting married – never mind that the brother in question, Tristan is his name , is a self-centred womaniser who would rather be doing rakish things than getting a bride. Gabriel aided by their sister Rosalind concocts a plan to help Tristan choosing – cue to the most atrocious premise ever:

The groom to be – Lord Tristan. Young, handsome, rich, full of life and experienced.

7 girls chosen amongst the best of the Ton – pretty and well- connected, invited to attend a 2 week house party at the family estate, all accompanied by their proper chaperones. There is to be an interview, tasks that the invitees must excel at (playing the pianoforte, or singing, or dancing), dates with the groom-to-be until at the end of the two weeks at the Bride Hunt Ball, Tristan will pick the bride by, yes you guessed right, giving her a bouquet of roses. 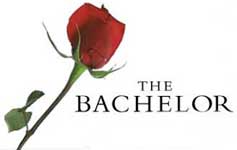 But something is just not right with this whole scenario. For at least two of the contenders do not fill the bill – there is one Miss Charlotte Greene who is a wallflower and our very own heroine Miss Madelyn Haywood who is plain, clumsy, accident-prone and *gasps* half-American. According to the rules of the game, Madelyn who is NOT Duchess material, should not have been invited but if she wasn’t there wouldn’t be a book would it? In any case, agreeing with yours truly is Madelyn herself who, upon realising she is about to be officially invited for the “hunt”, tries to avoid the man who is bringing her the invitation by running into the garden , a feat that is witnessed by the Duke, who decides to deliver the invitation himself.

Caught in the trap and with her eeeevil stepmother bent on having a duchess in the family (for the evvvvil stepmother wants Madelyn to seduce the Duke and not the brother) she has no other choice but to go to the party; where inexorably she will fall in love with the brooding duke who in turn will fall in love the clumsy – plain – imperfect heroine who is the only one that can make him laugh.

There are many reasons why this book, in principle, should not work. For starters, there is the silly premise. Then, there is the fact that there isn’t a gram of originality about the characters themselves: the brooding hero that makes the plain heroine feel pretty, the clumsy heroine that makes the cold hero feel alive, the evil stepmother, the secondary character that conspires to bring the main couple together, a misunderstanding, the ever present Virgin-Orgasm. Yes, indeed it is staple fare stocked filled with genre conventions.

And yet. There I was, enjoying myself immensely. Once I decided to embrace the campiness of the Bachelor premise, it was just easy to go along with the flow. I laughed a lot, I loved every time when the Duke got Jealous and/ or possessive (alas, two of my favourite tropes of romance) and some scenes were truly endearing and the writing was pretty good.

The characters as well, even though pretty conventional, had particular traits that made them unique. Madelyn had the required low self esteem (infused by her dreadful stepmother) but she was capable of laughing at her herself and her accidents. When she is bitten by a bee in the butt and falls into the lake in front of everybody and instead of being all woe- is- me she bursts into laughter – because of course, this would happen to her. As a very clumsy person myself, it was very easy to sympathise with Madelyn, at least on that front.
Similarly, the serious Gabriel behaves like a blabbering fool sometimes:

“You look…” Ravishing, adorable, voluptuous, tempting. “….good in blue” Good in blue? What the bloody hell was wrong with him? “The shade…it is my favourite”, he said feeling utterly silly for the first time in his entire life. “I’ve something in my possession the exact same color”.

I also liked that Gabriel never did any pursuing for he really wanted to keep his distance. Instead there were accidents with Madelyn at the heart of it – getting lost in the castle (twice), getting out a locked bedroom through the window all of which invariably landed her into his arms and which served to show him how different she was. Yes, it was probably all too convenient and contrived but as with everything in the book , I simply did not mind.

Even when there is a misunderstanding – a Little one, not a Big one – and Gabriel thinks the worst of Madelyn , she works it out that he came to the wrong conclusion based on something he overheard and she clears things out. Although near the end there is a brand new conflict and until there resolution , it drags the last pages into boring territory.

For a Debut author who uses conventional tropes, I didn’t think At The Bride Hunt Ball was that bad, not at all: quite the contrary, it showed me that this writer has a lot of potential and I will certainly read her second book, when it comes out. In any case, At the Bride Hunt Ball is a silly, light , funny book – sometimes that is exactly what one needs.

Notable Quotes/ Parts:The Ballroom scene – when she is walking around the estate and she finds the ballroom and it is empty. She is taken by the grandeur of it and starts waltzing by herself, without realising Gabriel is observing. He then walks in and asks her to dance but she says no – she is far too clumsily to dance with someone as her past record of stomping on her partners’ toes prove. He says that it is all bollocks and convince her to try and she learns she CAN dance with Gabriel who hums a waltz until silence creeps in as they fall into rhythm. It is a very romantic scene specially when later Gabriel’s sister tells Madelyn that he NEVER dances.

Additional Thoughts: This was one of the hardest reviews for me to write. I spent days thinking about it and I still am unsure about the rate.

Lately in the internets there have been conversations and discussions about the objectivity (or not) when writing a review (KristieJ wrote one just last week at Access Romance) and whether a review is merely an opinion (see Jessica’s post here).

I think it is actually a balance between the two and this fact was never as clear to me as when I was writing this review. The objective reviewer/reader (really, is there a difference? for you to be a reviewer you have to be a reader first, no?) in me, will take into consideration things such as writing, premise, character and plot arcs. The subjective will tell you how these things affected me .

In this particular case, the Objective!Ana! will say At The Bride Hung Ball is stocked full of romance conventions, tropes with character and plot arcs that have been written one thousand times before. Subjective!Ana! will say that even though her brains are sending her all of the warning signals, she still very much enjoyed the book – at least part of it.

I believe that there are also other circumstances that matter when reviewing and that influence both Objectivity and Subjectivity. Again, in this particular case it just so happens that the romance tropes here are some of my favourites: I am not tired, nor do I think I will ever tire of the Brooding Hero that has his heart melted by the Plain Heroine. Simple as that.

Does that make any sense to you?

Verdict: For a debut stock filled with genre tropes this is not as bad as one would expect. I will definitely read more by this author.

Reading Next: Kiss of a Demon King by Kresley Cole