It is Adios to week 1 and hola to week 2 in our Countdown to Smugglivus. This is this week line up:

Monday – Melissa Marr: writer of YA novels. Melissa won a Rita this year for her first novel Wicked Lovely. Her second novel, Ink Exchange is every bit as good as the first one and she will be talking about her own favourites of 2008.

Tuesday – Nalini Singh: writer of Paranormal Romance. Nalini will be talking about her favourite reads of 2008 and a bit about her upcoming books, including a brand new UF series. She will be graciously offering two books : the anthologies The Magical Christmas Cat and An Enchanted Season to two lucky winners.

Wednesday – John Marco: writer of Fantasy books. John Marco has a new book coming out in 2009 and we will be reviewing it so we thought we should invite him for Smugglivus – and he said yes!

Thursday – Mike Stone: writer of Horror novels. His debut collection Fourtold came out in 2008. He will be talking about the books he read in 2008 but not only that. Mike is co-editing an anthology of crime stories inspired by Irish legends and he will be running a competition with a fantastic giveaway – all you have to do is enter a comment on his post with a suggested title for the upcoming book! More details to follow.

Friday – Angie Fox: writer of Paranormal romance. Her first book, The Accidental Demon Slayer came out this year and is a NY Times bestseller and the second is set to be released in 2009. Angie will be offering an amazing goodies bag: The Biker Witch Holiday Party Kit: Everything the modern Harley riding geriatric biker witch needs to celebrate the holidays! Stay tuned!

And on Saturday we will have yet another Flash Giveaway! (You can still enter this weekend’s giveaway: it is open till Midday East. ) 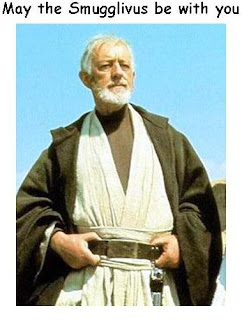 Smugglivus 2014 Guest Blogger: Renay of Lady Business and a One Piece Primer