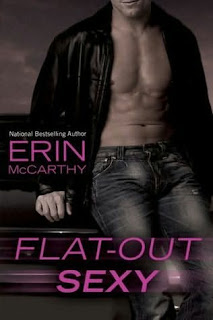 Stand Alone/ Series: It can be read as a stand-alone but I am thinking this is going to the first in a series given the sheer amount of single-hot-funny secondary characters.

Summary: Independent single mother Tamara Briggs wanted to find a new, sexy, no-strings-attached man – just not one as young as NASCAR driver Elec Monroe. But he sure does get her heart racing. And after she’s tricked into a blind date with him, Tamara gives in to her passion. Things screech to a halt, though, when he asks to meet her children. Whatever happened to wham-bam-thank-youma’am? Suddenly Tamara has to decide how much risk she’s willing to take to experience the power of true love.

Why Did I Read The Book: I read a short story by Erin McCarthy in the Magical Christmas Cat anthology and I really liked her writing. I was thinking I should try her other books when this one appeared in my doorstep. Destiny, baby!

Review:
This is very much a straight forward story about two people falling in love: no major conflicts, no villainous villains (although there is the crazy bimbo stalker which I shall not mention again) , no end of the world approaching. Just this: first came sex; then love; then marriage. And they were happily ever after. Believably.

Rookie Nascar racer Elec Monroe and widow Tamara Briggs hit if off straight away as they meet at a party and they end the night in bed doing things that her body has forgotten after 2 years, three months and three weeks without sex. Although her body is more than grateful to Elec for the reminder of how good sex can be, her mind is freaking out about their age difference (she is 32 , he is 25), feeling guilty about her dead husband, about her children, embarrassed for having sex with someone she doesn’t even know the surname of. But yeah, ding-dong, the Goddess of God Sex and Undeniable Connection hath spoken and Elec and Tamara are very much set to become a thing.

Even though Tamara has to analyse everything and tries to run, Elec is pretty much sure of what he wants and he wants her. Because he sees in her the sort of woman he would like to spent time with, who is so much more than the bimbos he is used to date (please don’t let that put you off Elec, there is a good reason why has dated only bimbos so far ok? – and it is rather sweet one) .

I think the strength of the novel lies in its humour – from Tamara’s inner monologues about how much she would like to get into Elec’s pants to the self-deprecating view she had of herself. There are quite a few scenes that are of the Very Funny variety including one right after they meet where they are about to have sex and realise that neither of them has a condom and they start a crazy hectic search for one

She froze. Oh, damn it all to hell and back. “No”, she said, stepping back so she wouldn’t be tempted to touch him again. She was as fertile as the freaking Nile and she might be taking a walk on the wild side, but she wasn’t insane enough to risk getting knocked up with a younger pit crew member’s illegitimate child. The very thought of the scandal, of having to explain that to her seven – and nine- year-olds, and to her own mother – good God, her mother – was almost enough to douse the fire of her desire. Almost.

There are also plenty of humorous exchanges between Elec and his sister and brother and between Tamara and her friend Suzanne. Not to mention the other car racers Ty and Ryder (sequel bait!).

I liked the way they fell in love – it was simple and easy. They clicked and really, Elec was a sweetheart , a dream man – perfect in his dealings with Tamara, how he addressed her issues with her body after giving birth to two children, how he behaved with her children, how he was awesome in bed – indeed my cynical self would say he was almost too perfect – but I happen to know there are real men out there that are indeed good fathers, good husbands, good people – and this another point where the novel shines : there are no silly conflicts they behave like real people and react like real people to issues. There are no games, no pretence, just two adult owning up to what they feel, even if they think they should not be feeling it – because its too much too soon, or inappropriate. And it was heart-warming to see how Elec’ relationship with Tamara’s children warmed up her mother’s heart.

I have two big grippes with the novel though – one comes from personal experience and this experience reflected on the way I read the book. I resented the fact that Tamara’s age was such an issue and how sometimes it came across as if she was terribly old – come on, she was 32! Not exactly middle-age is she? The problem of falling in love with someone younger is also something I can’t relate to and don’t understand – I do appreciate the fact that is a question of “it’s me, not the book” But it just so happens I am 32 and Dear Partner is very close to Elec’s age.

The other grippe is less controversial and more objective: there were far too many repeated thoughts – of Tamara’s problems with her body , of Tamara’s problems with Elec being so young and there was one particular sentence that appeared every chapter or so that had Elec thinking how something that Tamara did was “the sexiest damn thing he has ever seen”. It got really old, really soon.

All things considered, I did had a good time reading Flat-Out Sexy but in all honesty I was expecting a little bit more not only because of my own (albeit limited) good experience with Erin McCarthy but also because of the buzz this book has been getting online. Basically: I think it lacked oomph. I was expecting something like a hurricane to sweep me off my feet and got only a light, nice summer breeze that has come and gone without leaving any lasting impressions.

Notable Quotes/ Parts: Elec was such a nice man:

Being in her house, with her and her kids was comfortable and satisfying, just as much as being in bed with her was, though in a totally different way. Making love to Tamara satisfied him physically and as a man, a lover. It was hot and sexy and emotional, intimate and intense. Sharing an evening at home with her satisfied his need for a friend, for companionship, for the need he had to protect and take care of someone.

Additional Thoughts: This is my first “Nascar” romance and I hear that are plenty out there – I am curious to read more. Can someone recommend me one?

Verdict: Hot, funny, light, quick read and nothing more. Not that there is anything wrong with that.

Reading next: The Missing by Shiloh Walker (oh-oh, Ana is NOT a happy reader right now)