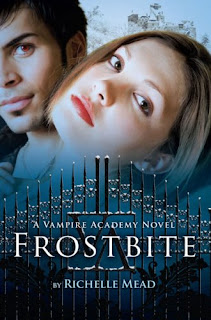 Stand alone or series: Book 2 in the Vampire Academy series

Why did I read this book: Read Vampire Academy in a day, and needed more. Pronto. (This was one of those rushed-drive-to-Borders-at-10:59PM-to-frantically-find-the-next-book-in-the-series-because-you-NEED-MORE type of book)

Summary: (from RazorBill.com)
Rose Hathaway’s got serious guy trouble. Her gorgeous tutor Dimitri has his eye on someone else, her friend Mason has a huge crush on her, and she keeps getting stuck in her best friend Lissa’s head while she’s making out with her boyfriend, Christian. (So not cool).

Then a massive Strigoi attack puts St. Vladimir’s on high alert, and the Academy crawls with Guardians–including the legendary Janine Hathaway…Rose’s formidable, long-absent mother. The Strigoi are closing in, and the Academy’s not taking any risks. This year, St. Vlad’s annual holiday ski trip is mandatory.

But the glittering winter landscape and the posh Idaho resort only provide the illusion of safety. When three students run away to strike back against the deadly Strigoi, Rose must join forces with Christian to rescue them. Only this time, Rose–and her heart–are in more danger than she ever could have imagined…

Frostbite resumes very shortly after the dramatic conclusion of Vampire Academy. With Victor Dashkov imprisoned after his attempts to use Lissa’s unique Spirit powers to temporarily heal him, life resumes for Rose and Lissa at St. Vladimir’s. Only a select few officials now know what Lissa’s powers really are, and she has begun on medication to help her moods. While the meds cut off Lissa’s powers, Rose notices that Lissa is happy and seems healthy–she no longer is cutting herself, and Rose doesn’t sense much of the darkness that was plaguing her best friend. But, while things are going well for Lissa, life is getting tough for Rose. On her trip to take a Guardian examination, Dimitri and Rose discover that an isolated Moroi home–protected by Guardians, including a living-legend Guardian–has been decimated. Every Moroi and Guardian has been killed, the magic wards that protected the home had been penetrated by a silver stake. Which has even worse implications–since Strigoi cannot handle silver, and can only attack at night, this means that the Strigoi are in league with humans in finding and killing Moroi. When another group of Moroi are discovered dead in the same manner, with a silver stake penetrating their wards, St. Vincent’s decides to take action. Instead of sending their students home for the holidays, the group will stick together and make a trip to a Moroi ski resort. Safety in numbers and all that.

The Guardians have their hands full, trying to track down the responsible Strigoi and accounting for both the students and other vulnerable Moroi around the country. Meanwhile, Rose’s life seems to be falling down around her. Lissa spends more time with boyfriend Christian than she does with Rose, Dimitri refuses to pursue a relationship and instead seems to be moving closer to an old friend who he could partner with as a Guardian and lover, and Rose’s harsh Guardian mother is back on the scene causing serious friction.

And then, there are the restless, gung-ho Dhampir and Moroi students who want revenge on their Strigoi attackers, and Rose is thrown into the middle of the fray yet again.

Frostbite continues with some of those tantalizing ideas planted in the first book, examining the Strigoi more in-depth. Whereas in Vampire Academy, the Strigoi almost felt like anonymous boogey-men (until the very end), they certainly are a palpable, dangerous presence in this second book. The threat of the Strigoi here, and the students that rally against them almost had a more mature Harry Potter-esque feel. As with Vampire Academy, my favorite part of this book was Rose, and seeing how she handles the many problems she faces. Rose comes across as a surly teenager early in this novel, angry and jealous that she cannot talk to Lissa about her problems, pissed at her mother for not ever being there for her, and hurt over Dimitri’s apparent rejection. She shuts herself off from others then lashes out and, in the harsh words of Dimitri, shows how young she really is. As the situation grows drastic, however, Rose is forced to mature dramatically–and by the end of this novel, she has become someone older and wiser, as she and her friends realize that being a Guardian is not as glamorous as they had thought.

The growth and development of not only Rose, but also with characters from the first novel, Mia and Mason in particular, was very impressive. Whether it be the angst between Rose and Dimitri, tension with Rose and her mother, or the strained dynamics with Rose, Mason and Mia, it is the relationships that really fuel this book. The only character who I think needs more development is Lissa. It’s almost strange that we learn so much about Rose and how she feels about Lissa, even slipping into Lissa’s actions through their bond, and yet Lissa remains remote, separate from the action of the story. I expect that as the books continue, and we learn more about what Rose being “shadow kissed” means, we’ll learn more about Lissa and her fate. Continuity-wise, I really liked reading a few more hints about Lissa’s (and Rose’s) powers, and I cannot wait to see how this plays out in future books.

Notable Quotes/Parts: I loved the scenes involving Rose and her mother–in one memorable section, Rose and Janine have a sparring session, where Rose’s mouth gets the better of her, and a black eye ensues.

Additional Thoughts: On the cover…I’m not sure who these characters are supposed to be? Lissa and…Dimitri got a hair cut? Rose dyed her hair blonde? Mason suddenly became an olive skinned brown eyed dude? I do like the “VA” gate on this and the first book, although I far prefer the sassy model for Rose on book 1.

Verdict: Another wonderful entry, even better than the first book because of the higher stakes, in my opinion. I cannot wait for Shadow Kissed (book 3)!

Reading Next: Succubus On Top by Richelle Mead