Look at the beautiful cover for the next installment of Kresley Cole’s Immortal After Dark series! A big thank you to the great Katie and and to the awesome Meljean Brook for this gift! 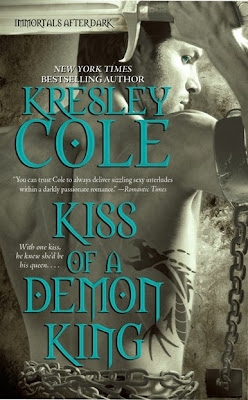 So what do we think? I have to say, this is my favorite cover so far. It certainly is a long looooooooooong way from those cartoonish covers – remember a Hunger Like No Other (book 1)? 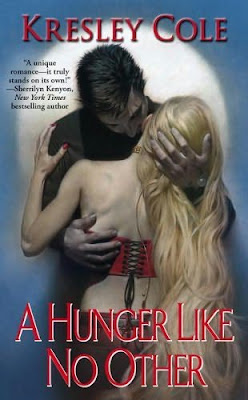 Kiss of The Demon King by Kresley Cole is to be released February 2009.

Here is the summary:

His obsession: the enchantress who surrenders her body, but not her heart.

After Sabine, the Queen of Illusions, lures and traps Rydstrom Woede in her lair, the ruthless warrior fights to resist her seduction. But his fierce demon nature lusts for her delicate body and won’t be denied. Even as Rydstrom plots to escape, he still intends to claim Sabine as his own—on his terms.

Her downfall: the battle-scarred demon who vows to keep her at all costs.

When Rydstrom breaks free, her abducts Sabine, turning the tables. Now she’s the one struggling to resist his delicious torment. With each relentless encounter, Sabine hungers more for her merciless adversary.

They were never supposed to want each other this much. . . .
If they can defeat the sinister enemy that stands between them, will Sabine make the ultimate sacrifice to save her demon? Or will the proud king lay down his crown and arms to keep his sorceress?

I can not wait!