We’re laying down a little groundwork self-pimpage here, and getting the word out early! As some of you may have guessed, this is my favorite time of year. The chill of autumn (well, as much of that as you can get in southern California), the return of good TV, and–of course–HALLOWEEN. Not only do you get to concoct brilliant costumes, but a rush of horror films hit theaters, amusement parks such as Universal Studios and Knott’s Berry Farm have their annual Halloween scarefests (note to anyone in the SoCal area–Knott’s is not worth your time; go to Universal instead!), and classics like The Exorcist or Rosemary’s Baby are on cable for most of the month.

Next week, in true holiday spirit, we will be hosting a Halloween Week in which we celebrate our favorite monsters of books and film! BUT, as we quickly discovered when trying to schedule the week, it is impossible to fit in all the goodness of horror into a mere seven days (Zombies alone deserve an entire week of devotion…and oh yes, there will be a Zombie Appreciation Week)–so I thought I’d cover one of the topics we regrettably could not cram into the schedule.

So, for today’s topic, I present you with: The Horror Comedy 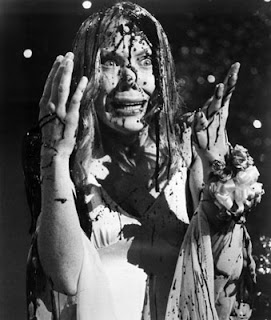 What is it about Horror that fascinates us so? These works elicit a strong reaction–much like other literature or artistic outlets, the Horror genre invites us to feel vulnerable, terrified, frightened. And, not really surprisingly, there’s a fine line between abject terror, and hilarity–anyone who has seen Troll 2 knows this. When a film–or book, for that matter–skillfully masters both horror and comedy, the result is priceless.

Here is a list of Horror Comedies that Just. Effing. Rock. (Note, this list does contain a few horror films that are so bad, they are hilarious–and thus deserve inclusion for entertainment value alone) 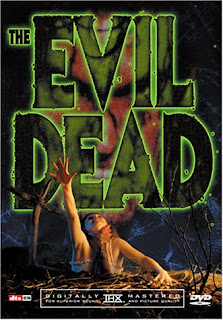 I’ve already posted at length about my love for these films–but these truly are the ultimate in horror comedy. From a shoestring budget director Sam Raimi (yes, THAT Sam Raimi, of Spider-man fame) and the legendary Bruce Campbell created the indie cult-classic The Evil Dead. Returning to the scene with more funding–and an ever growing fanbase–Evil Dead II and Army of Darkness were born. 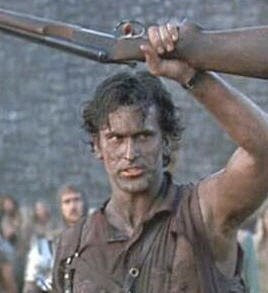 I don’t think it gets any better than Ash reeling off his quippy one-liners, while simultaneously chainsaw hacking and boom stick blasting a legion of undead deadites (led by Evil Ash). The Evil Dead trilogy reigns supreme over all B-horror comedies, and will always hold a place in my heart. Note: I have convinced Ana to watch all three films, and she will be posting her opinion during Halloween Week! 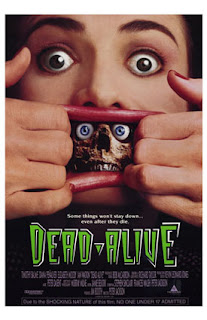 Before The Lord of the Rings, Peter Jackson made horror films. Damn good, incredibly gorey, side-splittingly funny horror films. And my favorite of the bunch has to be Dead Alive.

Opening in Indonesia, we see a New Zealand zoologist capturing the very rare Sumatran Rat Monkey–but he is stopped by the natives when they see a bite mark on his hand (the natives here look very similar to Jackson’s later Skull Island inhabitants in King Kong–it’s cool too see his techniques early on /geekout). As the zoologist meets a gruesome fate, the story moves to Wellington, New Zealand. Our protagonist is Lionel, an awkward young man who lives at home with his controlling, manipulative mother. Lionel’s counterpart is Paquita, daughter of the local grocer. Paquita has her fortune told by her grandmother and learns that she will find true love that very day–but the road will be hard and bloody…and then, Lionel walks in. Paquita, naive and determined, will not relent until Lionel agrees to take her on a date. The two later take a stroll in the Wellington Zoo. Lionel’s overbearing mother spies on them and in the process is bitten by the sick claymation Sumatran Rat Monkey. Mommy Dearest then gets sick, parts of her (like her ears) start falling off, and then she starts biting people. Zombie style. Lionel tries to keep her (and the others she has infected) a secret by drugging them on animal tranqs and locking them in the basement…but come on, you know that never works.

Said to be the goriest movie ever made, Dead Alive also is said to have used the most fake blood of any movie. Ever. 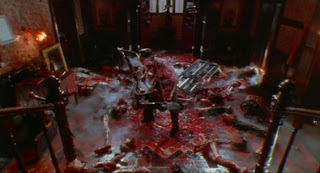 3.Return of the Living Dead 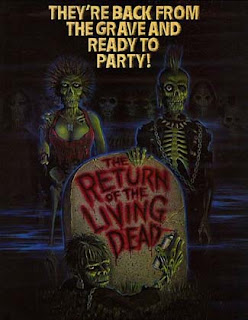 BRAAAAAAAAIIIIIIINS!!!!!!! John Russo, co-producer of Night of the Living Dead with George Romero, retained rights to the “of the Living Dead” title, and wrote Return of the Living Dead as a direct sequel to the first film. The book was rewritten for the screen and changed from a serious tone to a total horror comedy. Return of the Living Dead has unabashed nudity, talking, plotting zombies (that just want to eat braaaaaaiiiiins!) that will not die (chop em up, shoot em in the head, it doesn’t matter). This is another cult classic and for good reason–it’s hilarious. Plus, it has one of the sickest soundtracks ever. 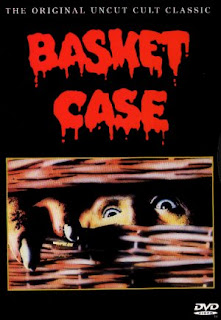 A young man named Duane has some serious issues–he carries around his mutant twin brother in a basket (hence the title). Duane and his twin, Belial (nice name drop) used to be conjoined twins–and their father, revolted by his monstrous sons, had them surgically separated. The movie follows the twins as they seek murderous revenge on the doctors who separated them.

The movie was so successful, it spawned a sequel. Basket Case 2 has one of the greatest, most hilarious, disturbing love scene ever. Direct-to-video goodness. 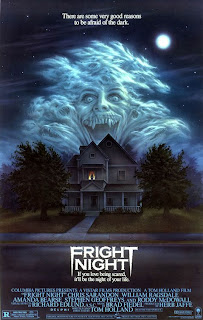 An homage/mishmash/vampire horror comedy that totally delivers (can I also point out that the cover poster is awesome, and it used to scare/fascinate me as a kid). Charley Brewster is a teenager obsessed with horror movies and tv shows, and he suspects that his lady-killer new next door neighbor is a vampire–and he’s right. To stop him, Charley enlists the aid of his favorite horror show host, the old and cynical Peter Vincent (very Vincent Price). The movie is a cool homage to Dracula in an ’80s setting, and to Vincent Price classics–still very much a favorite of mine. Plus…I always thought Jerry Dandridge (the vampire neighbor) was hot–yeah, I was like 11 the first time I saw this movie, like that matters. 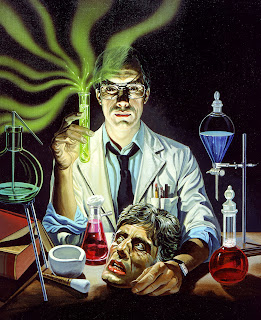 What can I say about Re-Animator? It’s sort of a new take on Frankenstein, with a brilliant young student in Europe trying to re-animate the dead. This movie is incredibly over the top, gory, disgusting, and hilarious–and it gives a while new meaning to “getting head”. 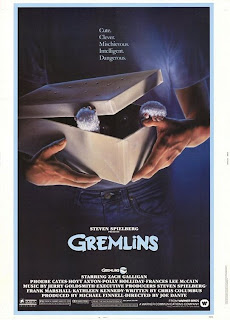 So, I chose the Gremlins films, but there were a slew of these in the ’80s and ’90s (i.e. Critters, Tremors). Who DOESN’T love Gizmo?! I always wanted one of my very own. My sister and I even had a Gizmo doll. (And no, we didn’t try to feed it after midnight, splash water on it, or subject it to bright light). 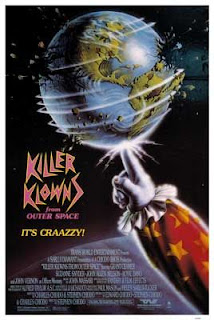 Alien clowns come to earth to harvest humans, turning them into cotton candy and drinking them up. Yeah, it sounds ridiculous and comedic…but it used to creep me out. Still does a bit. I mean…look at them: 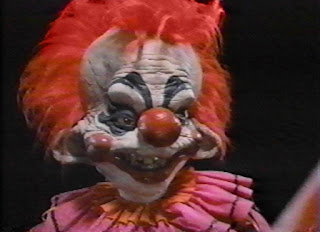 They have a cool theme song though. “Killer Klowowowowns…from Outer Spaaace…” 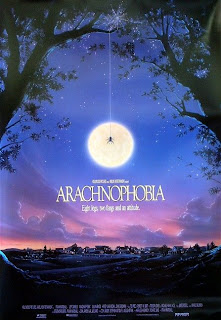 A poisonous Venezuelan spider hitches a ride over to California, where it breeds with local spiders creating a deadly new species. The spiders infest the small Californian town, killing people. Only a young doctor–who also happens to be an arachnophobe–figures out that the spiders are killing people, and they must exterminate all the deadly creatures before it is too late. Arachnophobia is just a flat out entertaining movie–it does scare (the whole scene where they find the Queen spider and have to take it out is…well, icky), but mixes in good acting, high budget production, and some good laughs too.

9. Night of the Creeps 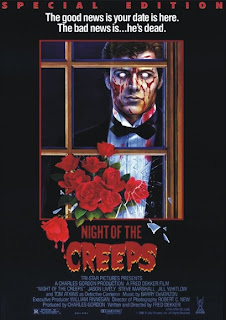 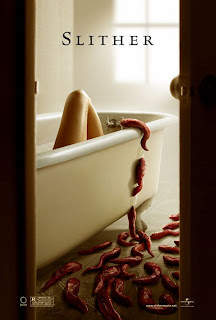 Speaking of Night of the Creeps, Slither pays homage to the classic in a big way. An alien worm-leech looking thing burrows its way into Grant Grant, who in turn worm impregnates a townie, who then gives birth (of sorts) to thousands of slug-worms that infect the townspeople, turning them into sort of zombies (Grant is the king-organism, and they all share a kind of hive mind). Nathan Fillion stars as the small town cop, and the totally underrated Elizabeth Banks plays his lady crush. Slither is slimy, sticky, disgustingly good fun. I *really* love this movie, and it’s a shame it is so unappreciated. Seriously. Watch it. 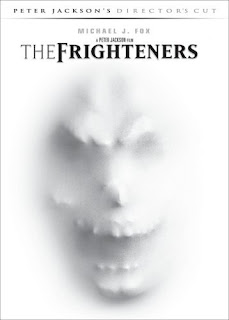 Yeah, another Peter Jackson flick. Michael J. Fox plays Frank Bannister, a psychic PI who can see the dead after a traumatic car accident and the death of his wife. However, a rash of murderers hits the town, and a grim-reaper looking ghost is responsible, squeezing the hearts of the living for his victims, and each of his victims’ ghosts bear a number carved on their foreheads. Frank realizes this is an old killer–and one that holds personal meaning for him. Peter Jackson really is a genius storyteller. The Frighteners (another under appreciated film) is just damn entertaining–and again, if you haven’t seen it yet, it usually runs on scifi around this time of year. Do yourself a favor and check it out! 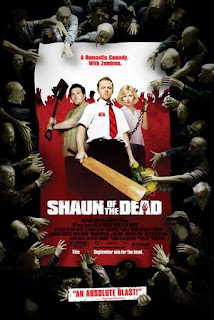 Cat’s outta the bag with the magic that is Shaun and Ed. I laughed my ass off in the movie theater with this wonderful, smart, FUNNY zombie flick. What’s even cooler is that Simon Pegg and Nick Frost manage to make this more than just a campy parody, but create a damn good zombie movie too. The scene with the pool queues and Queen. Pure, unfiltered awesome. 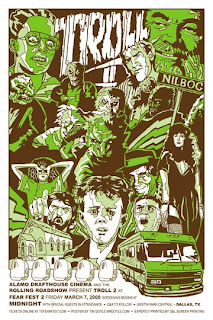 Last, but certainly not least, my favorite terrible movie, Troll 2. So, I should clarify, Troll 2 isn’t really a horror-comedy per se. It’s more of…well, to be perfectly frank, one of the worst movies ever made. It’s awful. From the opening sequence with Peter running through the woods and the beautiful girl with the painted on freckles and the neon green goo, it’s just terrible. But, it’s so terrible it’s awesome. I really can’t describe the marvel that is Troll 2. I read a review somewhere that says it best–imagine the stupidest, most idiotic shit you can. Got it in your mind? Well, Troll 2 takes that pinnacle of idiocy…and goes higher. Some incredible dialogue: “They’re eating her! And then they’re gonna eat me! Oh my goooooooooooood”; “I know! Double Decker balogna sandwich!”; “If my father found you up here, he’d cut off your liiiitle nuts and eat them”; “I must do it! I must!”; “Nilbog! That’s Goblin spelled backwards! This is their kingdom!”; “Don’t fret!”; “Let’s heaaaaaaaaat it up!”; and more. Really. Just watch the best of clips below:

So there you have it. My lucky 13 favorite Horror Comedies. Sort of. There are more (so terrible they’re good: Attack of the Killer Tomatoes, Manos: The Hands of Fate; The Tarantino-Rodriguez Revival: From Dusk ’til Dawn, Grindhouse)…but these are my all time favorites. And really–if you haven’t seen them, you should. Especially Troll 2. Preferably with a lot of beer.