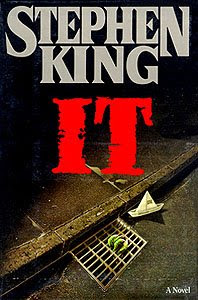 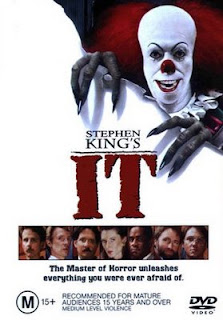 It is one of my all time favorite novels, and remains to this day one of the scariest books I have ever read. When I get stranded on a desert island, It is one of the five books coming with me. Adjectives like graphic, powerful and emotional come to mind when trying to describe this novel. For me, It is King at his finest hour, writing about what he does best–a small Maine town, wracked with ugliness and hate, the endurance and strength of youth, and the loss of innocence, when faced with unspeakable horror.

“The terror, which would not end for another twenty-eight years–if it ever did end–began, so far as I can know or tell, with a boat made from a sheet of newspaper floating down a gutter swollen with rain.”

Thus opens the novel, with a story of two brothers–Stuttering Bill Denbrough and his younger brother Georgie. On a rainy afternoon in Derry, Maine, Bill makes his brother Georgie a paper boat. With Bill too sick to go outside and sail the the ship on its maiden voyage, Georgie plays by himself, setting it afloat in the rainwater flooding the street gutters. But, as boats afloat in street gutters are want to do, Georgie’s precious new toy falls into a storm drain, and Georgie is crushed…until a clown appears in the sewer, holding the boat. The figure in the drain introduces himself as Pennywise the Dancing Clown, and offers Georgie a balloon, and his boat back. Innocent, curious Georgie accepts, and pays dearly for his brother’s boat with his life.

It follows a group of seven misfits, the members of a self-proclaimed “Losers Club”, as they discover that some thing is very wrong in Derry, terrorizing and killing the town’s children. Bill Denbrough becomes the leader of the group, sharing his strength and determination to stop the murderer of his brother, no longer hidden by his stuttering. Eddie Kaspbrack is best friend to Bill, and by way of his domineering, manipulative mother is an asthmatic hypochondriac. Ben “Haystack” Hanscom, overweight and the new boy in town, joins up with Bill and Eddie after they help him evade local bully Henry Bowers. Richie “Trashmouth” Tozier is the joker of the group, doing impersonations and reeling off wisecracks; he has an impulsive, defiant streak as he mouths off to just about anyone. Beverly Marsh is the darling of the group, a beautiful girl but ostracized by her classmates because her family is poor, and her father works as a school janitor. Stan Uris is a very logical, methodical boy, who is bullied because he is studious, reserved, and Jewish. The last member of the club is Mike Hanlon, singled out by bully Henry Bowers because he is black. When Mike tries to escape their taunts, the seven ‘losers’ come together for the first time, standing down Henry and his gang, throwing rocks and landing blows (one of my favorite scenes of the novel). Mike, cataloguing and photography enthusiast, takes a picture of them that day–and the Losers Club is officially formed.

The seven soon realize that they have more in common than just being outsiders–each of them has had a first-hand encounter with something terrifying, and together they figure out that It is the same being, some kind of shapeshifting monster that feeds on children, assuming the form of their worst fears. It is the same creature that ripped Bill’s brother Georgie’s arm off as Pennywise the Dancing Clown and that devours Patrick Hockstetter as a swarm of leeches…and Bill is determined to fight and kill It.

The book is told in two parallel stories–one that follows the children fighting It back in 1957-1958, and then as adults in 1984-1985. The adult seven find out that they did not end up defeating It back when they were children, and they must return to Derry, to the nightmare reunited, and finish the job they started nearly thirty years before. 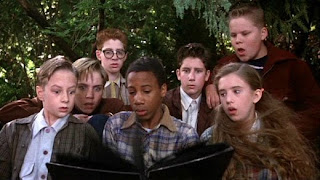 It is such a powerful book, not just because of the terrifying and graphic horror sequences with Pennywise (the drain scene, the photographs, the house and the sewers, etc), but because of the characters. Meeting the seven characters, both as adults and as children, learning what they had faced together, seeing them as successful adults, and the numbing horror that they physically could not remember their pasts in Derry–it’s strong stuff. I came to love each of these characters, fearing for them, hoping for them, rooting for them each step of the way. Who says that horror has no soul, no appreciation for intelligent characterizations and and emotions? I dare any one of those critics to read this novel and not be moved by it.

Not to misguide anyone, however, into thinking this is a book without its share of gore and horror–because it is. Pennywise the Dancing Clown, with his silver eyes, multitude of floating balloons and his sanity-stealing deadlights scares the crap out of me. Always has, always will. It isn’t just the monster that scares, though. It awakens only when cataclysmic events, of intense hate or pain or depravity occur–and in 1984, the story begins with the senseless murder of a homosexual man. The people of Derry, from folks like Beverly Marsh’s abusive father to the neighbors that simply look away from the violence and murder before their very eyes, get as good as they give. Racism, homophobia, and self interest drive the small town–as Don Haggarty says at the beginning of the novel, “[Derry’s] a lot like a dead strumpet with maggots squirming out of her cooze…It’s a bad place.” Above all else, It is a story about the loss of innocence, and one that I love wholeheartedly.

Years later I would read The Dark Tower series by King and, having amassed quite a few King novels under my belt by this time, be amazed by how many of his different novels were related to the Dark Tower nexus. As Roland would say, all things serve the beam, and It (especially the origins of It and the importance of the Turtle) ties in beautifully. 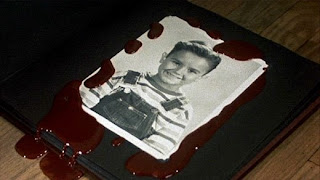 In 1990, a television movie was produced based on the novel, titled Stephen King’s It. I have to confess, I first saw the movie before reading the novel (I was around 12 years old the first time I saw it, and pretty quickly afterwards I sped off to the library to find the book). Perhaps this makes me slightly partial to the film adaptation–I believe this to be (easily) the best Stephen King small screen adaptation, and one of my favorite television movies, period. Certainly, I think it is the scariest tv movie I have ever seen–as a kid the same age as those in the book and in the film, it held even more meaning for me.

The movie is pretty loyal to the source material, at least, as loyal as it can be given time, budget, and ratings restrictions. The homophobia is cut out, some of the more graphic scenes (Henry cutting Ben’s stomach, for example) are deleted, as are certain portions of the book altogether (the whole Patrick Hocksetter character, the entirety of the scene in the decrepit house, the scene with Beverly after they defeat It for the first time as children). But, where it does stay true is capturing the camaraderie of the seven “losers”, tempering the fear of It with the strength of friendship, balancing horror with the happier aspects of young kids on summer vacation, finding strength and happiness with each other. And, for all that it cuts down on the gore and more graphic nature of some of It‘s violence, the film proves that it doesn’t always take buckets of blood to terrify–relying on it’s awesome score and soundtrack, strong acting performances, and more ominous symbolic methods (bloody footprints, a lone balloon that explodes with blood). I’ve always been a proponent of claymation and stopmotion, as well as more hands on make-up and prop methods for special effects (as opposed to a lazy reliance on CGI) so far as horror movies are concerned, and It does this very well, also by relying on atmosphere and acting over costly (and often ineffective) effects. *Although I think the film could use an update, especially for that last battle and the visualization of the deadlights.*

Casting-wise, It strikes solid gold with Tim Curry as Pennywise. 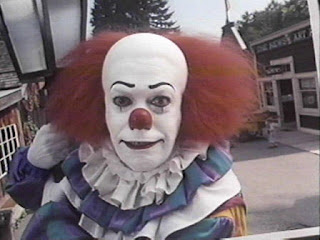 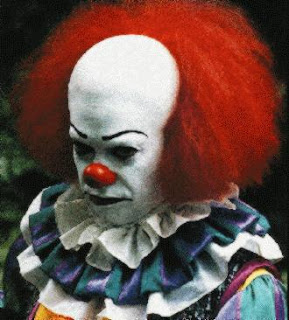 His voice, his maniacal smile, his laugh, his delivery, the way his eyes get all red from the thick layer of makeup…holy crap, Tim Curry scares the shit out of me with his Pennywise! His script also sticks very closely to many of Pennywise’s lines from the book (“They float, Georgie. They all float.”; “You’ll die if you try to fight me. You’ll die if you try…”), and perhaps I have been spoiled by his performance. Certainly I cannot picture Pennywise any differently than Tim Curry in terrifying makeup and costume.

So far as the rest of the cast, I like the child actors they picked, in particular Stuttering Bill, Ben, and Richie (Bill played by Jonathan Brandis–who I used to have a crush on; Richie by a very young Seth Green). I would have chosen a different Beverly, but the young actress who plays her still does a great job. The adult actors for the children, however, are not so great. Annette O’Toole is a fine adult Bev, and the other actors for Mike, Stan, and Eddie I think are well selected. John Ritter as older Ben is fine by me, but not my ideal choice. I think Bill is the biggest miss–not that Richard Thomas (of The Waltons fame) does a bad job, but he’s just not Bill. Still, Tim Curry’s excellence is enough to overshadow any casting shortcomings!

The only other huge notable change from the book to the film is the nature of the battles with It, including the ultimate adult showdown–and if you’ve read the book, you have to admit there really isn’t much you can do to translate that more metaphorical, dream-like confrontation to film. The ritual of Chud is not an easy thing to visualize on screen–especially not in a relatively low budget tv movie. The special effects could use some work, as I mentioned earlier, but for the most part, I am pleased with the way both confrontation scenes are handled.

What else can I say about the book and the film? They are both superb–and I hope that everyone gives It a try.

Book: 10 Perfection, a Classic in its own right

Movie: 9 Damn Near Perfection, suffering only from some off-kilter casting, dated effects, and PG rating

Stick around as later Ana gives her take on the book–I get to grill her about her opinion! But for now, I leave you with a clip.