Title: Goddess of the Sea 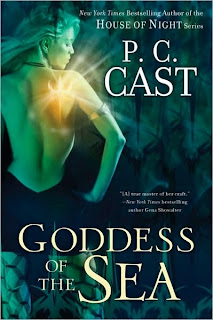 Stand alone or series: Book 1 in the Goddess Summoning series

Summary: (from amazon.com)
After her plane crashes into the sea, an Air Force Sergeant finds herself occupying the body of the mythic mermaid Undine-and falling for a sexy merman.

Why did I read this book: We received an early copy of the trade paperback reprinting (originally this book was published in 2003), and having heard wonderful things about P.C. Cast’s young adult novels, I decided to give this one a try.

Air Force Sergeant Christine “CC” Canady returns to her small apartment, KFC and two bottles of champagne in tow, to celebrate her twenty-fifth birthday. Alone. Drowning her sorrows in champagne, CC decides to watch an upbeat, empowering movie–The Witches of Eastwick. And, a little tipsy, a little lonely, and inspired by the women in the film, she decides to have a magic ritual of her own. Flipping through a book from her university days, she re-enacts an old pagan ritual, dancing in the moonlight on her balcony. CC wants empowerment, and above all, she wants magic in her life–and she makes her heartfelt wish under the starry night.

The next morning she awakens late, and she should have a bitch of a headache–but CC has never felt better in her life. Heck, she even sees a physical change, a glow, in her appearance. Dismissing her drunken escapades as silliness, CC gets on with her life and runs some errands before deploying on her six month tour of duty in the middle east. When she finally heads on the last leg of her journey–an uncomfortable C 130 from Italy to Riyadh, Saudi Arabia–CC is jittery, tired and anxious, and she’s terrified of flying in the large cargo plane. As fate would have it, the plane has a massive malfunction during the flight and they crash land in the Mediterranean. CC, wounded and not much of a swimmer struggles to get free of the plane, but is sucked down into the sea, drowning. Near death, CC feels a tug on her leg, and comes face to face with a beautiful mermaid who frantically asks if CC wants to live with magic in her life at any cost. CC agrees, and the extraordinary happens.

When CC comes to, she finds herself in the body of the beautiful, blonde mermaid, Undine. And, while she is alive and has certainly undergone some magic in her life, she finds not everything is blissful. Undine’s half brother, Sarpedon, finds CC and violently tries to force himself on her, telling her that she cannot evade him forever–she will be his mate, and he will control the oceans as is their birthright as children of Poseidon. CC, terrified, manages to frantically escape Sarpedon by swimming to a quiet grotto under the protection of Undine’s birth mother, the goddess Gaea. Gaea welcomes CC with an open heart, explaining that she knows that it she is CC (daughter of Gaea’s soul) in Undine’s (daughter of Gaea’s flesh) body. Gaea had heard CC’s ritual and witnessed her dance under the moonlight, and was moved by her devotion–so when she learned that CC’s life was soon to end, she had to intervene. Knowing Undine always wanted to be of the land, Gaea found the perfect opportunity to help both of her daughters by switching their souls. Unfortunately, Gaea never knew that a main reason for Undine’s unhappiness and fear was because of Sarpedon’s relentless pursuit–and now CC must live with the consequences. As a full goddess, Gaea manages to keep Sarpedon out of her grotto waters, but knows CC cannot stay so confined forever. Instead, Gaea proposes a new solution–to keep CC safe Gaea will grant her legs, but CC must return to the water every third night to resume her true form as a mermaid or else she will die. In order to keep her human form permanently, and to forever escape Sarpedon, CC must find a man who will love her completely for who–and what–she is. Gaea warns that the transformation is hard, and could be very painful physically. She also warns CC that the year is 1014, and that they are not in the Mediterranean, but rather in the cold waters off the coast of Wales–and as such, CC must tread carefully as there is great mistrust and violence against magic of any kind. Faced with her tough situation, CC accepts Gaea’s gift, and becomes a shipwrecked, traumatized princess, washed ashore. Gaea grants CC her legs and fine clothes of riches and jewels, then summons a storm to give the shipwrecked princess story credence. The storm hits before CC manages to get to land, and she nearly drowns again. CC is rescued once more, but this time by a merman named Dylan–one that she knows from a dream, and one who she cannot help but feel attracted to.

Finally ashore, a human knight named Sir Andras comes to CC’s human rescue. He takes her to Caldei Monastary nearby to offer her sanctuary while she tries to “remember” exactly who she is and where she comes from. Andras is immediately taken in by CC’s beauty (she still is in Undine’s undeniably beautiful form)–but others, especially Abbot William, mistrust her beauty and her strange loss of memory. CC soon finds herself in a desperate situation, subject of a medieval witch hunt and embroiled in the politics of the Gods, the inescapable threat of Sarpedon, and her own tangled, doomed love for the merman Dylan and the sea.

I have to admit, Goddess of the Sea took me completely by surprise. The book begins with a lot of cheese, as CC repeatedly narrates about her longing for “magic”. After the silly first chapter, I wasn’t feeling very compelled to continue with the story. As soon as the story took a more serious turn, however, I found that I could not put this book down. With Goddess of the Sea, Ms. Cast has created a retelling of the Little Mermaid fable that is undeniably beautiful and wholly original. Furthermore, Ms. Cast understands what so many paranormal/fantasy romance authors do not–that there needs to be a REAL sense of peril for the story to believably work. The danger of Sarpedon, and later with the Abbot William and Sir Andras ups the stakes and creates a palpable danger–I cannot stress enough how much I appreciated there being a true threat to the lovers CC and Dylan. Ms. Cast’s plotting is wonderful, moving fluidly from future to past and capturing the “magic”, romantic fairy tale atmosphere for this story.

Character-wise, Goddess of the Sea also shines. The clever twist of having a modern heroine in a less understanding time keeps the story fresh and accessible, and makes CC/Undine a sympathetic and relatable character as she is just a normal girl in borrowed, beautiful skin. With Dylan, I felt a real understanding of him as a distinct character–not just the usual brawny alpha male, capable of unselfishly pleasuring heroines for hours at a time. Dylan’s humble parentage prevents him from ever being able to best Sarpedon physically, but the quiet, introverted merman’s dedication to Christine is heartbreaking in its honesty. Theirs is a romance worth reading–the interactions between both CC and Dylan are beautifully crafted. This is one romantic tale that is thankfully light on most of the usual fluff, and completely won me over.

The more villainous characters and other secondary character also were well-wrought. Neither Sarpedon as the greedy villain, nor Abbot William & Sir Andras come off as one-note or stupidly evil for evil’s sake. Each character has their own personality and history; from Abbot William most likely repressed homosexuality and stunted ability to love, to Sir Andras as a man’s man, completely a product of his time period. Even Sarpedon, who easily could have been written as Eeeevilly two-dimensional, comes across as a petulant, spoiled child (strangely reminding me of that Star Trek episode, “The Squire of Gothos”…I digress). The female characters, especially Gaea, are more predictable in the sort of awakened female empowerment way, but still are well-written.

My only problems with this story lie in some of the inherent cheese, such as CC’s one true wish the have magic of her own. The biggest quibble, for me, was some of CC’s “future filter” of the past and the at times heavy-handed Girl Power sort of message. I’m all for female empowerment, and for this message in literature. What bugs, however, is when the message is given with a total lack of finesse in the writing. For example, CC constantly says to her friend at the monastary things like, “Back where I come from, women are allowed to speak their minds!” or “Back where I come from, women can walk alone after dark without ever needing a man!” sort of sentiments. While the message is one I fully agree with, the delivery can be somewhat annoying. I also am not a fan of characters calling out things like “This is like the Little Mermaid!” point blank. It’s a nitpick, but there you have it.

These minor gripes aside, I found myself loving Goddess of the Sea. I especially give props to Ms. Cast for her choice in ending the fable–CC’s ultimate choice near the ending is far more empowering than any of the verbal girl power soliloquies written throughout the book. In a romance world filled with simple happy endings, Ms. Cast takes a chance with Goddess of the Sea–and it pays off. This is a bittersweet fairy tale, and one I thoroughly enjoyed. I will certainly be looking into reading more of Ms. Cast’s work.

Notable Quotes/Parts: In the monastery chapel, CC sees a statue of the Virgin Mary hidden in a dark, dusty corner, and when she examines it more closely she finds that it bears Gaea’s face. It’s kind of a cool, Mists of Avalon type of interpretation, and CC decides to devote her time in the monastery to restoring the statue–earning scorn from the Abbot William, but winning over the cleaning and cooking women of the monastery.

Additional Thoughts: Fairy tale retellings are a popular choice for authors, especially of the romantic persuasion. Some of my favorites are Beauty by Robin McKinley, the recent A Curse Dark as Gold from Elizabeth Bunce, and in a less traditional spin, the Fables comics from Bill Wellington. So, friendly reader, I pose the question to you–what retellings are your favorites?

Verdict: I found Goddess of the Sea to be completely entertaining, and a wonderful fairy tale romance retelling. I will definitely be reading more from P.C. Cast!