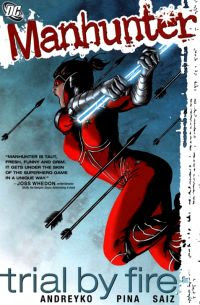 Summary: (from DCcomics.com)
Don’t miss this new volume collecting MANHUNTER #6-14! Prosecutor Kate Spencer is poised to take on the trial of the year, as the eyes of the nation are on her latest case: finding the Shadow Thief guilty of murdering the hero Firestorm.

Why did I read this book: Loved the first volume, and I’m eager to catch up with the monthlies!

Trial By Fire picks up where Street Justice leaves off, with a tie in to DC’s “Identity Crisis” event–the murder of Firestorm (the likable Ronnie Raymond) by Shadow Thief. In Street Justice, Kate manages to best Shadow Thief, but is interrupted by the Justice League before she can finish the job. To herself as she climbs into her car reluctantly, covertly escaping being seen by the JLA, Kate remarks that she’ll just have to kill him the old way–in court.

Trial by Fire showcases the hotshot D.A. in full glory, focusing on the high profile case. I have to applaud Mr. Andreyko’s writing here–the action from the first collection takes a backseat here as the focus is placed firmly on the courtroom drama. As Kate builds her case, we learn more about the young Firestorm, his life and his family, even drawing testimony from characters such as Hawkman and The Man of Steel himself (Of course, the prick Defense attorney tries to pull the perjury card when Superman refuses to reveal his secret identity on the stand). This certainly marks a change of pace from the first trade paperback, but it’s a more humanizing reprieve, and Mr. Andreyko gives Kate a much more human, fragile feel. We see Kate’s pain and self-reproach for her son’s accident, and she genuinely makes an effort to get her family life in line. Including laying off the cigarettes and trying out nicotine gum, if you can believe that. Meanwhile, a noisy tabloid journalist does his poking around Kate’s dirty laundry, knowing that he’s on to something big, especially when he sees Kate meeting with former criminal (and her new forced labor tech specialist) Dylan Battles. 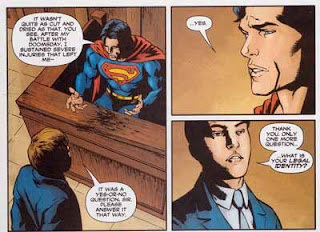 And, amidst all the drama, Kate’s still out there doing the vigilante thang and besting some mediocre villains–in this issue dealing handily with the likes of Cheshire and Phobia.

The other shining storyline in this collection showcases every character under the sun that has gone by the title Manhunter. From Dan Richards to Kate’s predecessor (and arguably best known Manhunter), Mark Shaw. Someone is killing off anyone who has used the moniker, one by one–leaving only Shaw and Kate ripe for the picking. Kate’s old friend and DEA agent Cameron Chase shows up in LA, on the case of the murdered Manhunters, and she enlists Kate’s help. Chase is another strong female lead character, immediately showing herself to be a hardass outsider–and it’s easy to see why these two characters get along so well. The interactions between these two, and along with reluctant sidekick Dylan, is a treat–and a dynamic that will hopefully be explored in further issues.

The last niggling thread is Kate’s supposedly dead father, who emerges, real creepy old man style, at her son’s school. How Kate’s crazy father fits into this story has yet to be seen…

Once again, Javier Pina and Jesus Saiz return as the art team behind these issues, and just as with the first collection I found myself appreciating the quiet, more subdued artwork. While nothing spectacular, the muted colors and no-nonsense outlines compliment the writing beautifully. Although I do miss the original covers by Jae Lee, Jesus Saiz does a wonderful job with these issues.

Additional Thoughts: I don’t have a scanner handy, but I was lucky enough to get autographed copies of all 4 of the current trade paperbacks: 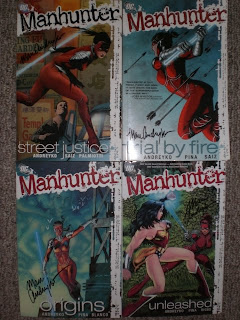 Verdict: All in all, a solid trade paperback and certainly worth reading. Manhunter is one of those books I wish I had discovered sooner and highly recommend to any fans of the vigilante persuasion. Mark Andreyko’s writing is outstanding, and he offers a gritty alternative to the superbabes in the market. While this collection did lack some of the reckless, destructive fun of Street Justice, hopefully Kate will retain more of her edge in the next graphic novel: Origins.