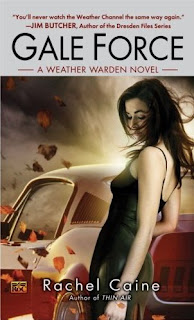 Stand alone or series: Book 7 of the Weather Warden series.

Why did I read this book: Rachel Caine’s Weather Warden series is one of my top 3 all time favorite Urban Fantasy books. I love, love, love this different, frantic series.

Summary: (from amazon.com)
Weather Warden Joanne Baldwin is on vacation when her Djinn lover, David, asks Joanne to marry him. She’s thrilled to say yes, even if some others may be less than happy about it.

Unfortunately, Joanne’s pre-marital bliss is ended by a devastating earthquake in Florida. And she can’t ask David and his kind for assistance. Because the cause of the quake is unlike anything Joanne has ever encountered—and a power even the Djinn cannot perceive.

Confession: I am addicted to the Weather Warden series. I love everything about these books–from the sassy but compassionate heroine, the roiling emotional sea of issues, the breathtaking world building, to the frenetic, break-neck pace of each book. Rachel Caine is one of my favorite authors, and if I ever get the chance to meet or speak with her, I’m sure I would probably pee my pants or something. So, it follows that I am a devotee to this series, and my expectations are very high. And every time, Ms. Caine delivers. In a big way.

As with all the other Weather Warden books, Gale Force begins with catastrophe. Following Thin Air, my favorite novel of the series thus far, Joanne Baldwin is entitled to some time off from saving the world. Placed on forced vacation by the Wardens, Jo shacks up with lover and New Djinn leader David. These two have never really had a respite as they are constantly facing down danger or one of them is dying, etc–but Gale Force begins with a quiet interlude…and David asks Joanne to marry him. Although worried about the consequences of their marriage, Jo of course says yes and immediately plunges into the myriad preparations a bride-to-be must make. While trying on dresses with best friend Cherise, a massive earthquake hits the store. Jo manages to control some of the damage (thanks to her newfound Earth Warden powers through the connection to her daughter Imara–the new Earth Oracle), but when she scans the aetheric to find the cause of the quake, she discovers something alien and darkly malicous tightly lodged in the Earth’s crust. Jo enlists Lewis’s help (her first love and the most powerful Warden alive), but even he cannot extract the dark crystaline substance from the aetheric. And, due to some gut feeling both Jo and Lewis have, they do not tell the Djinn about this strange new problem.

After elisting the help of a Warden named Silverton who also happens to be a radiation specialist, Jo takes off to find the substance in the physical world, hoping to remove it before it can do any more damage. What Jo and Silverton find, however, is more horrific than anyone could have planned for–they find the highly radioactive source inside a dead Djinn. The substance, what the specialist calls ‘antimatter’, is lethal–Silverton dies of radiation poisoning and Jo barely survives. What’s worse is, David and the rest of the Djinn cannot “see” the antimatter; they cannot see that the body encasing the shard is a dead Djinn, and as such they refuse to believe the worries of the Wardens. A terrorist group called The Sentinels takes responsibility for the dead Djinn, and threatens the Wardens to disassociate with the Djinn, or pay the consequences in lives lost and more natural disasters. Jo and David, with their upcoming nuptials, are a main target–and whoever is behind the Sentinel attacks is someone very, very strong and familiar.

In many ways, Thin Air was a reset for Joanne–having lost her memories and the essence of herself to Ashan’s rage, and then being impersonated by a full grown demon. Coming so close to losing everything again, Jo and David become even closer, and this bond is examined further in Gale Force. David’s insistence on marriage–more importantly, on making a vow with a human for as long as they both shall live–is a big deal. Ashan and the Old Djinn are not pleased, and coupled with the other death threats facing Joanne, things get extremely hairy. As per the usual Weather Warden books, this installment features Jo frantically racing from one problem and death-defying act to the next. Ms. Caine’s writing and her incredibly tight plotting, however, manages to keep this from feeling tired or formulaic. This particular storyline involving disgruntled Wardens and a truly alien substance and featuring more than a few older familiar faces, I found to be every bit as engaging as the prior books. The most appealing thing about the antimatter plot point is that the Wardens are forced to deal with the mess on their own–as the Djinn can neither see nor even acknowledge the existence of such matter, the Wardens cannot use their omniscient friends as a crutch. And, when facing the unknown network of The Sentinels, tension mounts since no-one knows who is on their side. The distrust of Jo from within the Warden association, especially with her upcoming wedding, adds even more spice to the mix.

The characters in this book also fit into the series continuity flawlessly–we see more of Cherise and Kevin, which is always a welcome addition. Kevin’s issues (touched on in Thin Air when Jo explores his memories) flare up again in this book, as he goes “undercover” and joins The Sentinels. There’s a particularly powerful, moving scene when Kevin and Jo get to arguing in front of the gathered Wardens. I also like that Cherise is playing a bigger part in these latter books–since Jo doesn’t have many true friends, it’s touching to see their interactions. Plus, I like the X-Files obsessed blonde.

Then, there are the old faces that pop up–Rahel, Ashan, Imara, Lewis, etc. I won’t spoil it here, but there’s a hell of a shock, speaking back to very early in the series. There’s drama and sadness in a painful betrayal. Jo herself undergoes a hell of a time, and, as always, the book ends with a nasty cliffhanger.

While Gale Force delivers more of the action and drama that I have come to love from the series, I was a bit disappointed that some of the resolution from the earlier book–the reversing polarity of the Earth as a result of Lewis and Demon!Jo’s battle–was not addressed. Granted, there are bigger problems at hand, but I hope Ms. Caine can tie everything together soon. Also, I am getting the feeling that the Weather Warden books are nearing an end, or at least I hope they are (I mean, I do, but I don’t!). This book’s ending, in the middle of a major conflict, speaks to this…and I sincerely hope that Jo and David (and Lewis) can finally find some peace.

“You’re kidding,” I said as Lewis negotiated the Hummer into a parking space built for a Hyundai. “We’re meeting at Denny’s? Was Chuck E. Cheese already booked for the president?”

“Emergency meeting,” he said. “This was the closest place we could find where we could have some privacy. Besides, I could use some food–how about you?”

Well. I supposed I could use a Grand Slam or a Moon Over My Hammy or something.

Both are key Denny’s choices.

Additional Thoughts: On playlists in books–I kinda like it when authors include this (either in the actual book, or online). Ms. Caine always includes her soundtrack at the end of each novel, usually involving some Tom Petty and Joe Bonamassa.

Also, news for any Caine fan–a new series, told from the perspective of a Djinn, is in the works! Here’s the blurb:

See the world through a Djinn’s eyes…

For millennia, the Djinn Cassiel, so powerful as to be perceived as omnipotent by humanity, lived apart from mortals and dismissed them as unworthy of her thoughts or energy.

But after refusing a direct order from her ruler, she has been banished, cast out, and cut off from the source of her power–forced to take physical form and survive. What’s worse, without receiving a regular influx of energy from a human Warden, she will die.

Now Cassiel the great, Cassiel the terrible, is living in New Mexico and assisting the Earth Warden Manny Rocha with his filing. But as she gets to know Manny and his family–his wife, his daughter, and his intriguing brother, Luis–she begins to develop a reluctant affection for them.

And Cassiel will learn that humanity may be worth more than she ever suspected.

Verdict: I still think that Thin Air is my favorite book in the series, but Gale Force is no slouch. Definitely an autobuy for any fans of the series. I cannot wait for the next novel–once again, Rachel Caine writes the un-put-downable book.

Reading Next: Manhunter 2: Trial By Fire by Mark Andreyko