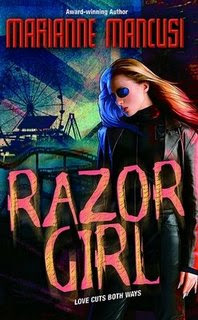 Summary: Molly Anderson is not your average twenty-one-year-old. It’s been six years since she and her family escaped into a bunker, led by her conspiracy theorist father and his foreknowledge of a plot to bring about the apocalypse. But her father’s precautions didn’t stop there. Molly is now built to survive. Yes, Ian Anderson’s favorite book gave him ideas on how to “improve” his daughter. Molly is faster, stronger, and her ocular implants and razor-tipped nails set her apart. Apart, when—venturing alone out of the bunker and into a plague ravaged, monster-ridden wilderness—what Molly needs most is togetherness. Chase Griffin, a friend from her past, is her best bet. But while he and others have miraculously survived, the kind boy has become a tormented man. Together, these remnants of humanity must struggle toward trusting each other and journey to the one place Molly’s father believed all civilization would be reborn: the Magic Kingdom, where everyone knows it’s a small world after all.

Why did I read the book: I got the ARC from the publishers. I was going to read it anyway, but The Book Binge’s Shomi Spotlight (Holly has a review of Razor Girl, here) made me want to read it pronto. Then of course, my Powerpuff buddy, Katie, got it too then…here I am .

It’s the year 2036, six years after most of the world’s population has succumbed to the Super Flu. Few have survived, mostly children and the adults who were immune to the virus. And The Others, adults infested with a mutating string of the virus which turned them into zombies, mindless, slow, flesh eating creatures, out to eat the healthy survivors.

As the doors open,Molly has one mission: to go meet her father and help the rebuilding of the world. As she leaves the bunker, the first person she sees is her old sweetheart Chris Griffin, the geek boy who has loved her since they were children andwith whom she fell in love just before going into the shelter. Chase – as he is known now – lives with his brother Trey, and a few other survivors ( mostly children) at a Wal-Mart. They are happy to see each other alive and well,but there is still some underlying angst about the fact that Molly has stood him up the night they were set to leave town together without so much as a goodbye. Molly agrees to spend the night at their shelter and go on her way the next morning: she has no time to lose for Molly is a Razor Girl.

Based on her father’s favorite character out of the Book Neuromancer, Molly Millions, he has changed Molly as soon as the “apocalypse” started to enhance her chances of survival: her eyes have been replaced with ocular implants which allow her to see in the dark and which contains GPS instructions and other techie implements and under her fingernails there are retractable razors. Her tears ducts rerouted to her mouth – she can’t cry, she spits. She also has nano implants that make her stronger, faster but which have a short life span and her time is running, baby and she must go meet her father before she starts to break down.

But that night, one of the guys who had been bitten by an Other and was quarantined, escapes and now turned into a zombie, attacks the adults, killing Chase’s brother and only the children, Molly and Chase survive. Now they all must go to Disney World together – it is a dangerous mission in a dangerous post-apocalyptic world, populated with not only zombies but other crazed surviving humans. Not to mention the not so small fact that Chase has a drug addiction that will put them in danger sooner rather than later.

I am completely torn about this book. At one hand we have the interesting premise which although not extremely original, was still interesting to keep reading about. The thing that I loved the most and thought was really well done were the alternating chapters between the now – the post- apocalyptic world , the struggle for survival and the reunion of the two lovers – and the past with them falling in love for the first time and the virus starting to spread and how Molly became a Molly Millions. I loved their interaction; Chris was a rather sweet geek who truly loved Molly. And I thought the fact that Molly was a Molly Millions was very cool.

But somewhere towards the second half of the book, a few things started to bother me. It was hard to believe in the timeline of the story , to believe that only after six years mankind would decay to the point where some of the survivors would behave like animals and have gladiator-like festivals and the such. Call me naïve, I would like to believe it would take a bit longer than that.

A few things were off, like for example how her mother kills herself right in the first pages of the book and there is little to none reaction from Molly. And the language. Dear Lord, the language! Although it was fully appropriate for the age the characters had – first 15 and then 21- it felt dated and at some points it was cringe worthy. One good example, was when they were having sex and Chase was worrying that he would not last long (which is fair enough, they were basically teenagers who had never had sex before) and then he thinks “Pathetic much?”. Granted they are very young but I can’t allow myself to use that excuse, after I have read other fantastic YA novels, with very young protagonists, who sounded like their age without sounding like two escapees from “Dude Where is my Car”.

I think it would have been more effective if more time had passed – not only that would explain the complete decay of society’s laws but also would make the pair of protagonists a lit but older and therefore a lit bit more palatable for my tastes. Still, the fact itself these two are barely out of teenage years and are all that is left in the world is rather striking and quite possibly the whole point. That these two as kids, were thrown in the midst of so many responsibilities and had to make do without guidance from parents – it is a coming of age tale.

I could have lived with the all that though, but the plot went places I did not like after 2/3 of the book and all of the gloominess and the apocalyptical feel started to go away to be replaced with way too much cookie cutter happiness up to a very tidy ending and a couple of cop-outs that had me screaming at the book. ( a Molly Millions that can cry?? So why all the spitting references then? )

The book begins really well, with a dark edge and a sweet love story. Of course, I wanted a happy ending specially for Chris and Molly and with the hope of a cure in the distance for mankind . I did not expect a Welcome to Disney World Where Everything is Possible kind of ending though, with everything being so resolved it smelled of back tracking. Since the back cover compares the book with I am Legend I will go there and say it: it was just like the movie. Good premise, fantastic start, amazing realisation then from 2/3 onwards, chaos and mayhem in the plot and a cop-out ending. I am pretty sure others would like the book though; it was just not for me.

Notable quotes/ Parts: I can’t really quote anything as I had an ARC copy. But for me the best of the book, was the fact that the chapters alternated between past and present showing what was then and what is now. Very well done.

Additional Thoughts: Fellow Powerpuff girl, Katie(babs) has her own take on the book and I am sure she enjoyed it more than I did. Go check her review later today for a different opinion.

Verdict: it feels more like a YA novel than anything else. An interesting premise (the Disney Wold thing was genius) with a sweet love story, that others may find more appealing that I did. One thing is certain though, I will sure be reading more of the Shomi line.

Reading next: Caressed by Ice by Nalini Singh, which kicks off our Nalini Stravaganza from tomorrow!

Over at Kirkus: Summer of the Mariposas by Guadalupe Garcia Mccall