Hello, my name is Ana and I am a nalinisinghholic. My addiction started a bit late and only after I read Book 2, Visions of Heat. But from that moment on I was intrigued by the world-building, by the Psy-Changeling dynamics and above all I was completely captivated by the love stories within each novel. When I won a copy of the ARC for her new book, Hostage to Pleasure in a contest in her blog, I thought it was too much of an opportunity to pass – so I promptly asked if she wanted to do a chat with us and she said yes! (You will notice that I tried, as much as I could, to sneak in some spoilery questions but alas, she was on her guard.)

Here it is, so please say hello to Nalini Singh! 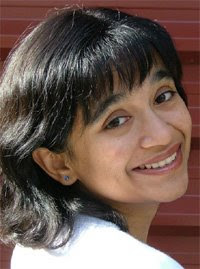 The Book Smugglers: Thanks for coming over Nalini. Your new book, Hostage to Pleasure is coming out next week. Can you give us a run down on what to expect?

Nalini Singh: Dorian has been an integral character in the series to date, and in HtP, we really get to see inside him. But it’s not only his story – it’s also Ashaya’s. Together, these two make a very intense couple, and the emotions in this book are strong, raw, no holds-barred.

The Book Smugglers: We have seen changelings portrayed in other series but your Psy race is pretty unique. In my mind I see it as a mix of Matrix and Minority Report mingled with a lot of computer knowledge – what were your inspiration sources to create it?

Nalini Singh: I’ve always been fascinated by psychic abilities as well as futuristic things, and one day, I started thinking – what if it wasn’t a gift, to, for example, be a telepath? What if the flip side to great mental ability was insanity of the worst kind? I can’t point to one thing that inspired me – I think it was more a case of a lifetime of interests coming together.

The Book Smugglers: In Visions of Heat we were introduced to the NetMind, a sentient part of the PsiNet that is all light and then learnt later on about the DarkMind, its dark counterpart. In Hostage To Pleasure , one word pops in very subtly that had my interest pricked: “Anthropomorphic” when they were talking about the NetMind. Do you ever plan to write a book about it? Will it ever become a living breathing character? (note: that would be so awesome).

Nalini Singh: Since the NetMind and DarkMind are linked so integrally to the flows of the PsyNet, the events of the series to date, and in the future, will have an impact. Will they ever become living entities? We’ll have to wait and see—the NetMind and DarkMind are both in the process of evolution – and you have to remember, their age is almost fathomless. Time doesn’t move with the same speed where they’re concerned.

The Book Smugglers: There is also a new denomination of Psy introduced in Hostage to Pleasure – a Traveler Psy. Vasic is a Psy working for the rebellion and I have to say I am very intrigued. Can you tell us more about him, will he become a protagonist?

Nalini Singh: Vasic is an interesting character, and one I definitely plan to develop. But it’s not time for his story yet – his story will, I think, come toward the second part of the overall series arc. Of course, he still has to survive the madness of what he does.

The Book Smugglers: Humans so far have played a minor part in your world building , this seems to be changing from the introduction to Clay’s human mate in Mine to Possess to the appearance of the Human Alliance in Hostage to Pleasure . Are they going to play a larger role from now on?

Nalini Singh: Yes, you’ll see more of the Alliance in particular in BRANDED BY FIRE – Mercy’s book. Things are slowly coming to a head, and all the players are sliding into position.

The Book Smugglers: On to the romance side of things which is where the heart of your books lies, in my opinion. You are a champion to portray the dynamics of a pack and the inner balance of the animal and the human and there is nothing more heartwarming to this reader than to see these alpha heroes completely wrapped up about their mates and how they are so protective while still reveling in their independence – a perfect combination and one that could easily have gone wrong – do you see yourself as a romance writer?

The Book Smugglers: The whole series seems to have a well-thought out arc that began in Slave to Sensation with the Psy and Changeling worlds coming to a stand off – do you have a clear idea of where this is all going? How many more books there will be?

Nalini Singh: I mentioned the series story arc above – I actually see it as a dual arc. Once part one is completed, part two can begin. So yes, I do know where the books are going, and what the end-point will be. However, I can’t tell you exactly how long it will take or over how many books. Each time I begin writing a book, I discover new aspects, new possibilities that I want to explore, so it’s not going to be a straight line to the finish – I see it more as a journey through different facets of the world, each integral to the climax.

The Book Smugglers: Now the question that everyone is dying to ask. Hawke, the Alpha wolf: is he ever getting his own book? Is Sienna going to be his mate????

Nalini Singh: Hawke is definitely getting his book, and you’ll get to see a whole lot of him in Mercy’s book as well. As for the second part of your question – you’ll have to wait and see 😉

The Book Smugglers: BRANDED BY FIRE is the next book in the series and it’s Mercy’s book. Chapter one was available with Hostage to Pleasure’s ARC and can I just say – I was very surprised at how hot it was – the sexing starts really early in the story contrary to the other books – that is a ballsy decision. Any info you can share? A release date perhaps?

Nalini Singh: Actually, the mass market of HOSTAGE TO PLEASURE will have an excerpt of ANGELS’ BLOOD – the start of my new series. We decided that after the ARCs were already printed. But since I know I might get pelted with rotten tomatoes if I don’t share a Mercy excerpt, the BRANDED BY FIRE chapter will be available on my website at the start of September.

As for what happens in the first chapter – it really was the only way the book could start given these particular characters. For example, in CARESSED BY ICE, the first love scene isn’t until a ways into the story. That’s because an early scene simply wouldn’t have fit who Judd and Brenna were. In the same way, Mercy and her hero are two dominant, wild, changelings. Getting physical (in more ways than one) is far more natural to them than holding back. It might be the hottest Psy/Changeling book to date – you guys will have to decide!

There’s no confirmed release date yet, but it’s been tentatively scheduled for July/Aug next year.

The Book Smugglers: You also have a new series coming up, unrelated to the Psy-Changeling world! Details please!

Nalini Singh: ANGELS’ BLOOD comes out March next year, and it’s about Elena, a vampire hunter who bags, tags and returns escapee vampires to their masters…the angels. These angels are dark, sexy, and more than a little dangerous. Raphael, the Archangel of New York, is the most dangerous of them all…and he wants Elena to do a job for him, a job that might just get her killed. But then again, failure isn’t an option. No one denies an Archangel.

It’s a darker, more edgy world, more urban fantasy romance than paranormal romance. However, it is still a romance – because as I said, that’s what I love to do. I’m really looking forward to seeing what readers think of this new world.

The Book Smugglers: And was it difficult to get away from the Psy-Changeling world?

Nalini Singh: They’re two such different worlds that no, it wasn’t hard. It’s more a case of using different sections of my writing muscles. And I like being able to switch between them – having different things to work on keeps my writing fresh I think.

The Book Smugglers: You live in NZ but your main market is the US – is it hard to conciliate such distance?

Nalini Singh: Not really, especially given the Internet. I feel very much part of the publishing world – I think being involved in blogging helps. I’ve met so many great people that way. Plus, I try to make the US conferences pretty regularly, so I get to see my editor and agent, as well of course, my readers.

The Book Smugglers: What are you reading right now (and revisions/edits do not count!)?

Nalini Singh: I’ve been on a bit of a reading binge and have recently finished Cry Wolf by Patricia Briggs, an ARC of New Blood by Gail Dayton, and Warrior by Angela Knight – all excellent. Last night I picked up Mistress Under Contract by Natalie Anderson and am really enjoying it.

The Book Smugglers: A naughty question – which piece of writing, of any genre, of any era are you most envious about and would like to have written yourself…

Nalini Singh: Hmm, what a difficult question! Not only do I devour books, I’m an English major who focused on Shakespeare and 17th to 19th century lit for the most part, so I’ve got centuries of writing to choose from! I don’t think I can choose just one piece, but I will say I’ve always loved Robert Frost’s Fire and Ice. It’s so clean, and yet says so much.

The Book Smugglers: I had other questions like who is the Ghost? Is Kaleb good or bad? Will we ever see a book for Amara? But I guess it would be way spoilery? LOL. So I guess this is it! Thanks so much for agreeing to take part in one of ours Chat with an Author!

Nalini Singh: You know you don’t really want me to answer those questions anyway *g* Thanks for inviting me to chat – I’m looking forward to learning all about being a Book Smuggler!

Nalini Singh is passionate about writing. Though she’s traveled as far afield as the deserts of China and the temples of Japan, it is the journey of the imagination that fascinates her the most. She’s beyond delighted to be able to follow her dream as a writer.Currently writing the USA Today & NYT Bestselling Psy/Changeling series, and with another exciting new series set to debut next year, Nalini lives in beautiful New Zealand. To find out more about her work,please visit her website at www.nalinisingh.com

So this is it, folks. We have a copy of Hostage to Pleasure to giveaway: all you have to do is leave a comment ! (Contest runs until Sunday noon.) 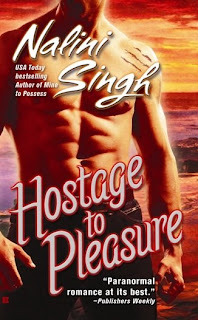