For this episode’s unearthings: the wonderful works of Christopher Pike!

Any other Christopher Pike fans in the house? Anyone that grew up in the 80s and 90s is familiar with a few key authors that wrote young adult series’. There’s “Francine Pascal” of Sweet Valley Twins fame. There’s R.L. Stine (and I’m talking BEFORE the Goosebumps phenomenon, with the Fear Street books). R.L. Stine has been called the Stephen King of young adult novels, but I beg to differ–if anyone deserves this title, it is the master of YA horror, Christopher Pike.

Christopher Pike is actually a pseudonym of Kevin McFadden–the inspiration for the pen name is from the original rejected pilot episode of Star Trek (OS), or you’ll recognize the name from episodes “The Menagerie” (I & II), as the unfortunate paralyzed and scarred captain with the cool wheelchair (my dad and I would affectionately name the aliens of Talos IV as “the buttheads“). 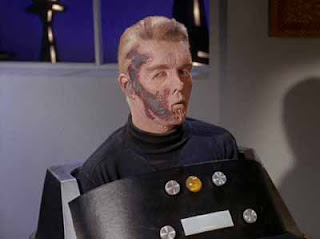 Beginning in the 6th grade (12 years old was a huge year for me and obsession building), I discovered this marvelous author and never looked back. It all began with Bury Me Deep. 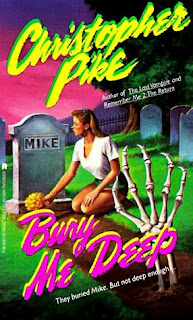 THE DEAD BOY WOULD NOT GO AWAY.
Jean is on her way to Hawaii for a week of fun in the sun. But the vacation gets off to a gruesome start. The boy sitting beside her on the plane suddenly chokes and dies. Jean tries to push the incident out of her mind when she arrives on the island, but that’s impossible. Part of the reason is because Mike keeps coming back to her in her dreams. Horrible dreams filled with cold blood.

Two of Jean’s friends are waiting for her in Hawaii — Mandy and Michele. They have already made friends with two young men who teach scuba diving at the hotel — Dave and Johnny. Jean and Johnny quickly become friends. But there are problems in paradise. Dave and Johnny have recently lost a partner in the ocean. No one knows how he died. No one can find his body. But then Jean finds Mike’s body. It isn’t where it’s supposed to be, and it seems as if it’s still got some life in it.

Ok, so this blurb reads a little cheesy. But I can guarantee you that this book is a stunner–filled with supernatural horror, as well as some good old fashioned ‘whodunit’ thrills. It is a ghost story, and a damn good one–upon a recent reread, it still stands the test of time.

Bury Me Deep was only the beginning–and while it is a great book, it’s by no means my favorite, or even one of the best.

I’m gonna make a big statement here and put it out in the universe–Christopher Pike is one of the most under-appreciated authors of our time. In my humble opinion, he has ideas that make Stephen King’s imagination look pale and meek in comparison (and this is big stuff from me as King is one of my favorite authors). Indeed, some of the newer YA paranormal/horror books ain’t got NOTHING on Christopher Pike. 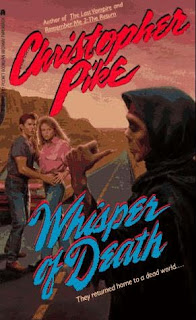 My favorite Pike book, and in my opinion the eeriest of the lot.

Returning home one day, Roxanne and Pepper find their small town–and surrounding towns–empty. Finally they find three other teens and realize that all five are each connected through the death of Betty Sue, the plain, shy girl who committed suicide only three months before. Betty Sue had written stories about them, stories of hate, revenge, and death . . . in a dead world.

This is a hefty story–of heartbreak and hate, but also one of hope and love ultimately. Roxanne narrates the story as a serious girl in a small town, who falls in love with a boy named Pepper. As fate would have it, Rox gets pregnant and she decides to have an abortion. After the procedure, however, Rox and Pepper return to a dead town–devoid of all life, except for three other people. And then, one by one, each dies a terrible death until Rox finally sees what she must do. This book is, in a word, atmospheric. It is poetic; it is terrifying. And it still is one of my favorites. On a sidenote, I used to be into the band Garbage, and the song “A Stroke of Luck” was my theme song for this book. I know it’s weird, but Shirley Manson’s growly voice over the track…it’s perfect for the atmosphere of the novel.

Lest you think Christopher Pike is a one-trick pony that only writes about high school kids with thriller aspects, let me assure you that this certainly is not the case. Mr. Pike is an extremely versatile author–covering the usual high school drama but in unexpected ways (fits of jealousy leading to death in Last Act, cocaine addiction and murder in Kill Me Softly, friendship, love and revenge in the Final Friends books), but also focusing on the mythological (The Immortal), monsters (Monster, The Last Vampire series), and heck even futuristic science fiction (The Tachyon Web, The Starlight Crystal). 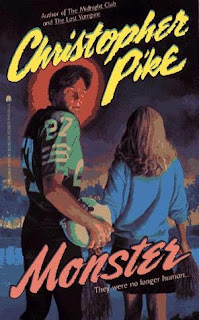 Monster has arguably one of the best opening scenes in a Young Adult novel ever.

It began with blood.

It would end the same way.

Mary proceeds to blow away the school’s linebacker and head cheerleader, only to be stopped from finishing her rampage by best friend Angela. As it turns out, Mary was right…an ancient evil has possessed them, and it hungers for human flesh. Angela finds out the hard way. 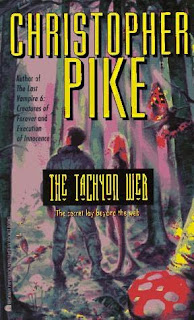 They did it for kicks.
Five young thrill seekers in a stolen spaceship on a joyride to the stars. But one of them had a more dangerous plan–to blast beyond the Tachyon Web, the iron boundary that barred mankind from the worlds beyond.

There they found danger, excitement and heart stopping adventure. And, on a strange alien world, one of them would also find love.

Oh how I love this science fiction story. The characters, the political intrigue, the romance…when I read Linnea Sinclair today I am reminded of my first foray into SFR with Christopher Pike. Eric has been rejected from the Academy–his lifelong dream to serve abruptly called to a halt. So, the responsible young man allows himself to go on a joyride with his more reckless friends, and they jump beyond the tachyon web–the web said to protect their planet from the threats that lay beyond. But instead of threats, they find a dying civilization, a peaceful people whose technology is far inferior to humanity’s…and these people have been left to die. With their ship damaged and low on the equivalent of coolant, they are forced to board the alien vessel, and Eric finds that his conscience cannot leave these people to die. Of course, a hot alien chick is part of the deal. 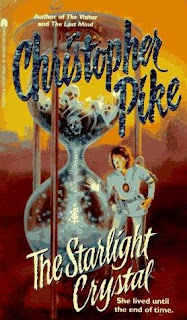 While on a spaceship that travels at near light speed, Paige Christian’s work is to study the changes on earth throughout two centuries; when a disaster befalls earth and she returns, she finds an unimaginable future.

Paige is given an incredible opportunity–to study humanity on board a time capsule of a spaceship. The Traveller circles the solar system at near light speed, and a day upon the ship is equivalent to 10 years on Earth–her mission is to study the changes for the equivalent of 200 years. But, something goes horribly wrong on Earth, and the crew of the Traveller are condemned to a future far beyond their initial mission date. This is a story of death and rebirth, and a journey of the human soul above all else. It is beautiful, it is haunting, it is one of the best stories I have ever had the pleasure of reading. Highly, highly recommended. 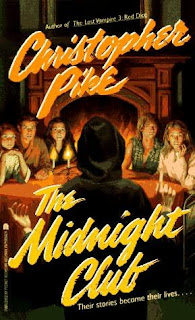 And, the last Pike book I will leave you with.

In a hospice for the terminally ill, five teenagers, who meet every night to tell each other scary stories, make a pact that the first of them to die must try to contact the others from beyond the grave.

This is the most emotional, the most raw of Pike’s work, in my opinion. Five teenagers wait for death, and they tell each other stories each night to pass the time. One member leaves the hospice to live their life, while another dies. And Ilonka remembers past lives glimpsed in dreams and memory, and a lost love that might not be lost after all. It is a story about hope, and love beyond death. This book made me cry for its tragic beauty. Again, highly recommended.

If you never had the pleasure of reading Christopher Pike, I beg of you, try to track down some of these titles. The books sell for dirt cheap on Amazon for all they are out of print, and they are priceless.