Posted on August 7, 2008
Thea: A week or so back, with the upcoming new release of Meljean Brook’s new novella, “Thicker Than Blood” in the First Blood anthology, I was talking with Ana about how I was excited to read this new short story.

Ana: I was so jealous of Thea for getting First Blood before I did, I decided to read another Meljean Brook novella. HA! I chose Paradise, in the Wild Thing anthology. We smugglers, can be so petty.

So…we present you with our own Fiesta de Meljean! 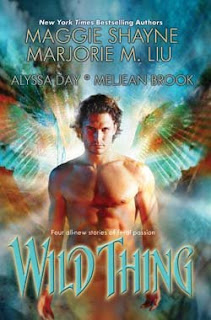 Stand alone or series: It can be read as a Stand Alone but it is a novella set in the Guardian’s world and the heroine appears in the other books as well.

Summary: Lucas Marsden has faced nosferatu before and survived, but he doesn’t know how to defeat the demon who hunts the vampires in his community…

But he knows exactly what he wants from the beautiful Guardian sent to protect them.

I confess I try to stay away from short stories and novellas as much as I can because I always, always feel that there is something missing and that there is no way a good story can be told in 100 pages. Paradise proved me wrong.

The story is set right after the events of Demon Angel. In DA, Lucifer lost a wager to Michael, the Ubber Guardian and the gates of hell have been closed for the next 500 years. Most demons are trapped inside hell but there are a few escapee ones that managed to get away before the impending closure and are now on the loose and the few remaining Guardians are out to get them.

Lucas Marsden is a nosferatu-born vampire, leader of the vampire community in Ashland, Oregon. He runs the Paradise theatre where most of his small community works. Olivia, his consort of 20 years was killed 2 months ago and unbeknown to him, that killing was only one of several killings that are linked. Selah is the Guardian sent to Oregon to investigate these killings: they suspect there is a demon behind them, trying to open a Gate to hell by sacrificing unwilling victims. The fact there is also a Gate to Caelum (the Guardians’ realm) in the same location that needs to be protected at all costs is even more worrisome. Selah and Lucas must work together to track the demon and they end up falling in love.

The search for the demon may be main thread that directs the plot and it is rather straight forward but Paradise is by no means reduced to it. There is an amazing amount of subtitles in the growing relationship between Selah and Lucas that goes beyond call of duty, a trait that is distinctively Meljean’s: the discovery of layer under layer of inner conflict, in this reader’s opinion, the best that there is.

Lucas is a vampire that has lived the past 20 years in guilt and shame – torn inside. Both he and his consort Olivia, had been transformed at the same time after an attack that also killed Olivia’s husband and Lucas’ best friend. They not only survived the attack but spent two decades having to live together, feed from each other and fuck every night in the throes of mindless bloodlust until she dies. The angst that emanates from Lucas at his memories from his time with Olivia is palpable. The fact that he refuses to feed from Selah the first time they have sex points to the fact that he wants, he needs to have her at least one time without the intense need that comes from the feeding so that he (and she) can know that there is a choice there.

Selah is one of the few Guardians with the Gift of teleportation. I have seen her making appearances in Demon Angel, Demon Moon and Demon Night but I had never known the depths of her commitment to the Guardian’s pledge. A commitment that is deep and embedded in her soul and in her every cell. It may seem at first that she is a single-minded woman but there is warmth and there is questioning inside her: is there more to her life?

One particular scene is a particularly remarkable example of how the writer ties up every single aspect of the story (body, mind, soul, plot) in a mind-blowing fashion: Selah and Lucas are attacked and she teleports to the safety of her apartment in Caelum. There, they sit to talk. Lucas starts massaging her foot and as the physical contact escalates so does the conversation to a point where Selah tells everything and opens to Lucas and to reader: she is not perfect which is just as well for Lucas. And being with him is better than anything else – it is the something more she craves.

I am impressed at how in only about 100 pages or so, so much has been packed. Here I am writing an essay when I had promised myself I would stick to 3-4 paragraphs tops but Meljean Brook’s writing and her characters just happen to touch the right buttons in this reader’s mind. And I haven’t even mentioned how the opening page and the finishing paragragh are amazing or that Lilith, Hugh, Michael and Colin all show up for the fiesta. 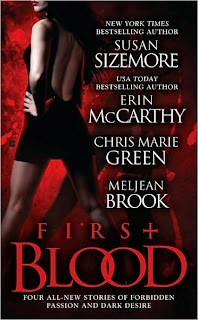 Stand alone or series: Stand alone novella, but set in the Guardians universe, with one particular familiar face

Summary: (from MeljeanBrook.com)
Annie Gallagher is the only survivor of a demon attack that exterminated every other vampire in her city. But she can’t leave before she finds Cricket, a young human girl whose vampire guardians have been killed. Annie needs help, but the rules of her kind demand that she operate in secrecy.

And when help comes, it’s from the one man she never expected…

A full excerpt of Chapter One is online HERE

I’m always a little leery of reading novellas, especially for authors whose longer fiction I enjoy. Novellas and novels are different beasts entirely, and it’s no easy feat to effectively do both. Kinda like sprinters versus long distance runners. Or a wild one night shot on the town versus a long weekend in Vegas. Pacing, my friends, is everything. So it was with anxious hope I purchased First Blood, and immediately flipped to Meljean’s story, “Thicker Than Blood”. And I liked it. I liked it a lot.

The novella opens with Annie Gallagher, vampire, haunted, and sweating in the shadows outside a Philly pizza parlor. Plagued by the phantoms of memory–of her family and her mortal life, and of food she can never taste again–she lurks, hungry and ashamed, waiting for a suitable mark to leave the parlor. Then he leaves–a man with the reddish brown hair that reminds Annie so much of her old love. She can smell that he’s been drinking, but not drunk, and follows him to his home. Again she waits in the shadows, waiting for him to fall asleep before she enters his home, ready to tranquilize him, and then feed. But when she enters, the man is not asleep–and he has a gun pointed at her. It is then that Annie realizes that this is not just a man that vaguely reminds her of her old flame–it is him. Jack Harrington. And he thinks Annie is dead and gone.

Jack, shocked to his core to see that Annie–though she seems changed somehow–is alive, follows her and vows not to lose her again. And Annie reluctantly realizes that she needs his help, no matter how much it pains her to be around the man she still loves but cannot have.

Something sinister has been happening in Philadelphia–leaving Annie the only vampire left standing in the city. The nephilim have been threatening and killing her kind, leaving one young human girl, Cricket, alone, hunted, and without anywhere to turn for help. Annie alone has tried to find her, but to no avail–and without other vampires to feed from, she had resorted to alternating ‘boxed’ blood with sleeping humans. Jack, former FBI poster boy, who knows that something strange and supernatural has been going on in his city, is now Annie’s last hope to find the missing girl.

Of course, there’s always help from other avenues–Guardians, and a certain ex-halfling who has played a role in Annie’s life and rebirth as a vampire.

Just writing this brief plot summary, you can see there’s a lot going on. As with Meljean’s other books, the story can be read alone, although there are references and tie-ins to her other Guardian works. “Thicker Than Blood” is a wonderful novella, with strong characters, an intriguing plot, and–of course–a good dose of blood and sex to boot. Annie, as a former E.R. nurse turned vampire warrior, is surprisingly tender-hearted, and a heroine I found myself genuinely caring for. Jack also is fully fleshed out and authentic in his emotional attachment to Annie, even after he finds out that her family has lied to him about her death. His gradual realization of what Annie is, without pushing her or demanding her for answers, was something handled beautifully–the relationship between these two characters is not only sexually charged, but poignant in terms of emotions as well. Even in these few chapters, the heartache that both characters suffered being apart for the past five years, and their immediate wonder and hope at reconnecting is touching.

There was hunger in her voice. It sparked his own need and gave him hope. “Will you come with me?”

“But you came in before.”

“I didn’t know it was you.” She indicated his body with a sweep of her hand, then the neighborhood. “Everything said it wasn’t you.”

It was true. He looked like warmed-over shit. Self-consciously, he smoothed his palm over his hair, and something softened in her eyes.

“You don’t have to–” She broke off, drew in a breath through barely parted lips. “You look good.”

“You look incredible.” He watched pleasure and regret flash over her features. Her expressions were still so familiar; he could still read her so easily. How many times had he seen other women–a quirk of their eyebrows, a movement, heard a laugh–and be struck by memories of Annie?

Had she done the same?

And, as I have come to expect, the plot of this story is nicely developed and multi-faceted, involving vampires, nephilim, Guardians, and my favorite character of them all–the wickedly delicious Lilith. Who, apparently, has in the past played an integral role in the lives of both Annie and Jack, and will continue to play a role in their future.

So, what more is there to say? This novella covers it all–from the pain and hope of love lost and found again to the ties of family. The story of Annie’s transformation from human to vampire and her family’s reaction is heart-wrenching. And yet, despite earlier tragedy, Annie remains tied to her loving mother and brother. This concept of family and trust, be it Annie’s old family from blood ties or the newer bond with Jack and Cricket, is a strong theme in this story.

I thoroughly enjoyed this suspenseful, emotional novella, and finished it with a smile on my face. It is touching and sweet, but with a harder edge that keeps it from being sappy. I cannot wait to read more! Any plans for more Annie, Jack and Cricket? Pretty please?

Reading Next: The King’s Favorite by Susan Holloway Scott