This month, we will release our very first Quarterly Almanac–a brand new quarterly venture from Book Smugglers Publishing, in which we publish original fiction, select reprints, and incisive nonfiction essays and reviews. One of the original short stories we are publishing in our inaugural Almanac is Medium by Charles Payseur–a powerful superhero tale about a young man who can channel and use the energies of ghosts, and who learns about his powers. Today, Charles tells us a little bit about the Inspirations & Influences behind the story.

Please give a warm welcome to Charles!

When I was a teen I thought I could write comic books (not, like, ever, but right then, as a teen). I was a bit of a little shit so I thought that it was as easy as deciding to do it. Like what I thought of writing in general, young me just assumed as long as I wanted a thing I would get it. Young me had a lot to learn. But young me did create a fair number of superheroes and stories. Even tried to draw a couple (it’s sad when you know your drawing peaked at age 15). I still have most of them. And one was the Shadow Walker. He got his powers in a lab explosion. He could channel ghosts into energy. He was awesome. And in some ways “Medium” was me revisiting that particular chapter in my writing and drawing it out, examining what I thought a superhero was at the time and how I have changed since then. And kind of finding out that while the Shadow Walker was still kinda awesome, he was also really rather terrible as well.

I’ve had discussions with people before about turning a critical eye on nostalgia. Normally I am told I am over-analyzing or perhaps there is an exasperated sigh and the inevitable question of “Why can’t it just be fun?” Nostalgia is a strange thing. And a dangerous thing when left unexamined. Why things seem comforting when viewed through the rose-tinted glasses of time is something that I find fascinating. Also normally depressing, because I was a little shit and liked a great many things completely ignorant of what they were promoting and teaching me. But as I enjoy introspection, the fascination normally wins out. And regardless of how uncomfortable it can be to pull open a box of the past and find a vision of yourself you don’t like, it also seems rather necessary to learn from your own experiences.

I think some of what people like about superheroes is that they boil down the world to good and evil. Evil wears a suit and tries to do Bad Things. Good wears a suit and tries to stop them. With great power comes great responsibility. But the responsibility typically extends only to fighting crime. Stopping Bad Guys. Any shittiness present in the hero is just part of what makes them complex. Or gritty. If he says misogynist things or just so happens to destroy huge swathes of cities while trying to save people, then he must be forgiven, because at least he’s not a supervillain. And if he sucks up the dead and transforms them into energy in order to Do Good, then isn’t it worth it? Isn’t he still a hero?

Young me obviously had no problem with this guy fueling up at graveyards to fight against evildoers. And I admit now that it makes for an interesting aesthetic and probably there are video games that use that very mechanic (though I cannot think of any right now). It’s like a Spawn knockoff where the dead are all faceless and useful only as ass-kicking fuel. But that is rather fucked up. Rather really fucked up. It comes back to the ideas of power and responsibility. The idea of great power is all out of whack, as it centers evil as “cartoonishly evil” and “great power” as “the ability to punch through a steal beam or blow things up with your mind.” People are taught that any lesser manifestation of power needs no consideration because the heroes before their transformations were all the lowest of the low, the most vulnerable and powerless: straight white adolescent cis-males.

Now I ping for most of those categories, so perhaps it’s not a great surprise that I would love superhero stories and that I would come up with an idea like the Shadow Walker. And “Medium” is probably more than a little bit me realizing that I’ve had a number of really shitty ideas in the past. I wanted to be a kind of superhero, one that told stories. And in my little boy heart it meant only Doing Good in the sense of being entertaining. Just fun, right? I wanted that great power of a super-popular writer (Jordan or Gaiman or Martin) because voices like Reagan’s from the story insist it’s as simple as that. Not that I can’t try to do good (and not that super-popular writers don’t Do Good), but that I have to recognize the harm I cause and try to Be Good instead of merely trying to Do Good. That sitting back and refusing to examine past and present harm does not actually undo it. That letting off superhero stories from the past because they’re “Just for fun” or “people didn’t know better” is no excuse, because we can do better now. We can work to write a better narrative.

So the story came out of a lot of my weird feelings about superheroes and about writing and about being a rather ignorant young person and about nostalgia. It’s painful to look back, really, and see just what stories I came up with, and how harmful they would have been if I had the great power I had wanted. But I think it’s something that needs to be examined. I can ignore it and move on without really thinking about it, or I can make sure I learn from it. Learn to be better. To try better, and to not ignore the harm I cause.

And the story was also an excuse to build up a superhero team that was mostly made up from ideas I had as a young person but make them, well…interesting. To take the “this is so cool” aspect of the characters that young me loved and complicate them. Plus add in some Star Trek love and ghosts and a ridiculous supervillain. I would love to write more stories exploring the rest of the team, but I’m not sure that’s in the cards any time soon. 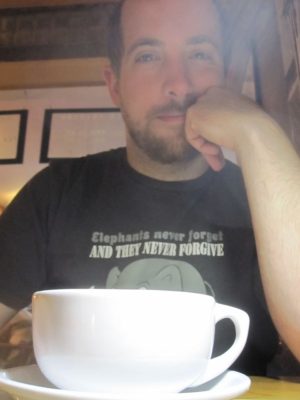 Charles Payseur currently resides in Wisconsin, where his partner, a gaggle of pets, and more craft beer than is strictly healthy help him through the long winters. His work has appeared at Strange Horizons, Nightmare Magazine and in Lightspeed Magazine’s “Queer’s Destroy Science Fiction,” among others. You can find him on Twitter as @ClowderofTwo and can find more about him at his website, Quick Sip Reviews (www.quicksipreviews.blogspot.com).

“Medium” is one of the original short stories available on The Book Smugglers’ Quarterly Almanac, out June 21.

A Smugglerific Cover: The Long And Silent Ever After (Spindle City Mysteries #3) by Carlie St. George

Avi Cantor Has Six Months To Live by Sacha Lamb