SFF in Conversation – Foz Meadows and Coral Bones: Being Genderqueer

Today, are delighted to host writer and SpecFic 15 editor Foz Meadows to talk about her novella Coral Bones and being genderqueer. 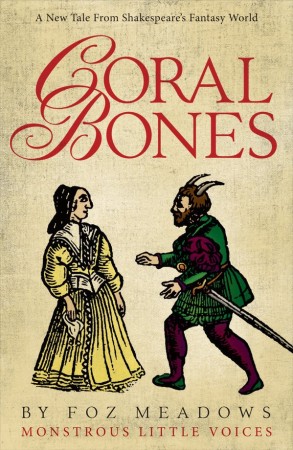 In late March last year, my wonderful agent emailed to say that Rebellion Publishing was putting together an anthology of Shakespearean fantasy novellas – was I interested in throwing my hat in the ring? I said I was, and ended up in contact with editor David Thomas Moore. We emailed back and forth about possible themes, Dave accepted me for the project, and I started to think about the sort of story I wanted to tell.

In April, at the age of twenty-nine, I realised I was genderqueer.

In early May, Dave set up a private Facebook group where all of his authors – myself, Emma Newman, Kate Heartfield, Johnathan Barnes and Adrian Tchaikovsky – could meet to discuss our ideas with him. It was a great experience: Dave set the parameters for faerie magic, chronology and worldbuilding that would be common across our stories, we all asked questions, and together, we figured out who’d be writing what. From the outset, I was drawn to the idea of writing about Miranda. I’ve always been a fan of The Tempest, but while Shakespeare’s plays contain any number of powerful, impressive, complex female characters, Miranda isn’t one of them – not because the potential isn’t there, but because she was deliberately written as the personification of feminine virtue and modesty, a literal ideal, instead of being more realistically defined by her (rather unique) context.

As a child, whenever my mother finished reading me a bedtime story, my default response was to look at her and ask, “What happens next?”. It’s a question which, even now, I consider foundational to both myself and my writing, and as such, I couldn’t help but ask it of Miranda. What happens when a girl who’s grown up alone, in ignorance of her heritage, is forced to survive politically at court? What happens to a sixteen-year-old who marries the first non-family member they ever meet? What happens if performing gender roles is easy without an audience, but difficult when they’re expected every day? What happens if a happy ending isn’t so happy after all?

What might someone raised by a shapeshifting spirit really think of gender?

The end result was Coral Bones – a novella about Miranda, faeries and gender identity. Fuelled jointly by my historical love of Shakespeare and my still-recent (or recently recognised) genderqueerness, Coral Bones is, if not the most personal thing I’ve ever written, certainly the most personal thing I’ve yet had published. Writing it was cathartic in a way I didn’t expect, and as such, I’m overwhelmingly grateful to Monstrous Little Voices and Dave Moore for prompting me to do so.

It’s a weird thing, realising such a fundamental aspect of yourself so belatedly; like you’re past the halfway point of a movie that’s been dropping increasingly unsubtle hints about the endgame from minute one, and you’ve only just cottoned onto them. Even now, I’m still blindsided by the occasional flashback that makes so much more sense in the context of my being genderqueer than it ever did at the time. I was always called a tomboy, which feels now like an obfuscating term, in the sense that it provided a superficial and ultimately inaccurate description for what I was; but then, what other explanation was available? With the twenty-twenty vision of hindsight – and armed with a more accurate, more inclusive language of queerness – the conclusion seems obvious; yet even so, it took a long while after I first heard the term for that lightbulb moment to happen. Easy enough to apply a new word to someone else, or to learn it in theory; harder still to consider that it might have personal relevance, especially when you’ve spent the better part of three decades assuming all the pertinent evidence to that effect is either a human universal or a quirk exclusive to you.

The Miranda of Coral Bones isn’t exactly me – contextually, that would be impossible – but in terms of gender, I’ve drawn on my own experience in order to create hers. As challenging as it was to try and homage Shakespeare’s distinctive voice – contemporary at the time of writing, yet undeniably poetic – with my own combination of contemporary and poetic language, getting Miranda right was harder still. But if that aspect of the story resonates with even one reader, then I’ll consider it well worth the effort.

As Miranda famously says herself, ‘O brave new world, that has such people in’t!’. There’s a lesson there, if we choose to see it. The world is full of different people, and if we haven’t met them all yet, that doesn’t mean they’re strange or implausible; just that we’ve been living on an island. 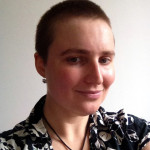 Foz Meadows is a genderqueer author, blogger, essayist, reviewer and poet. In 2014, she was nominated for a Hugo Award for Best Fan Writer for her blog, Shattersnipe; she is also a contributing writer for The Huffington Post and Black Gate, and a contributing reviewer for A Dribble of Ink, Strange Horizons and Tor.com.
You can find Foz online at /her website: fozmeadows.wordpress.com, and on Twitter @fozmeadows.

SFF in Conversation – Mahvesh Murad: Diversity is a Tricky Word

SFF in Conversation: R.J. Anderson on Diversity in Speculative Fiction

SFF in Conversation: Athena Andreadis on “Lest We Forget: In the Wake of This Year’s Nebula Awards”