On October 27 (tomorrow!) we will publish The Bridegroom by Amelia Mangan–the first Horror short story in our Halloween Tales – in what we hope will be an annual event taking place during Halloween Week. Today, Amelia Mangan is here to talk about the inspiration behind this unsettling story. 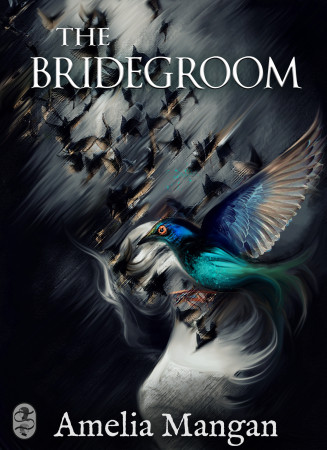 Give a warm welcome to Amelia Mangan, everyone!

I didn’t know I was going to write The Bridegroom. Not at first. At the urging of a friend, I’d determined to write something for this site’s “First Contact” story call, and spent weeks trying to come up with an idea that both really spoke to me and would, I hoped, be a somewhat original take on the theme. I’d just about given up when, drifting off to sleep one night not long before the deadline, The Bridegroom popped into my head, more or less fully-formed, and lodged there until I’d finished the first draft.

I’ve long been drawn to characters who turn inward, who, having grown isolated almost to the point of becoming feral, create private worlds filled with arcane symbols and signifiers – Merricat Blackwood of We Have Always Lived in the Castle, Fuchsia Groan of Gormenghast, Frank Cauldhame of The Wasp Factory. The heroine of The Bridegroom, Valentine, owes something to all these characters, and to Connie, the hesitant, yearning lead of Joyce Carol Oates’ classic story, “Where Are You Going, Where Have You Been?” (Oates being my favorite author, her influence on this story, and pretty much everything else I’ve ever written, cannot be overestimated.)

The mysterious Uncle George’s roots run a lot deeper: I deliberately conceived him as an embodiment of the Demon Lover archetype, the stranger who comes to take you away from all you have known. This figure exists in every culture: he’s the Erlking, the Pied Piper, the Boogeyman. He lives in recorded myth and legend, and probably goes back even further than that, to some prehistoric icon embedded in our collective lizard-brain. Whatever you most fear, want, and fear to want, that’s what Uncle George is.

For a short story, The Bridegroom has a fairly large number of forebears. Anna Kavan’s Ice was a big influence on the manner in which Valentine’s environment changes around her; the novel, one of the twentieth century’s great forgotten works of surrealist SF, revolves around a plague of (yes) ice that sweeps through an unnamed country, reflecting the disintegrating relationships at the book’s heart. Ithell Colquhoun’s Goose of Hermogenes, a Gothic, tarot-inflected variation on The Tempest, overflowing with Medieval occult symbolism and troubling incestuous undertones, is also in the mix. And there’s certainly a touch of Poe’s “Masque of the Red Death” in there, too. (Also, Valentine’s attic bedroom is absolutely a shout-out to VC Andrews.)

Being a story with a strong visual bent, art and cinema also played a large role in influencing The Bridegroom. Mercedes Helnwein’s magnificent 2012 series “Make It Dark” – a strange and unsettling collection of drawings depicting teenage girls engaged in private, indecipherable rituals – influenced The Bridegroom a great deal. Likewise, David Inshaw’s “The Raven” (1971) and Will Barnet’s “Silent Seasons” quartet (1967), with their withdrawn, solitary young women in contemplation of a stark and vaguely ominous natural world.

In terms of film, the strongest influence on the story’s mood and atmosphere was Last Year at Marienbad (1961), a sparkling, bejeweled puzzle-box of a film, and one that will, to paraphrase John Waters, get you punched in the mouth if you recommend it to people whose tastes you don’t know very, very well. The Night of the Hunter (1955) – one of my favorite films, overall – played a large part, too, in its invocation of Nature as an observant character in its own right, and the menacing masculine figure at the story’s heart. Hitchcock’s 1943 Shadow of a Doubt (and Park Chan-wook’s brilliant, fever-dream 2013 reimagining, Stoker) played a very large role in the conception of the story; I’ve glibly referred to The Bridegroom as “Shadow of a Doubt if Uncle Charlie were Nyarlathotep”, and hopefully it at least halfway lives up to that description.

This, then, is the bloodline of The Bridegroom: long, tangled, and full of isolation, longing, deviance and madness. What prouder lineage could one have?

The Bridegroom will be published officially on October 27, 2015. You’ll be able to read the story in full for free here on The Book Smugglers, but we’ll also have a DRM-free ebook (EPUB & MOBI) that contains the story, a Q&A and an essay from the author, as well as fun extra materials about the series available for purchase on all major ebook retail sites.

Add the book on Goodreads, and read The Bridegroom for free online on October 27, 2015.

The Vishakanya’s Choice by Roshani Chokshi