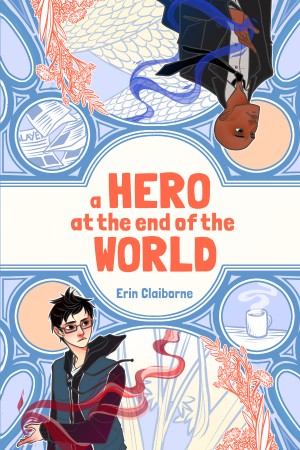 Title: A Hero at the End of the World

Sixteen year-old Ewan Mao knows one thing for certain: according to prophecy, it’s his destiny to kill the evil tyrant whose dark reign has terrorized Britain. Although he’s just a normal boy, deep down Ewan is confident that he has exactly what it takes to be a hero. But when Ewan’s big moment comes, he freezes. His best friend, the clever and talented Oliver Abrams, defeats the villain for him, and Ewan’s bright future crumbles before his eyes.

Five years later, Oliver has a job as an Unusual in the government’s Serious Magical Crimes Agency, the life he and Ewan always dreamed of. But a routine investigation leads him and his partner, Sophie Stuart, to uncover a dangerous and powerful cult… one that seems to have drawn his former best friend into a plot to end the world.

A deftly plotted, hysterically funny take on Chosen One narratives, A Hero at the End of the World expertly walks the fine line between satire and sincerity. Its sensitive depiction of a broken friendship and wry take-down of unfairly great expectations will appeal to all readers of modern fantasy.

There is no better way to start a review of this particular book than to use a gif. More specifically this one:

Erin Claiborne’s A Hero at the End of the World is Big Bang Press’ – a new press with a mission to publish diverse, original fiction from fan fiction writers – first book, one that starts their publishing venture with (warning: inevitable pun ahead) a bang.

The road to heroism is not as straightforward as many books would have you believe.

The story follows former best friends Ewan Mao and Oliver Abrams after the latter becomes the hero that the former should have been. There was a prophecy that foretold that Ewan would one day defeat the equivalent to a Dark Lord in this world. A prophecy that followed him whenever he went and which allowed him to live a sort-of blessed life of fame, entitlement and enabling behaviour. But when the time came to actually defeat the Dark Lord, Ewan froze and his best friend Oliver became the de-facto hero.

Five years later, the two no longer speak, Oliver is the insufferable darling of the magical world and Ewan spends his life in bitter obscurity. But then he is offered another chance, a chance to prove to the world and to Oliver that he is a hero, that he can do things – if only he defeats yet another Dark Lord. All of a sudden, we have two heroes and they are both standing together (and might be both culpable) as the end of the world rushes at them.

A Hero at the End of the World is a hilarious, self-aware (and self-deprecating) novel that takes a look at Chosen One narratives, at the heroes who live in the shadows of their destiny and what, if you follow that premise to its inevitable conclusion, living under the weight of those expectations can do to a person. It’s a mixture of Fantasy, silly adventure (jumping through alternate dimensions IS THE BEST) and romance (both het and LGBT) featuring two protagonists of colour in what I can only describe as a Satirical Romp With Feels. Oh the feels – the romance between Ewan and Archie (the scarf-wearing rich snob that falls hard for Ewan) is both heart-warming and hilarious in the best possible way.

The most striking thing about A Hero at the End of the World though is how contemporary it feels. Both in the way that it engages with current online conversations and fandom and how it interacts with a type of creativity that is as thought-provoking as it is emotionally engaging. Sometimes it felt as though I was reading something directly out of my Tumblr dashboard, something that somehow manages to be both satirical and loving of the very thing that is satirising.

If there are a couple of criticisms to be made: I would have liked to see the female characters portrayed with the same loving depth dedicated to the male characters; some of the chapters needed a tighter transition; and the bridging of the broken relationship between Ewan and Oliver felt two rushed. So basically what I am saying is in fact: I wish there was more of the book because what we have here is this pure, undiluted, amazeballs joyful story that was such a pleasure to read.

Seventeen-year-old Ewan Mao waited outside the great hall of the man he was destined to kill, wondering if his best friend was still alive.

His knees were shaking. He had a terrible burbling sensation in his stomach, and when he wiggled his toes in his trainers, mud squelched between them. His school tie had been lost somewhere between the antechamber and here, where Duff Slan had retreated after the fall of his last minion.

The only thing now separating Ewan and Slan was a heavy wooden door. Slan had to be tearing Oliver to pieces, judging from the screams and occasional thuds coming from inside. Yet Ewan stayed where he was, too terrified to move.

Ewan had meant to go in first, but then one of Slan’s minions had appeared out of nowhere and attacked him with a spell that had rent the air with a sharp crack and left him lying on his back next to a nearly headless statue. Oliver had left Ewan behind; he’d still been crouched on the ground as Oliver had charged past. Ewan had hidden behind a suit of armor until he could work up the nerve to do a banishing spell, sealing off the corridor after they’d left it. But even then he couldn’t bring himself to go inside. He’d been out here for almost half an hour.

It was time to go in, he told himself. He had to save Oliver from evil.

Ewan sucked in a deep, calming breath, clutching the carving knife he had brought with him. He had already used it twice today to give his paltry powers a slight boost, but all he needed was enough magic to wage a surprise attack.

His whole life had been leading up to this. He was ready. So what if his years of training had never prepared him for the actual reality of coming face to face with a dark lord? Slan had always been an abstract concept—he was someone Ewan had seen on TV and in the papers, his portrait in every house, office, shop, and school in the United Kingdom—but the prophecy had made it clear: Ewan Mao was the slayer of Duff Slan, and this was what he was meant to do. It was his destiny.

Now he was finally going to meet him face to face.

So long as he could still channel magic, he could do this. He knew his normal abilities wouldn’t be a match for Slan’s, and his totem might already have tapped the limit of how much power he could take in at once. But as long as Slan, too, had already drained himself and the totems of everyone around him like a pack of cheap batteries… and had hopefully sustained some sort of crippling head injury… and so long as Ewan didn’t pass out the moment he saw his face in person…

“Get on with it,” he muttered angrily to himself.

Slowly, Ewan put a trembling hand on the door separating the great hall from the rest of the castle. It emitted a long, deep moan as he pushed it open. The sound reverberated through his chest. When there was enough room for him to slip inside, he stopped. There was no sound at all coming from the other side.

Bravely, he stepped into the darkness, right smack into— “Hey,” said Oliver, steadying Ewan with a hand on his shoulder. Ewan screamed. The knife in his hands clattered to the floor.

His heart battered against his ribs. “Are you—” Ewan asked, voice shaking. “Did he—?”

“It’s okay,” Oliver assured him. He gestured to a motionless lump on the floor on the other side of the enormous room— lair? Was lair the more appropriate word? Ewan didn’t know the best terms to use when dealing with evil. “I killed him.”

One good look confirmed that it was most certainly Duff Slan there on the floor, his mouth curled open in a scream, his massive body twisted in an unnatural arc. Half the furniture in the hall was upturned, a broadsword was sticking out of an altar, and it looked as though a portrait of Slan had been taken down and smashed over someone’s head. All four of the great medieval tapestries had crumpled to the floor, revealing dark wooden paneling that matched the beams in the steepled ceiling. There was something that looked like a puddle of vomit beside the throne, which had once been leafed with gold and jewels and was now blackened by a fire conjuration.

Ewan didn’t know what he was feeling. “Oh,” he repeated.

There was a long cut along Oliver’s cheek, and it looked as if his nose had been broken, but otherwise he seemed okay. He certainly sounded okay. “I waited for you, but…”

Oliver glanced down at his once-pristine jumper, which was now covered in muck and blood. His brow furrowed. “Bloody great. This is never going to come out.”

“Um, sorry to bring this up, but… well… you do know the prophecy said that I was supposed to kill him?” Ewan asked. “You know, Ewan Mao, the slayer of Duff Slan?”

“Yeah, but you were taking too long,” Oliver said, shrugging, and Ewan bit back a sudden rush of anger. “Sorry, mate. You can get the next one.”

“But I’m the slayer of Duff Slan,” Ewan repeated, his voice growing louder. “Remember, On his seventeenth birthday, the boy born in Chiswick…”

An annoyed look crossed Oliver’s face. “I said I was sorry. It’s not like I can go back in time and un-kill him.”

Well, he could, but they hadn’t learned that spell yet. That sort of thing was university-level.

“No, I mean, of—of course not,” Ewan stammered.

Oliver gave him a friendly slap on the shoulder. “Then what’s the problem?”

His palm had left a smear of blood on Ewan’s jumper. Ewan stared at it. His stomach roiled.