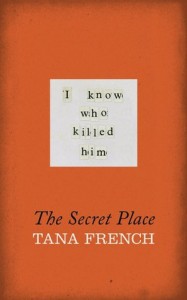 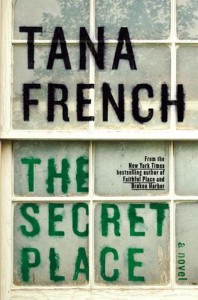 The photo on the card shows a boy who was found murdered, a year ago, on the grounds of a girls’ boarding school in the leafy suburbs of Dublin. The caption says, I KNOW WHO KILLED HIM.

Detective Stephen Moran has been waiting for his chance to get a foot in the door of Dublin’s Murder Squad—and one morning, sixteen-year-old Holly Mackey brings him this photo. The Secret Place, a board where the girls at St. Kilda’s School can pin up their secrets anonymously, is normally a mishmash of gossip and covert cruelty, but today someone has used it to reignite the stalled investigation into the murder of handsome, popular Chris Harper. Stephen joins forces with the abrasive Detective Antoinette Conway to find out who and why.

But everything they discover leads them back to Holly’s close-knit group of friends and their fierce enemies, a rival clique—and to the tangled web of relationships that bound all the girls to Chris Harper. Every step in their direction turns up the pressure. Antoinette Conway is already suspicious of Stephen’s links to the Mackey family. St. Kilda’s will go a long way to keep murder outside their walls. Holly’s father, Detective Frank Mackey, is circling, ready to pounce if any of the new evidence points toward his daughter. And the private underworld of teenage girls can be more mysterious and more dangerous than either of the detectives imagined.

The Secret Place is a powerful, haunting exploration of friendship and loyalty, and a gripping addition to the Dublin Murder Squad series.

Stand alone or series: Can be read as a standalone novel but is book 5 of related-but-not-sequels Dublin Murder Squad series

Why did I read this book: I had never heard of Tana French (I KNOW) but then I got an awesome pitch for this book – I was sent an ARC with a note saying how awesome it was and to keep an eye out for page 187. It worked and I got curious.

It’s going to be difficult to cover everything about this book but here is a good starting point: The Secret Place blew my mind. It’s the fifth book in Tana French’s ongoing Dublin Murder Squad series but my first Tana French book altogether [1. I KNOW].

It’s been one year since popular teenage boy Chris Harper was found murdered on the grounds of the posh St. Kilda’s, a girl’s boarding school in the suburbs of Dublin and the case has gone cold. One morning, one of St Kilda’s students, sixteen-year-old Holly Mackey (the daughter of a recurring character, Frank Mackey) walks into Stephen Moran’s office bringing him a photo of Chris with the caption I KNOW WHO KILLED HIM.

Holly found the photo pinned up at St Kilda’s School’s Secret Place, a board where the girls can pin up their unspoken secrets and fears anonymously. Stephen, a minor character from Faithful Place, who had being working cold cases, sees this as an opportunity to move to the Murder Squad, partnering up with hardened murder Detective Antoinette Conway to reopen the case.

Determining the time that the photo is likely to have been posted is but the first step and then everything leads them back to two different groups of girls, one of them Holly’s own close-knit group of friends.

Set in the grounds of St Kilda’s for the duration of one day, the narrative is mostly from Stephen’s viewpoint but interspersed by flashbacks of Holly’s group leading up to the murder. The novel’s progression divided as it is in this dual narrative timeline is incredibly, fantastically tense and richly layered.

Because despite how the murder case in itself is actually pretty good, The Secret Place is in fact, a brilliant, astute psychological study taking place against a backdrop of patriarchy, misogyny, class differences and more.

The girls of St Kilda’s, specially the two main groups of girls, are deftly characterised with sympathy and compassion, their arcs engaging thoughtfully with prejudice and stereotypical notions of girlhood. Most of them think of, engage with, react to, the way that our society expects girls to behave – some of them absorb and internalise these notions, some of them actively question those roles. Friendship that are close-knit, dependable, life-saving are central to this story. Another strong focus is the harmful, negative way with which those notions affect teenage lives – both boys and girls.

One of the most effective ways of presenting all of this is by showing not only their inner lives and internal monologues as unique to each girl but also by providing a counterpoint with the way that Stephen engages them. He is very astute and observant but at times, also extremely biased and judgemental. A telling moment is when he is first interviewing the girls and his attempts at pining them all down by comparing them all to girls he met before when he was a teenager. Needless to say, this does not work that well for Stephen. That judgemental side of him also almost ruins his budding partnership with Detective Conway.

The interesting dynamics between the two detectives and how their relationship progresses from uneasy partnership to a point where they can rely on each other is another strong focus of the plot and equally well, awesome. Detective Conway made my heart go all pitter-patter and I loved the snippets of her difficulties as a female detective within the murder squad, specially her struggles with being accepted as a part of the in-crowd without having to put up with casual sexism and harassment. Laughing it off as just a “boy will be boys” thing is just not an option for her, causing her to develop a reputation as a humourless shrew.

Another source of conflict in the novel are the questions of class and privilege. The girls’ lives are much insulated. The detectives offer a counterpoint as working class people. Interestingly, Stephen yearns for a glimpse of this posh world, wanting desperately the beautiful things in display. Conway wants no such thing. Please Tana French, can we have the next book centred on Detective Conway?

On the downside, two points stand-out. One is the lack of obvious LGBT characters – a girls only school and no lesbian relationship? Also, no PoC characters as far as I could tell.

The other is the introduction of magic realism half way through the novel. I feel I should engage with this aspect of the novel even though it completely spoils one of the most shocking elements of the book. This next paragraph contains SPOILERS! LOOK AWAY NOW IF YOU DON’T WANT TO BE SPOILED.

At around page 180, it is revealed that Holly’s group of friends have developed paranormal powers. They can make things float in the air, affect electricity, etc.

Because this is so completely unexpected it ends up being – at first – a cool mind-blowing twist that reinforces the idea of these girls’ closeness and friendship. However, upon reflection, I am not sure it works. It adds nothing to the actual story and in fact this element arguably makes the girls “other.”
It implies that they – with their strong sense of self, their understanding of patriarchy – are so different, so unique, that they are not normal. Which…leaves a bad taste in the mouth.

Those two points are the only discordant elements in an otherwise harmonious, incredible novel. After reading it, I proceeded to acquire and devour all of her books.

Holly dumped her schoolbag on the floor. Hooked a thumb under her lapel, to point the crest at me. Said, ‘I go to Kilda’s now.’ And watched me.

St Kilda’s: the kind of school the likes of me aren’t supposed to have heard of. Never would have heard of, if it wasn’t for a dead young fella.

Girls’ secondary, private, leafy suburb. Nuns. A year back, two of the nuns went for an early stroll and found a boy lying in a grove of trees, in a back corner of the school grounds. At first they thought he was asleep, drunk maybe. The full-on nun-voice thunder: Young man! But he didn’t move.

Christopher Harper, sixteen, from the boys’ school one road and two extra-high walls away. Sometime during the night, someone had bashed his head in.

Enough manpower to build an office block, enough overtime to pay off mortgages, enough paper to dam a river. A dodgy janitor, handyman, something: eliminated. A classmate who’d had a punch-up with the victim: eliminated. Local scary non-nationals seen being locally scary: eliminated.

Then nothing. No more suspects, no reason why Christopher was on St Kilda’s grounds. Then less overtime, and fewer men, and more nothing. You can’t say it, not with a kid for a victim, but the case was done.

‘Yeah. I’ve been there since first year.’

And left it at that, making me work for every step. One wrong question and she’d be gone, I’d be thrown away: got too old, another useless adult who didn’t understand. I picked carefully.