SFF in Conversation: Shaun Duke and The World SF Tour

We continue our ongoing new series of posts “SFF in Conversation” with a guest post from Shaun Duke of The World in the Satin Bag blog and a co-host of The Skiffy and Fanty show, to talk about a very cool project. 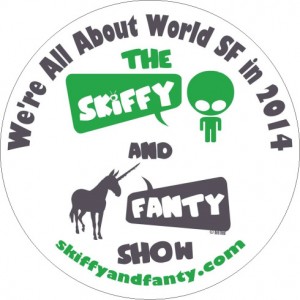 Please give it up for Shaun, everyone!

World SF is the Diversity Our Community Needs

Considering the storm of opinions consuming much of the SF/F community this month, it seems fitting that the argument I had intended to make in this post would have a deeper resonance within the community at large. That argument concerns the following question: why should we care about world sf?

One of the first experiences I had with world sf was in a college course on African science fiction and fantasy. Though that course focused heavily on African American sf/f, it did introduce me to Nalo Hopkinson’s Brown Girl in the Ring, a compelling work of dystopian literature, and opened me up to the idea that (shocker) people from other parts of the world might be writing the stuff I love, too. Future classes (in undergrad and grad school) would introduce me to authors like Salman Rushdie, Amitav Ghosh, Amos Tutuola, Ben Okri, Stanislaw Lem, Hiroki Endo, and many others. Some of these names aren’t often associated with sf/f, but as a fan of the genre, I immediately made the connection, latching on to these forays into the fantastic that, today, have been accepted as part of this grand tradition. These experiences, as such, influenced my academic interests, turning me into the avid postcolonial sf/f scholar that I am today.

It is also through these experiences that I came to understand why world sf is a crucial fixture in the sf/f community at large. I consider myself fairly familiar with the history of sf/f (at least, in a general sense); so much of that history has focused on the field in the U.S or the U.K., and for good reason: that’s where, I think it’s fair to say, the genres began as genres. There are always those works we can retroactively include into sf/f — and should, because they’re important hallmarks — but the real body of sf/f as a “thing” didn’t really occur until the early 20th century.

In any case, my college classes were not rooted in a traditional view of sf/f history. Rather, they were often about sf/f published by Russians, Indians, Nigerians, Kenyans, Koreans, the Japanese, Eastern Europeans, and so on and so forth. That exposure helped me make better sense of the scene, to put into place those elements which had not played such a crucial role in the written histories of sf/f. For me, these other authors deserved greater attention, because they were playing in the same sandbox, using their different worldviews, politics, and cultures as templates upon which to imagine new possibilities. World sf, in a sense, was the diversity the sf/f histories were missing.

And while I was thinking about all of this, going through the various phases of “nobody takes sf/f seriously” or “nobody is writing about postcolonial sf/f,” the academic world decided to flip its little head and say “yeah, this stuff is worth talking about.” It wasn’t as sudden as all that, of course, but it sure felt that way to me as I became more embedded into the world of scholarship. By the time I headed off to grad school, the field looked very different indeed: John Rieder’s Colonialism and the Emergence of Science Fiction (2008), Patricia Kerslake’s Science Fiction and Empire (2011), and Jessica Lang’s Postcolonialism and Science Fiction (2012) stormed across the academic scene. In the fiction world, we had the incredible anthology edited by Nalo Hopkinson and Uppinder Mehan, So Long Been Dreaming (2004), and, more recently, two volumes of The Apex Book of World SF edited by Lavie Tidhar (in 2009 and 2012) and We See a Different Frontier edited by Fabio Fernandez and Djibril al-Ayad (2013). The wealth of world sf literature available to us now is astonishing. On my shelves, I have anthologies on Jewish and Japanese sf/f (new and old), Afrofuturist fiction, and on and on and on and on. If it seems like I’m suggesting there’s a surge of interest on this subject, that’s because I really think there is. It’s not just in my field of academia, but in sf/f at large. We’re just more interested.

But there’s still so much more to discover, and every time we do, we add a little piece to this amazing genre. We share in a discovery of possibilities — good and bad — by seeing how others imagine the future or the past or non-existent places. It’s not about agreeing with the worldviews which undoubtedly influence the literary output of places “not like us” (i.e., “not like the West”); it’s about the diversity of opinions on how futures might function within the confines of a culture (or many cultures) or how cultures interact with technologies, the fantastic, and so on. Effectively, world sf is the diversity our field needs. Not alone, of course, but a big part of it. Sometimes, it’s really not about the money; it’s about the voices that deserve to be heard, to be included in a tradition that is already global in imagination, but not necessarily in scope.

This might provide some understanding for why The Skiffy and Fanty Show, on which I am a host, has focused all of 2014 on this thing called the World SF Tour. Granted, the immediate inspiration wasn’t my past; I learned to search out works from around the world in school, and to love it every single second. But the thing that made me think “yes, World SF Tour time,” was this little thing called the World Cup. I know. That sounds silly. But it’s true. When I discovered a newfound interest in football (soccer for us Americans), watching the 2012 World Cup online and the University of Florida women’s soccer team in person (we did really good that year), I had a little epiphany. Wouldn’t it be cool to celebrate world sf alongside the 2014 World Cup, one of the biggest international competitions in the world? If those sports junkies could celebrate the international scene through competition, why shouldn’t we celebrate the international scene through a conversation? And the rest, as they say, was history. Cliche, I know.

And that’s what we’re doing. All throughout 2014, The Skiffy and Fanty Show is focusing most of its attentions on sf/f from around the world. We’re interviewing authors and editors, discussing local scenes with fans, etc., and even talking about a few movies here or there (such as our discussion of Peter Jackson’s Heavenly Creatures). So far, we’ve explored Israel, New Zealand, and Australia; there are many more places to explore, too. It’s a little pebble of a celebration, but it sure feels like a slice of the awesome pie, too. Hopefully, you’ll join us on the adventure.

Shaun Duke is a PhD. student at the University of Florida studying Caribbean literature, postcolonialism, and science fiction. His fiction and non-fiction publications can be found on his blog, The World in the Satin Bag, where he writes about SF/F and related topics (mostly, he just causes trouble nobody notices). He is also one of the hosts of The Skiffy and Fanty Show.

He is also fundraising for travel expenses to attend Worldcon this August. He hopes to bring The Skiffy and Fanty Show and the World SF Tour there to expand the project’s scope. If you want to support the effort, head on over to the GoFundMe page, read about the milestone perks, donate, and spread the word.

SFF in Conversation: Seven Ways of Thinking About Medea