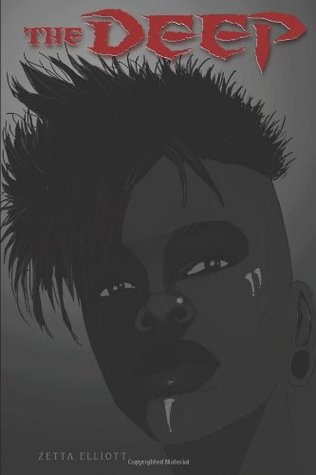 THE DEEP plunges readers into a dangerous, underground world policed by members of The League, a secret group of women and men who use their intuitive abilities to detect energy surges far below the earth’s surface. In the deep, ancient sources of malevolent energy are bubbling up through the bedrock, and only members of The League know how to detect and seal the leaks that allow evil to enter the world. Nyla Evans knows nothing about the war being waged beneath the city. It has been almost a year since she moved from Ramstein Air Base in Germany to Brooklyn, and Nyla is still searching for a way to belong. It doesn’t help that she has started to hallucinate while walking the city streets, but things get even stranger when a man named Osiris approaches her and offers to introduce Nyla to others who have similar “gifts.” When Nyla refuses, her friend D is kidnapped and held in the deep until Nyla agrees to let Osiris guide her underground. There, miles beneath Brooklyn, Nyla meets Lada—the mother who abandoned her a decade ago. Furious that Nyla is being recruited by The League, Lada tries to prevent her daughter from following in her footsteps. But Nyla feels at home in the deep and her training begins at an accelerated pace when The League discovers an earthquake will soon hit Brooklyn, releasing unprecedented levels of malevolent energy into the city. THE DEEP is the companion book to SHIP OF SOULS (2012), a Booklist Top Ten Sci-Fi/Fantasy Title for Youth and finalist for the Phillis Wheatley Book Award.

Stand alone or series: Book 2 of the Black geek trilogy but can be read as standalone

Why did I read this book: I am a huge fan of Zetta Elliott’s writing. I read and loved A Wish After Midnight as well as Ship of Souls, the book that precedes The Deep.

The Deep is a companion novel to the excellent Ship of Souls and the second book in what the author calls her Black geek trilogy. That first book introduced Nyla, a secondary character who, with her confidence, tough attitude and loyalty to the main character Dmitri, almost stole the scene.

The Deep is Nyla’s book, centring the story on her and her struggles with a developing sense of identity. An Afropunker who rocks tons of piercings, Nyla’s life is going pretty well. She is dating Keem, a super cool guy who truly cares for her and their friendship with Dmitri still goes strong. Plus, she is about to start at the elite Stuyvesant High School. But she can’t pretend that something weird isn’t happening as she keeps having these visions that deeply disturb her.

Then one day, a stranger named Osiris approaches Nyla and promises not only answers about these extraordinary hallucinations but also about her mother’s disappearance ten years ago. Unable to say no – considering the lengths that the group he is a part of will go to get her attention – Nyla ends up going deep beneath NY where she meets the members of The League, a secret group that fights sources of evil energy that try to break through to the surface.

One of them is her own mother Lada, a fully-fledged member of The League, someone who will do anything to keep her daughter from choosing a life of hardships when The League tries to recruit Nyla. But Nyla is her own woman and feels the calling of the Deep.

For such a short novel, The Deep, an Urban Fantasy with contemporary YA trappings packs a lot: from the introduction to a whole new, hidden underground world and a secret group that keeps evil at bay to the idea that what said group might be doing is not entirely that black and white; from expanding on the previous book by continuing Dmitri’s story but also focusing on Nyla’s own including her past, her present, her parent’s own struggles, her love life, her developing magical powers, etc. Although it is true that a person’s life is a complex mixture of different threads and the book speaks to this, I am not sure that everything combines seamlessly here.

The book greatest strengths are Zetta Elliott’s (always) beautiful writing and the careful, powerful characterisation of Nyla and of those who surround her. Zetta Elliott is at her best when writing about characters’ emotional make-up and Nyla’s relationship with her family, her stepmother, her boyfriend (and his family) are beautifully portrayed.

The Deep opens with an affecting scene that takes place one year before in which Nyla, whilst living with her family in an Air Base in Germany, has a date with a white boy that does not end well when he sexually assaults her. Her ensuing struggle to explain what happened and how, thoughtfully showcases what it means to be not only a young girl but also a young Black girl. This event informs a lot of Nyla’s development and her sense of self, of empowerment. It is no wonder that Nyla’s motto for the book is “I own myself” and it’s that desire which will lead her down a path of self-discovery. One that is so intrinsically connected to that of her missing mother and which will definitely colour her ultimate choice.

There is power here and it is a great part of the author’s intention to create a book in which a black girl is the magical heroine for a change. Zetta Elliott writes her intentions to the fullest, including visually impacting scenes like the one when Nyla’s piercings mould into her face: the way she chooses to present herself is thereafter part of who she is.

That said, I feel The Deep is too short a novel to introduce a whole new world and I think the story suffers for it when it comes to the fantasy background. It’s hard to understand The League or accept this idea of evil energy as something that just is and that is trying to break through from the bedrock into the surface. The biggest disappointment though was the way Nyla’s own magic arc was rather short-changed and terribly abrupt and rushed out.

In other words, I wanted more, more of Nyla and of her newly-discovered world and powers. Thankfully there is a third book in the works!

Notable Quotes/Parts: No quotes but I love the book trailer:

Reading Next: Lab Rat One by Andrea K. Host

Ebook available for kindle US, kindle UK and createspace

From the Page to the Screen: The Golden Compass