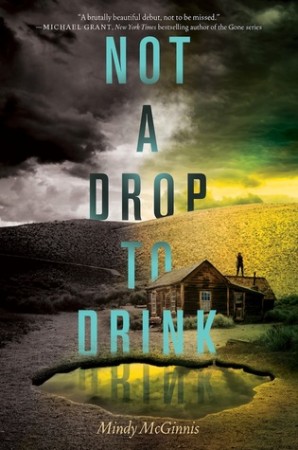 Title: Not a Drop to Drink

Regret was for people with nothing to defend, people who had no water.

Lynn knows every threat to her pond: drought, a snowless winter, coyotes, and, most importantly, people looking for a drink. She makes sure anyone who comes near the pond leaves thirsty, or doesn’t leave at all.

Confident in her own abilities, Lynn has no use for the world beyond the nearby fields and forest. Having a life means dedicating it to survival, and the constant work of gathering wood and water. Having a pond requires the fortitude to protect it, something Mother taught her well during their quiet hours on the rooftop, rifles in hand.

But wisps of smoke on the horizon mean one thing: strangers. The mysterious footprints by the pond, nighttime threats, and gunshots make it all too clear Lynn has exactly what they want, and they won’t stop until they get it….

With evocative, spare language and incredible drama, danger, and romance, debut author Mindy McGinnis depicts one girl’s journey in a barren world not so different than our own.

Stand alone or series: Book 1 in a planned series (I think?)

Why did I read this book: While the premise of this book is somewhat standard fare (post-apocalyptic dystopian future following ecological collapse due to global warming/environmental mismanagement), I’ve heard nothing but praise for Not A Drop to Drink. Naturally, I bought the book at the first opportunity.

Lynn’s world comprises three things: her mother, her gun, and her pond.

From the time she could lift a rifle, Lynn has learned to guard her home. With her mother’s unflinching guidance and steady aim, no one approaches their house and their precious water source, without getting fed a bullet.

This is Lynn’s reality: a world in which water is scarce, worth dying over, worth killing over. Every second of every day is devoted to survival – purifying the brackish water from the pond, killing and curing meat for inevitably cruel winters, and long hours on the roof monitoring for coyotes and would-be thieves.

The cool comfort of the mother-daughter pair’s solitary existence, however, is upended in the course of a single day and an errant bullet, leaving Lynn to fend for herself. Then strangers – city folk who have stupidly decided to brave the wild without food, water or shelter – ask for aid, Lynn must make a choice. Follow the teachings of her mother and kill anyone that comes too close to her land? Or help those in need?

The debut novel from Mindy McGinnis, Not a Drop to Drink is a fascinating, bleak excursion into a future in which the most precious of resources, water, is incredibly scarce. While this premise has been done before – immediately, Cameron Stratcher’s The Water Wars comes to mind – McGinnis’ work stands out so dramatically because it is so desolate, so unforgiving. Protagonist Lynn literally does nothing but worry about survival every second of every day, and has been raised to shoot first and ask no questions in order to defend her land. One complaint I voice over and over again when it comes to dystopian speculative fiction novels, especially in the YA category, is the lack of teeth – these so-called dystopias are little more than dramatic vehicles which good looking couples rail against because the government wants to, like, break up their love. In Not A Drop to Drink, however, the world is really and truly dystopian, the government could care less about Lynn and her land, and it is every person for themselves.

Also on the positive side, I love that protagonist Lynn is both incredibly competent, even jaded, when it comes to defense and survival, but simultaneously sheltered and naive when it comes to interactions with other humans. At the onset of the novel, Lynn has only talked to two people in her entire life: her mother, and her neighbor Stebbs (whom she’s only talked to once, when she was a much younger girl). She can fire a rifle with sharpshooter precision, and knows how to purify water and dress a deer, but has no concept of music, of banter, of sex (although, somewhat surprisingly, Lynn can quote poetry, thanks to her mother’s college degree and thick anthologies – hence the title of this book). When she meets the ailing city folk to the south – a ragtag, starving little girl, teenage boy, and pregnant woman near term – Lynn’s naivete and vulnerability become glaringly apparent. While the tough-yet-vulnerable heroine is perhaps becoming something of a cliche, in this reader’s opinion, Mindy McGinnis manages to bring Lynn to life as a layered, real person.

While I loved Lynn very much and it is her voice and perceptions that color the book, there are other things I was not so thrilled with in Not a Drop to Drink. In particular, I detest the instaromance that blossoms between Lynn and Eli (I suspect this brand of romance is a subgenre requirement at this point, but it still annoys the hell outta me). In this book, Lynn literally falls for the first boy she’s ever seen in her life. In a book that felt so authentic and carefully attuned to the harsh realities of this dystopic future, the romance angle felt contrived and disappointingly pandering. Criticism said, I’m happy that the romance is on the backburner – not to mention, I’m very happy with the way this particular romance ends (though I suspect mine might not be a particularly popular opinion).

Ridiculous romance aside, the other relationships in the book are thankfully much stronger. In particular, the bond between Lynn and the child she takes into her home, Lucy, is wonderfully, heartbreakingly wrought. Too, I loved the prickly relationship between Lynn and her only neighbor Stebbs (for reasons her mother would never explain, Stebbs hadn’t ever been a part of their lives). As things change, however, and Lynn starts to change the way she perceives of others and the world around her, the relationship between her and Stebbs grows and becomes a wonderful, hard-to-classify thing. It’s not quite a paternal relationship, but there is respect and friendship between the pair, and I loved reading it unfold.

Ultimately, at the end of the long, dry day, I was thoroughly impressed by Mindy McGinnis’ debut novel. Gritty and painfully bleak, Not a Drop to Drink is the kind of YA dystopia to which all other novels in the genre should aspire (instaromance aside). Absolutely recommended, and in the running for one of my notable reads of 2013.

Notable Quotes/Parts: You can read the first 64 pages online HERE.

Over at Kirkus: The Beautiful Land by Alan Averill