Book Review: She Is Not Invisible by Marcus Sedgwick 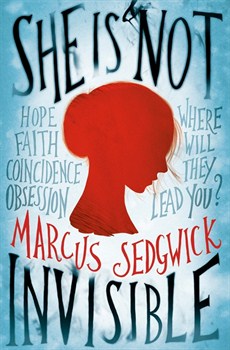 Title: She Is Not Invisible

Laureth Peak’s father is a writer. For years he’s been trying, and failing, to write a novel about coincidence. His wife thinks he’s obsessed, Laureth thinks he’s on the verge of a breakdown.He’s supposed to be doing research in Austria, so when his notebook shows up in New York, Laureth knows something is wrong.

On impulse she steals her mother’s credit card and heads for the States, taking her strange little brother Benjamin with her. Reunited with the notebook, they begin to follow clues inside, trying to find their wayward father. Ahead lie challenges and threats, all of which are that much tougher for Laureth than they would be for any other 16-year old. Because Laureth Peak is blind.

How did I get this book: review copy from the publisher

Why did I read this book: Marcus Sedgwick is a brilliant writer and I have loved everything I read of his. He is an auto-read.

Laureth Peak stole her mother’s credit card, kidnapped her little brother Benjamin and embarked on a flight to New York to try to find their missing father. This is a blunt summary that needs to be unpacked: Laureth’s father is a writer who has been obsessed about his work-in-progress – a novel about coincidence – for years. This dedication has caused friction with his wife and their marriage is not as friendly as it used to be. Laureth understands these things as much as she understands the importance of her father’s notebook to his research. So when that notebook is found in NY (when her father is supposed to be in Austria), she knows something must have happened. Her mother won’t listen to her and so those aforementioned drastic measures are necessary.

You can’t miss what you’ve never had, because I’m not unhappy with the way I am, because I don’t mind being blind. What I mind is people treating me as if I’m stupid.

She Is Not Invisible is a book narrated entirely from the perspective of a character who is blind from birth and yet it is not a book about blindness or one that uses her blindness as a gimmick [1. Insert the caveat here that my perspective is coloured by my able-bodied privilege. From the acknowledgements at the end, it sounds like Mr Sedgwick did his research by visiting a boarding school for the blind and interacting with the students but I would be interested in hearing other perspectives on this] . It is a rather raw story about a young teenager who goes out into the world and puts herself out there.

The plot itself concerns Laureth and Benjamin’s Dangerous Adventure in NY, where they run up and down the city, looking for the clues to find their father, their encounter with helpful strangers as well as dangerous individuals. She Is Not Invisible: sleuthing while blind.

But beyond the mere appreciation for the type of story this book tells, She Is Not Invisible is a beautifully written story that encapsulates so much. From her touching relationship with her young brother and the way they work as a duo to the way she interacts with the world – and how the world reacts to her. Or the way that story is told in a non-linear narrative because that’s how Laureth thinks. The book is also interspersed with extracts from Laureth’s father’s notebook and his research on the topic of “coincidence”. These are interesting for two reasons: because they link to real life research about the issue but also because they allow for Laureth to deeply connect with her father and to try to understand where he is coming from. Coincidence is thus, a recurring theme – why do they feel so important, and mean so much to a person? Is it true that they are only interesting to those that experience it because coincidences always sound so outlandish to outsiders?

It is also touching the way that Laureth perceives her parents, which is in turn informed by the way that they respond to her blindness (an overprotective mother, an almost dismissive father). It is interesting the relationship that she has formed with her parents because of that and especially her adamant defence of her father’s behaviour. To the reader who is an outsider to that dynamics, the layers of their behaviour are much more obvious than Laureth’s perception of them.

It is also important to note that even though Laureth is a character who happens to be blind, this doesn’t mean that her blindness doesn’t impact who she is. The way people react (or interact) to her, or the way that she is so aware of that and understands people’s reactions even though they hurt her. This book doesn’t pull punches by making things easier to the reader by magically solving heart-breaking interactions. There is no romanticising of blindness, there is no extra-sensorial super powers.

I have yet to be disappointed by a book from this author. Highly recommended.

“Love is a funny thing, and once again I really don’t mean it’s amusing. I mean it’s odd. Strange. Weird.

But I no longer believed that they did. It was obvious, in the thing that they dd, and the way that they were. And the way they called each other “honey”. In just the wrong tone of voice, through teeth held tight.