Book Review: All Our Pretty Songs by Sarah McCarry 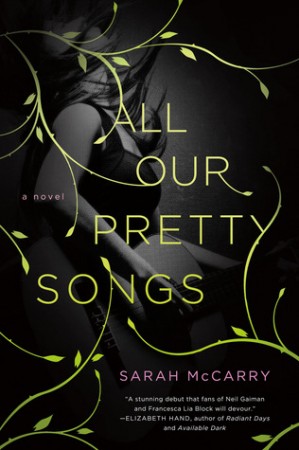 Title: All Our Pretty Songs

The first book in an exciting YA trilogy, this is the story of two best friends on the verge of a terrifying divide when they begin to encounter a cast of strange and mythical characters.

Set against the lush, magical backdrop of the Pacific Northwest, two inseparable best friends who have grown up like sisters—the charismatic, mercurial, and beautiful Aurora and the devoted, soulful, watchful narrator—find their bond challenged for the first time ever when a mysterious and gifted musician named Jack comes between them. Suddenly, each girl must decide what matters most: friendship, or love. What both girls don’t know is that the stakes are even higher than either of them could have imagined. They’re not the only ones who have noticed Jack’s gift; his music has awakened an ancient evil—and a world both above and below which may not be mythical at all. The real and the mystical; the romantic and the heartbreaking all begin to swirl together, carrying the two on journey that is both enthralling and terrifying.

And it’s up to the narrator to protect the people she loves—if she can.(

Stand alone or series: Book 1 in a new series but can be read as standlone

How did I get this book: Review copy from the author.

Why did I read this book: Sarah McCarry writes one of my favourite blogs EVER: The Rejectionist. I’ve always loved her input, her reviews and her essays and when I learned she had a book coming out, I did a small jig. I did.

All Our Pretty Songs: almost too good to be true. How is this a debut work? With this level of awesome prose? And gutsy storytelling? And by gutsy I really mean: simply writing a story that follows young characters who experience life – sex, drugs and rock & roll – in a way that is as real as any of all the other possible portrayals of teen life in YA.

So, unnamed narrator narrates: about her life and the life of her best-friend-almost-sister Aurora; and the way that she is always taking care of beautiful, volatile Aurora. There’s always been the two of them and their love and dedication and loyalty to each other. And there is a passion for music here that seeps from the narrative and that passion becomes almost tangible when they meet a musician named Jack. His gift is amazing and when he plays, everybody listens. And our unnamed narrator falls in lust and in love with Jack almost immediately (and definitely completely).

And even though the world we all inhabit is very much one of real things as it just so happens – as our narrator finds out – it is also one where things are real. So…when we say that everybody listens to Jack and that everybody pays attention to Aurora, we mean that literally. There is myth come to life here (and why the Pacific Northwest? Because “they” are everywhere) and the unnamed narrator – who is not beautiful or talented – sits in the margins, looking from the outside, unable to follow where they eventually go.

And the narrative is kind of dream-like and there are parts where there is a bit of stream of consciousness (kinda like this review) and as the story progress it becomes both more focused and more meandering if that makes any sense at all. What strikes me the most about the story is how even though the plot deals with life and death and danger and terror, the narrative is still extremely insulated because as worldly as the narrator seems to be with the parties and the sex and the drugs and the freedom, she is still a 17-year-old girl who makes snap judgements about people and whose narrow view of those she loves and about herself is still informed by her inexperience.

And I love her for all of that. I love that the narrator and the story is about complex relationships with close family, close friends, and sisterhood. Also with lovers and how love shapes her view of the world. So inasmuch as the narrator falls irrevocably in love with Jack, she is still involved in other stuff and with other people – I loved her relationship with her mother and with her friend Raoul. Plus there is a lot of negotiating that happens between how freely she has given her body and her heart and the fact that sometimes this is not enough to the other person. So this is definitely Coming-of-Age as much as it is Quest (when are those not the same?) . And central to this is also this self-awareness and this slow learning curve about what it means to be talented and beautiful which includes astute observations about our world and how we choose to look at people and allocate them “worth”. Because this is also a mythology retelling it all comes together:

Once upon a time, girls who were too beautiful or too skilled were changed into other things by angry gods and their wives. A cow, a flower, a spider, a fog. Maybe you boasted too loudly of sleeping with a goddess’s husband. Maybe you talked too much about your own talents. Maybe you were born dumb and pretty, and the wrong people fell in love with you, chased you across fields and mountains and oceans until you cried mercy and a god took pity on you, switched your body to a heaving sea of clouds.
Maybe you stayed in one place for too long, pining for someone who wasn’t yours, and your toes grew roots into the earth and your skin toughened into bark. Maybe you told the world how beautiful your children were, and the gods cut them down in front of you to punish you for your loose tongue, and you were so overcome with grief your body turned to stone.

Which just goes to show how these mythological beings (also EVERYBODY on the planet) are complete assholes who randomly and arbitrarily assign value to people.

Because here is the thing: as much as the narrator constantly tells us that she is unworthy because she is not typically beautiful or talented like her friends the fact remains that she is equally AWESOME. Even though she is flawed (who isn’t?), there is loyalty, and dedication, and determination and talent here in spades. Probably my favourite quote:

I will not let the terror of the dark get hold of me. If this is a test, I will fucking pass it. I will pass any test this creepy skeleton in a crappy suit can give me. Let them turn me into stone or water or flowers. I came here for my lover and the girl who is my sister, and they were mine before anyone else tried to take them from me, before this bony motherfucker showed up on my stoop and let loose all the old things better left at rest. Jack I will let go; Jack is on his own, now. But I will die before I leave Aurora down here.

Dear narrator, you are so awesome and I don’t even know your name.

To sum up: great book. Really reminded me of Imaginary Girls and September Girls in terms of tone, narrative and themes.

All Our Pretty Songs can be read as a self-contained, standalone book but I understand it is the beginning of a series. I don’t know where this is going but I will follow and I will not even look back.

Notable Quotes/Parts: One of my favourite characters was Raoul, who often felt like the one reliable adult in the novel. This bit here is awesome:

Some people push it down so far inside they think it can’t hurt them, and it festers there. Some people talk about it. Some people don’t. Jack told you he was making the best
decision he knew how to make in the circumstances he has to deal with. He has something people want, and it’s up to him to decide how he gives it to them. How he lets them
take it.

Reading Next: To be decided

Ebook available for kindle US, nook and itunes