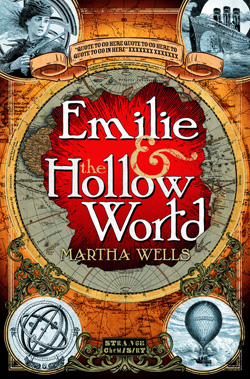 Title: Emilie and the Hollow World

While running away from home for reasons that are eminently defensible, Emilie’s plans to stow away on the steamship Merry Bell and reach her cousin in the big city go awry, landing her on the wrong ship and at the beginning of a fantastic adventure.

Taken under the protection of Lady Marlende, Emilie learns that the crew hopes to use the aether currents and an experimental engine, and with the assistance of Lord Engal, journey to the interior of the planet in search of Marlende’s missing father.

With the ship damaged on arrival, they attempt to traverse the strange lands on their quest. But when evidence points to sabotage and they encounter the treacherous Lord Ivers, along with the strange race of the sea-lands, Emilie has to make some challenging decisions and take daring action if they are ever to reach the surface world again

Why did I read this book: I am a HUGE Martha Wells fan and wanted so much to read her first YA book.

Martha Wells is one of my favourite writers. I have loved her Books of the Raksura series as well as Wheel of the Infinite and, based on the strength of those books, I also plan on reading more from her backlist soon. Needless to say, I was very interested to read Emilie and the Hollow World, Wells’ first foray into YA territory.

The story follows main character Emilie as she runs away from home to join her cousin in the big city, but ends stowing away on the wrong ship. Here, Emilie meets Lady Marlende, who is about to embark on a wondrous adventure to the centre of the planet in order to rescue Marlende’s missing father.

Emilie is Science Fiction reminiscent of Jules Verne with a side of Fantasy (i.e. when something cannot be explained with Science, Magic comes to the rescue). It is also an adventure romp and a non-stop thrill-ride that includes different peoples (including non-humans), dastardly villains, sabotage, daring rescues, and fun escapades.

The book contains some of Wells’ signature traits, including diverse and memorable world-building, thanks to the fascinating “hollow world” setting. The novel also features astute, thought-provoking observations of gender roles and expectations, especially as Emilie’s new adventures and ensuing realisation about how she can effectively engage with the world are juxtaposed against the lower expectations and teachings of her relatives, who expect the worst of her because Emilie’s mother ran away from home:

As if all her life she had thought her world was one thing: closed-in and solid with carefully defined boundaries; so much so that running away to a relative with a respectable girls’ school in Silk Harbor was almost unimaginably daring. Now the boundaries had fallen away, leave a broad vista that was stranger than anything she had read in a gothic novel.

This is probably the best thing about the book and what kept me reading.

Unfortunately – and it pains me to say this – Emilie and the Hollow World is not up to par with what I have come to expect from this author. The story jumps from plot point to plot point without much in the way of development. Emilie is for the most part a subject of this story, almost a standby character who merely observes and reacts to events. Even taking into consideration the quote above and the fact that in the end she learns she can do more with her life, this lesson almost seems to have been learned by rote rather than a result of actual character development. This goes beyond a mere distinction between a plot-driven novel and a character-driven one, simply because there was just not enough of either vital element here. In fact all signs – from the plot elements that appear to some moments of epic badassery – point to the potential here for a meatier book. In other words: in order to be a better book, it needed more complexity.

Which brings me to my final point: the sinking feeling that this lack of complexity is a result of the book having been written down because it is intended for a younger audience. This is very clear in the way that Emilie acts and thinks – her thought processes, manner of speaking and naivete make Emilie sound like a much younger character. For most of the book, Emilie sounds as though she could be as young as 11-12 which basically coloured my perception of the entire book. There is even one character that addresses Emily thusly: “you are one brave little person.” This simply does not jive with a teenage character and there is nothing, to me, that can justify Emilie as a teen. In a way, Emilie and the Hollow World actually sounds much more like a Middle Grade novel than a YA one – but still one that is frustratingly lacking in complexity.

Creeping along the docks in the dark, looking for the steamship Merry Bell, Emilie was starting to wonder if it might be better to just walk to Silk Harbor. So far, her great escape from Uncle Yeric’s tyranny hadn’t been great, or much of an escape. It’s going to be embarrassing if I don’t get further than this, she thought, exasperated at herself.

Emilie reminded herself failure wasn’t an option. She scrambled behind a row of barrels, her boots squishing in foul-smelling muck, and squinted to get a look at the slip numbers next to the pier entrances. It was a cloudy night, the half-moon mostly concealed, and this end of the docks had only a few widely-spaced gas lamps. At the other end there had been tap houses and inns, and more people to blend in with, sailors or dockworkers heading for home and passengers waiting for the ships with a late boarding. This boardwalk was empty except for the occasional armed watchman, and if Emilie was stopped, she couldn’t very well say indignantly, “I’m not a thief, I’m a stowaway, thank you very much!”

And she had to leave the city tonight; Uncle Yeric was a penny-pincher, but he might very well hire a hedgewitch to track Emilie with magic. Uncle Yeric and Aunt Helena would never lower themselves to hire a hedgewitch under normal circumstances, but considering what they thought Emilie was running off to do, they might make an exception.

Emilie had passed the gas-lit graving docks and the warehouses, looming dark and quiet. The hydraulic tower and the smaller pumphouse, its chimneys still billowing smoke against the night sky, made a good landmark; at least she knew she was in the right place. The Merry Bell and the other short-range steamers should be down here somewhere.

If Emilie hadn’t spent money on food, she would have had enough to get to Silk Harbor by buying passage on the Coastal Ferry, which had departed late this afternoon. That had been her original plan.

She had formed the plan very carefully, stealing the newspapers out of the scrap paper bin to study the steamship lists and to learn where the passenger ferries berthed and the best route through the city of Meneport to reach the harbor. But none of the newspapers, or the storybooks that featured romantic heroines thrown out by their evil stepmothers (or stepfathers, or stepuncles) to make their own way in the world, had mentioned how painful starvation actually was, how once past the stage of acute pain, it made your thoughts slow and your body weak. It had taken Emilie two days to walk to the city, and by the end she had been footsore, exhausted, and so blind with hunger that she had stopped and bought a pork pie at the first shop she saw. It had fortified her for the walk across the city to the port, where she had succumbed again and bought a sausage roll and tea. Then she had found the booking office for the steamship lines and discovered that she was half the passage price short. If Emilie had had any inclination to see herself as a romantic heroine, this experience would have cured her of it.

Over at Kirkus: Above by Leah Bobet