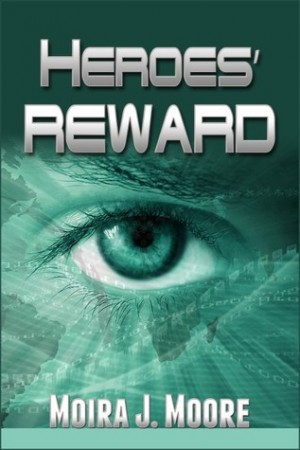 Shield Dunleavy Mallorough and Source Shintaro Karish have lived in Flown Raven for five years, protecting its residents from natural disasters and enjoying the lack of interference from both the council of the Triple S and the Emperor.

When they are unexpectedly summoned to Shidonee’s Gap by the council, Lee and Taro learn that while they have been living at their isolated post, there have been a lot of changes in the world, changes that will drag them into unimaginable duties and unprecedented danger.

Stand alone or series: Book 7 in the Heroes Series

Why did I read this book: I love Moira J. Moore’s Heroes books. I’ve been a fan for years, and have reviewed these books each year since 2008 (Heroes Adrift was one of the first books I reviewed here when we started The Book Smugglers)! Needless to say, I was heartbroken when I found out that Ace dropped the series before Moira was able to publish the seventh and final book. Thankfully, and truly heroically, Moira has written and self-published Heroes’ Reward – and it is my pleasure to read and review it here.

It has been five years since the dramatic events of Heroes at Odds, and, for the most part, Source and Shield Pair Shintaro Karish and Dunleavy Mallorough have had a much-earned restful break at the Flown Raven estate. Here, Taro and Lee know peace and happiness; Lee continues to improve on her casting skills while Taro is comfortably at home with his cousin and friend Fiona (aka Lady Westsea, and the title holder of the estate). This hero’s respite, however, is about to come to an abrupt end. Lee and Taro receive unexpected summons to return to Shidonee’s Gap, home of the Triple S Academy and headquarters, where they find the Triple S and the Emperor set at direct odds. Relieved of their duty as the Flown Raven Pair, Lee and Taro are mandated by the Triple S council to train shields and sources in the (formerly forbidden) arts of casting and of causing events. The Emperor, it seems, is gearing up for war against the Triple S, and it is up to Lee and Taro to train their fellow sources and shields for battle as best they can.

It’s not long before Lee and Taro find themselves summoned by the Emperor himself – and after they are escorted to the palace, they are instructed by the Emperor to teach his casters and rogue pairs in the very same casting and event-instigating skills they’ve been teaching to the Triple S troops. Quickly, Lee and Taro see just how unstable and frightening the Emperor and his new advisor Lady Green are – the Emperor’s opinion is the only one that matters, and any dissenting voices are immediately silenced (on point of death) without fair trial. Together, Lee and Taro must figure out a way to stay alive while subverting the Imperial efforts, before war tears their land apart.

The seventh and final book in the Heroes series, Heroes’ Reward is a fitting end for Lee and Taro’s adventures together as the Triple S’s most talented – and independent – Pair. Ever since Lee and Taro were bonded, they’ve been on a non-stop roller coaster of action and drama, and in this final novel, we see the thrilling culmination of many of the different elements that have been simmering since Resenting the Hero. Most notably, Lee’s ability to cast and use her shielding abilities to inflict devastating results, as well as Taro’s ability to heal and cause events all come to fruition in this ultimate book. This is also the book in which we see the dramatic repercussions of the Pair’s actions in Heroes Adrift (saving young Aryne, mixed blood heiress to the Empire), as the Emperor’s state of mind and aggressive, harsh policies leave the empire torn and weakened – Aryne is the Empire’s salvation, to unite a broken land (with Lee and Taro’s help, of course). Having invested so many years in this series, it’s amazingly gratifying and wonderful to see how it all ends, from a reader perspective. I love that Moira Moore made the effort to tell this story (even though her publisher dropped the series, after years of mis-marketing and mis-packaging the books, I might add). I love the way that everything comes to a fitting climax and resolution in Heroes’ Reward – it is fittingly rewarding as a read.

Easily, this sense of finality and resolution is what I loved the most about Heroes’ Reward. This, coupled with the incredibly high stakes (what with the future of an empire at stake) and the emphasis on consequences for all of Lee and Taro’s actions over the arc of the series is an incredible payoff. For example, Lee’s skill with casting has grown over the course of the past few books, and in Heroes’ Reward, she puts those skills to the test. When she finally unveils the extent of her abilities (particularly, the ability to destroy other Sources by trapping their channeled forces as a destructive/inverse type of Shield power), the consequences are dire. Others on the opposing army learn what she is capable of, and follow her example with predictably frightening and horrific results. Another excellent strong point of this book is the pervasive feeling of powerlessness in the face of oppression, as Lee and her friends are torn between a sick Emperor with no respect for his people, and a bureaucratic (and deeply hypocritical) Triple S. In the face of this impossible situation, Lee’s fear and the helplessness as the Pair is caught between these opposing forces is a very real and palpable thing.

On the negative side, however, Heroes’ Reward continues that disconnected feel between both Lee and Taro. For the past couple of books, Lee and Taro’s interactions – for all that they are always together – feel completely secondary and disjointed. Perhaps this is to be expected, considering how much is happening in the plot department, but one of my favorite things about this series overall is the relationship and interactions between Lee and Taro – the good, the funny, and the bad. By this seventh book, their relationship is firmly on the back-burner, and it’s kind of a shame. We’ll never get more of them, and I miss that intimacy the Pair had in earlier novels. Also on the shortcomings side, stylistically, there was some repetition of phrases and Lee wasn’t quite as pithy as usual. That said, the writing was solid all around (also, on a technical note, formatting for the ebook simple and clean – a huge plus).

These criticisms said, overall, Heroes’ Reward is an enjoyable and fitting end to a great series. I sincerely hope that everyone checks out the books and gives them a fair shake. Absolutely recommended – and I hope to read more from Moira J. Moore soon!

“We’re going to cut the property in half,” Fiona announced. “These documents are a mess. I’ve had three solicitors look at them.” At Fiona’s expense. She didn’t say so, but everyone knew it, so both the plaintiff and the respondent had better be damned grateful. “There have been so many purchases back and forth, so many allowances over the decades, it is simply impossible to determine who owns what. So we’re going to start all over. Each of you own half. The boundary is at the eighth mark. I expect you both to have proper surveys drafted and to respect them, and the next time I hear of any kind of sabotage, someone’s getting fined.”

Neither party liked that. Their eyes were narrowed, their jaws clenched. Both had hoped to get the whole piece of land. But neither voiced their objections, and they both bowed deeply. “Thank you, my lady,” one said, and then the other. At her nod, they strode to the door, maintaining a significant distance between them.

It was Decision Day, held once every week, when Fiona Keplar, Duchess of Westsea, heard the complaints and disputes of her tenants and tried to settle them without anyone losing their minds over the results. When she had first taken on the responsibility, more than seven years before, she had been uncertain in her abilities, and the tenants had often challenged her rulings. Sometimes with fists. Since then, she had become adept at it, and while her tenants didn’t always like her decisions, they complied with them, and with better grace than they’d shown at first.

It probably helped that Westsea had become extremely prosperous over the last several years. Fish and whales were abundant and crops were rich. The weather had been kind. Traders from far afield came to Flown Raven to sell rare goods and pay coin for food, shelter, and stock. Everyone profited.

I had noticed that people confident about having well-constructed roofs and a quantity of good food were less fractious. Not entirely, of course. There were always crazy, unreasonable people, quality of life notwithstanding, but Decision Days had certainly become less violent.

There was a brief pause as we waited for any further plaintiffs to step forward. When none did, Fiona announced, “I call Decision Day closed. From this until next Day, leave your concerns with Solicitor Panimus.”

In the seats along the wall of the courtroom, the spectators – local gentry and others who had nothing better to do with their time than watch the legal squabbles of others – rustled and spoke together in whispers, dissecting Fiona’s decisions and the behaviour of the parties.

“So, what do you think?” Fiona asked me as we climbed up the stairs to the second floor of her manor.

I smiled. “You ask me that every week.”

“I value your opinion. You’ve lived here almost as long as I have.”

I shrugged. “All of your decisions seem sound to me.” I didn’t always agree with her rulings, but there was always well-constructed reasoning behind them. And if there weren’t, I would never say so. It wasn’t my place.

I was a Shield, and a Shield’s only task was to protect her Source, not tell leaders how to fulfill their responsibilities.

You can read Chapters 1-3 online HERE.

Rating: 7 – Very Good, and an 8 – Excellent for the series overall as a whole

Reading Next: The Name of the Star by Maureen Johnson

You can read the full book for free online at Moira’s LiveJournal HERE. You can purchase the self-published ebook on: kindle US, kindle UK & Smashwords

Over at Kirkus: Mr Penumbra 24-Hour Bookstore by Robin Sloan

Over at Kirkus: Horrorstör by Grady Hendrix