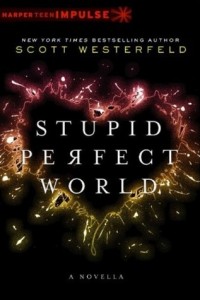 In this future-set novella by bestselling author Scott Westerfeld, Kieran Black lives in a “perfect” world. Disease and starvation have been eradicated, sleep is unnecessary, and it takes no time at all to go from the Bahamas to the moon. But now Kieran has to take Scarcity, a class about how people lived in the bad old days. And as if sitting through an hour of Scarcity every day wasn’t depressing enough, it’s final projects time. Each student must choose some form of ancient hardship to experience for two whole weeks. Kieran chooses having to sleep eight hours a night, which doesn’t seem too annoying.

Maria Borsotti has never thought much of Kieran, but she decides to take pity on him and help him out with his project. Soon, Kieran is sleeping and having vivid dreams, while Maria, whose Scarcity project is to give up all teenage hormone regulation, is experiencing emotions she never knew she had. As their assignments draw them closer together, they begin to wonder if the olden days weren’t so bad. Maybe something has been missing from their perfect lives after all?

Stand alone or series: Standalone novella (although it could be part of a kickass new series, just saying…) EDITED TO NOTE: Apparently, Stupid Perfect World was originally published in the 2008 anthology Love is Hell.

Why did I read this book: I have read and thoroughly enjoyed Scott Westerfeld’s Uglies series, so when I learned he was one of the launch authors for this new digital-only publishing line, I was intrigued. I actually didn’t know anything about Stupid Perfect World before diving in – heck, at only 50-some pages, I figured it would be worth the time.

The time is the future, and the world is perfect. Ridiculously perfect. Stupid perfect.

In this future world, teens must enroll in a mandatory class called “Scarcity” in which they must participate in a unique class project – they must endure an experience that their ancient human ancestors would have had, for a whole two week long period. Some students choose to have the common cold. Some choose to relinquish their teleportation privileges. After discarding a number of terrifying sounding experiences, the usually slackerish Kieran Black chooses a final project experience that will change him forever: he chooses Sleep. (Oh yeah, in the future there is no need for sleep, thanks to the miracles of modern medicine.) Kieran immediately stops his metabolic nanobots from regulating his cell regeneration, and must achieve REM sleep each night for the duration of the project.

Maria Borsotti is also in Scarcity class and has always thought of Kieran as kinda cute, but mostly just a shallow guy with as much complexity as a layer of industrial paint – so, when she hears Kieran’s choice of project, she’s actually impressed. Maria’s own final involves her decision to suspend her hormonal balancers – that is, her hormones will run free, just like teenagers of old.

All seems well and good, until Maria and Kieran begin to realize just how much their Scarcity projects are changing them and their vision of the world around them. Kieran not only sleeps, but starts to dream. And Maria starts to understand the “madness” of the heroines of her favorite ancient books, as her emotions and urges become manifest.

A great short story can be a beautiful thing when it’s done right – Stupid Perfect World gets the job done pretty well (albeit with a few reservations). I will confess upfront that I am not the biggest fan of short fiction, especially in collection or anthology format. I tend to get invested in characters and want so much more – more in terms of character, of background and world and complexity and depth (particularly in short SFF works). Such is the case with Stupid Perfect World; I love the premise of the book, the dual narrators, and the trademark Westerfeld zip and charm. I love the idea of this future world, where humans want for nothing, where war and famine and pestilence are distant intangibles from the ancient past, and the closest that students ever get to understanding our own modern woes is through a two week mandatory pass/fail course. We get just enough information about how this stupidily perfect world works, how huge distances are transversible at the speed of thought.

What we don’t get, however, is that more factor – even if humans could go for periods without sleep, is that something we should do? If humans can no longer dream, is that desirable? Should hormones and passions be regulated? Stupid Perfect World poses these tantalizing questions, but offers no further insight or answers, which is kind of ridiculously infuriating. There’s plenty of room here for meaty exploration (if I’m being honest, it sounds like a dystopian trilogy setup, doesn’t it?), but none is given.

But enough wishing for things that did not happen – because the things that do occur in the story are pretty solid. The characters of Kieran and Maria are well drawn, and their eye-opening experiences separately and together are alternately hilarious and genuine (in particular, I love Maria’s melodramatic reactions and analytical responses following her mood swings). The only execution niggle, for me, was that the alternating narrator technique – as the short starts with Kieran as narrator and switches to Maria in the next chapter, alternating for the rest of the story – was not quite a seamless transition. Both Kieran and Maria sound very similar, making the reading experience a little uneven and confusing, especially when Maria follows Kieran’s opening (I had no idea who was talking and was thrown until I figure out it was Maria narrating).

Also, on one major edit/consistency fail that I must mention: the second and third sentences of the story state:

It wasn’t a real course with grades and everything, so only the most pathetic meekers worked hard at it. The rest of us just showed up and tried not to fall asleep.

The line about “trying not to fall asleep” of course is pretty funny, considering the point of the story and Kieran’s project.

These niggles aside, I thoroughly enjoyed Stupid Perfect World – and I kinda hope that more short stories, or full-length books, in this world are coming.

Like most days, I was barely on time for Scarcity class.

It wasn’t a real course with grades and everything, so only the most pathetic meekers worked hard at it. The rest of us just showed up and tried not to fall asleep. Nobody wanted to fail, of course, because that meant repeating: another long semester of watching all those olden-day people starving and being diseased. At least regular History has battles; Scarcity was just depressing.